For years, I hated when patients would ask if I had children. I consider myself to be a good pediatrician and trained at a highly rated medical school and residency. I work hard and I care for my patients. I can, however, be socially awkward and did not start dating until later in life. At its most innocent, the question triggered inadequacies about my social and personal life. At its worst, it triggered depression and anxiety around infertility, and I worried parents did not trust the care that I was providing. What I have come to realize is that while I was good at the science of pediatrics, I did not understand the art of parenthood.

I was late to come to motherhood. I did not marry until I was thirty-one and held onto the notion that my career should be settled before I had kids. We did not even start trying to conceive until I was thirty-five and then quickly learned that we were an infertile couple. The pathway thereafter was long and bumpy, but we adopted our oldest son just months before my thirty-ninth birthday. This is all to say that I had more than a decade of experience as a pediatrician before I became a mother.

As I am sure that most parents find, I was immediately changed, but it was not until I returned to work from adoption leave that I realized how differently I would approach my job. Suddenly the droopy eyes of mothers to newborns did not just signal fatigue, but of uncertainty, overwhelm, and trepidation. “Worried well” visits were no longer just a quick, easy visit to provide reassurance, but a chance to teach parents and delve into what real concerns may be underlying their reason for coming to the office. The challenge of a child with behavioral problems took on a new light of how the behaviors may be influencing the entire family dynamic and not just the dynamic influencing the behavior.

Instead of providing recommendations based on my education alone, I could also add alternatives based on experience after “expert advice” failed for my kids. I connected better, commiserated more, and, most importantly, I understood the feedback that parents really needed.

“You are doing a great job.”

“You really have a great kid.”

One of the first times I really provided feedback from my heart to a mother of a maturing lovely young lady, I saw the mother’s eyes fill with tears of gratitude and, most importantly, relief.

Motherhood certainly changed who I am as a person but took me to an entirely different level as a pediatrician. I could not fully understand this prior to having children. Residency taught me pediatrics, but my sons taught me how to be a pediatrician.

Sara Silvestri is a pediatrician.

Words of advice from a chief resident [PODCAST] 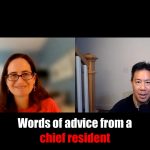 A memoir of misunderstanding, loss, and learning

How becoming a mother made me a pediatrician
1 comments