I was in my fourth year of medical college in psychiatry electives. I remember my professor discussing a young boy, an A-grade engineering student diagnosed with depression one year back and now was admitted in the psychiatry ward with severe depression with psychotic symptoms. I saw the boy, a tall, dark, handsome face — just like my brother. A different kind of fear hit me that day. I saw my brother in him. I had not talked to my brother for many days. Our conversations had always been sparse, but now it was worse. He wouldn’t pick up my call, and even if he did pick, we barely had any solid conversations.

My brother always talked less. As a child, he would prefer sitting in front of the TV for hours or playing games on the computer rather than talking to people. I didn’t have a good rapport with him. When we were kids, we always fought over the smallest of things. He was the stronger and the angrier one, so I always got beaten up by him. As we grew up, we didn’t live together much as we were out in different boarding schools. We are just two years apart in age, and yet we failed to develop a friendship, and I didn’t have any sisterly feelings for him until much later.

After seeing the boy in my psychiatry rounds, an unknown fear had lingered over me for months. I had an instinct that maybe a lot of things were not OK with my brother. My brother had been pursuing mechanical engineering back then; he was a genius boy. But, he didn’t talk much about his college with our parents or with me.

Then one day, my mum called me and told me that she had to tell me something my parents had been hiding from me for a few months. I had a conversation with my mother, followed by an emotional outburst with my brother. My life has never been the same since that day.

My brother had been living with depression for many years by that time. Perhaps, all those years, he himself couldn’t comprehend what he was going through. In all those times when we thought he was indifferent to us, he was drowning in the sea of misery. When we thought he was busy in his college life, he was living in a lonely mess. He hadn’t attended a single class; he hadn’t made a single friend. He never gave any of his exams; all he did in those three or four years was live in a dark room and drink and smoke his loneliness away. He had even tried ending his life. He had ended up in hospital after drinking bottles of alcohol. And he had started smoking packs of cigarettes every day.

After my brother confessed his depression after having endured all of it alone for years, he was taken to a psychiatrist. He left his college and started living with my parents. It has been six years since his diagnosis. He is under medication. His depression hasn’t gone away. There are highs and lows. There have been times when he has tried to jump off the terrace, or in a rage, he has hit my dad. But, at other times, he looks OK and converses well. Now, he is teaching in a school, and we are happy that he is trying and he is doing the best he could.

In a society like ours in a developing nation, mental health always comes last. But, I am proud of my parents. They have tried their best to understand my brother. Nonetheless, it has hit my father differently. In our culture, parents put their blood and sweat into building the life of their children. In return, all they expect is to get a peaceful and decent life, and it has hurt them like hell to see their son in this state. My father, once a strong and vivacious man, has lost all his charm. He is the most emotional one among us; he has been affected the most. My mother, still unaware of what depression actually is, copes better than us.

I, on the other hand, have been living with this fear, fear of depression. I have seen my brother turn from a promising young lad to the state where he is today. I fear a lot of things. I fear my dad might slip into depression. I fear I might go into depression one day. I fear my family history, severe depression in my brother, my cousins and suicide in my first cousin. I can’t see psychiatric patients in the hospital without having a nervous breakdown. I feel dysthymic mostly. The worst part is: I can’t even share my fear with my parents. They have already faced so much, and now they are old and tired. I can’t go to any therapy because we don’t have one in our country.

However, I try to redirect myself each day. I try to focus on my career and my life goals. I try to counsel myself every day, but the fear of depression hovers around my mind each day.

The art of diagnosis 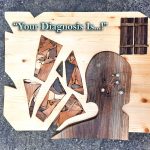 A summary of state of the art COVID treatment

A doctor’s fear of depression
1 comments