“We can’t sit in the stands – we have to get messy and play on the field.”

The casual observer, the season ticket holder, the player, and the coach have very different levels of knowledge, skill, and passion for a professional sport. The casual observer may be confused, not even understanding the fundamentals of the game. The season ticket holder likely has some experience with the sport, possibly playing as a youngster or in high school, and has invested time and money in a team. The player has developed advanced skills to succeed playing the game, yet may need extra motivation (perhaps in the form of bonus money or an extended contract) to perform at the highest level. The coach must consider overall strategy while managing players and answering to the general manager, the owner, and the media. Talk about getting messy!

On top of this, America has a culture of impatience. We want to get on with it, not wait in line. And these cultural demands place additional expectations on everyone involved with the game, from the occasional visitor to those who breathe it day in and day out. The game will see its share of victories and defeats, triumphs and tragedies. But it is through the combined efforts of everyone involved that true chemistry is created and progress can be made.

Consider viewing the assemblage from a distance to gauge the level of intensity and fervor created in the game. If you had a seat on the Goodyear Blimp, could you still hear the shouts and screams of the fans? Would you see the “the wave” making its way from section to section in the stadium? Could you follow the action on the field without binoculars? It depends on your understanding of the game’s rules and the players’ positioning on the field. The game of health care is changing whether we like it or not.

The high-value patient-doctor relationship should be the fundamental principle behind any new model of health care. To me, the most appealing version of the game is “best school,” combining tech with the values for patient engagement that attracted us to health care in the first place.

Many patients, doctors, nurses, and health care administrators appear to have a seat on the blimp with little concept of how the game has evolved over the years and is being played now. They may have attended the game in the past, but they likely haven’t seen the action from 5,000 feet above the field—and seeing the health care picture from the big picture distance can create some impetus for adapting to the new rules. We need to not only explain the new rules of the game but also show how passion of the team can overcome adverse conditions and ultimately prevail. Everyone on the blimp needs to become engaged, including those who have been riding involuntarily.  The health care game has changed. We will find season ticket holders. And those of us on the field will get messy, no doubt. But who knows? Our game might just become a national pastime.

How doctors think about financial independence is dead wrong [PODCAST] 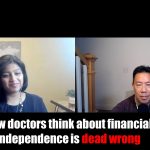 How to tell someone their loved one died