Cities across the country, including Chicago and New York, have announced reopening — Broadway will be full capacity soon. This is at the same time as the pause on the Johnson & Johnson vaccine has lifted, walk-in vaccines are available around the country, and 107 million Americans are fully vaccinated.

A positive side effect is that millions of health care workers worldwide are looking forward to some relief from treating extremely ill COVID-19 patients. I know, because I am one of them.

But a new poll saying many Americans will refuse to be vaccinated is just one more gut punch for an overextended, exhausted health care workforce.

The study also shows that hesitancy is linked to lines of work. Those who work in blue-collar industries such as construction, farming and mining demonstrated the greatest hesitancy, close to 46%. While those in health care and teaching industries demonstrated some of the lowest, between 8.5% to 20.5% in some areas.

Misinformation, fear, accessibility and bias all play a role in vaccine hesitancy. But this is not new.

A 2020 commentary in the Center for Strategic and International Studies offers the context that vaccine hesitancy and the spread of misinformation is nothing new and has been around since the inception of the smallpox vaccine in the 18th Century. But vaccine hesitancy is more prominent in the last 25 years.

A recent report from the Center for Countering Digital Hate found that over 65% of the anti-vaccination rhetoric shared on social media originates from only 12 individuals. But it has been viewed by up to 29 million individuals in one month alone.

These 12 individuals have often violated Facebook, Instagram, and Twitter’s policies but have remained on at least one platform or another continuing to share posts. These posts include false claims and conspiracy theories that the COVID-19 virus itself was lab-engineered, that having children wear masks is considered child abuse and that COVID-19 vaccines have caused thousands of deaths and female infertility.

This content only further perpetuates vaccine anxiety, fear and confusion. And although advertising campaigns from brands, as well as the Ad Council and Covid Collaborative have launched national campaigns to promote vaccine education, the response has, perhaps, not been fast enough. That leaves weary health care providers to defend the science to resistant patients.

As a physician assistant (PA) and director of advanced practice at a large academic hospital system in Chicago, I have lived the last year dealing with the ravages of COVID seven days a week, 24 hours a day.

As health care providers, we left partners, children, families, and friends at home to care for some of the sickest patients with a deadly virus we had no control over. We gladly and dutifully perform whatever duties are necessary, as the work itself is fully rewarding. But it has been at a personal cost.

In a recent Washington Post-Kaiser Family Foundation poll of more than 1300 health care workers, 62% of respondents indicated COVID-19 has had a negative impact on their mental health, with the highest percentage among those aged 18-39 which ranged between 71-75%.

Some of the biggest worries included fear around contracting the virus themselves (21%), wearing PPE (16%), new and changing rules and safety protocols (8%), and being overworked (7%).

Even prior to the pandemic, burnout among health care workers had been a growing concern for some time. Burnout, which includes emotional exhaustion, depersonalization and a low sense of personal accomplishment, can have significant consequences for healthcare workers and their patients.

A study of medical students, residents, and physicians published in Academic Medicine suggests that physicians who experience burnout may have higher rates of depression, suicidal ideation, and substance abuse.

Burnout may even cloud a physician’s professional judgment, contribute to poor decision-making, and possibly lead to medical errors. Additionally, data from a more recent NurseGrid Survey showed that nursing self-reported burnout had increased more than 25% post-pandemic to a whopping 61 percent, and almost 20% of nurses from a December 2020 survey reported they were considered leaving nursing altogether by 2021.

The continued rise in vaccine hesitancy likely means that health care workers will continue down the tunnel of exhaustion for the foreseeable future.

It is not possible to change every resistor’s mind, but continuing to provide emotional support to those who are scared, talking openly about the known and unknown risks, and providing facts honestly from reputable sources, it is possible to combat misinformation.

Sharing positive vaccination stories openly and often can make a powerful difference. It’s worth a shot.

How to leverage social media to combat misinformation [PODCAST] 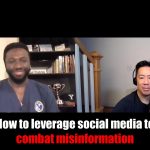