In March, thousands of medical students received their residency match results. For most specialties, match rates for graduating U.S. MD seniors have typically remained above 90 percent. This almost certain job security is what allows most medical students to consider taking on astronomical amounts of student debt.

The individualist message is clear throughout medical school: Focus on yourself, your achievements, and hope for the best.

Absent from these discussions is the possibility that your residency could simply cease to exist. The closure of Hahnemann University Hospital should be a striking reminder that no matter how seemingly noble or virtuous the profession, its goals, or individual workers, nothing is free from the reaches of capital.

It is an unfortunate fact in America that hospitals close all the time. The number of rural hospital closures have been rising since 2010. In the last 10 years, 7 percent of all rural hospitals have closed, with 1 in 4 at risk of closure. Residency programs also can close, with a major impact on the local community, especially rural ones which disproportionately rely on such care.

It’s one thing for a poorly funded residency program to close at a struggling rural hospital. Still, entirely it’s another for a large university hospital with all associated residency programs to close. Hahnemann University Hospital was the main teaching hospital of one of the largest private medical schools in the country — Drexel University College of Medicine. The hospital itself was a historical institution — the country’s first safety-net hospital and Philadelphia’s first level 1 trauma center. Residency programs at Hahnemann had not been struggling to fill.

For all of its history and prestige, it couldn’t avoid the economic pressures that faced all hospitals across the country. These are the same pressures that existing hospitals continue to face.

Since the 1970s recession, the legislative focus in health care has been that of cost containment. Under the Reagan administration, Medicare, maternal/child health programs, and the Department of Health and Human Services experienced drastic funding cuts. These cuts produced no tangible savings for the government but had a massive impact on hospitals, especially safety-net hospitals. Hundreds of community health centers, rural and urban hospitals closed between 1980 and 1991.

One way that hospitals dealt with this financial pressure was to add residents to the hospital’s labor force to control costs. Residents are famously underpaid, overworked, with little ability to bargain for better working conditions, and subsidized by the government at approximately $100,000 per resident.

By 1993, Hahnemann’s finances were such that they were open to acquisition by Allegheny Health Education and Research Foundation (AHERF), seeking to add residency spots. After a period of aggressive expansion AHERF filed for bankruptcy with $1.3 billion in debt, selling Hahnemann and other Philadelphia hospitals to Tenet Healthcare. Tenet, too, eventually divested itself of these unprofitable hospitals — closing them (like Medical College of Pennsylvania Hospital) or selling them (like Hahnemann). Without fundamentally changing the structure of how health care is paid for and delivered, these buy-outs and mergers could not save Hahnemann from its ultimate fate.

Although state law mandates 90 days’ notice for a hospital closure, AAHS filed for bankruptcy and closed in half that time, with zero regards for the legal nor moral obligations to the community that the hospital was supposed to serve. Nothing was more blatantly indicative of AAHS and Harrison Street’s intentions than when the hospital real estate was “separated from the operating businesses and was excluded from the bankruptcy filing, which further cemented suspicions that the involved private equity firms looked to profit off the land once the hospital closed.”

Despite the public outcry about Hahnemann’s closure, few pointed out that a near-identical scenario had played out 16 years prior under Tenet Health. Medical College of Pennsylvania Hospital was shut down in 2003 after years of unprofitability, nearly orphaning over 200 residents employed by the hospital.

Had Tenet and Drexel failed to reallocate these residents to other sites, it would have been the largest single loss of residency spots in history, but Hahnemann’s closure dwarfed even that potential historic disaster. Hahnemann had 100 more beds than MCPH and employed over twice as many residents (571 residents and fellows, including 132 new interns).

Joel Freedman, the now-infamous CEO of Paladin (parent company of AAHS), unsuccessfully attempted to rent out the empty hospital for one million dollars a month during the first wave of the pandemic. A year after the hospital’s closure, it finally appeared on the real estate market. Grotesquely, the historic safety-net hospital was marketed as a “generational opportunity.” Although the seller expressed a preference “to try to seek out potential health care uses,” they admitted that “the properties also lend themselves to new development.”

If Hahnemann’s closure was the canary in a coal mine, as so many claimed, what did we do with this dead bird?

If I mismanage a patient’s care as a physician, I might be sued, fired, lose my license or jailed. But those who mismanaged the care of a hospital that cared for tens of thousands of patients walk free. Joel Freedman will even get to write off the real estate depreciation on his 2020 taxes. Private equity’s reach into medicine has not slowed down. Little has changed, except for the worse, for students who suddenly lost a major training site, the residents who were stuck in limbo for months, the essential workers who lost their jobs, the thousands of patients who lost their hospital, and the other Philadelphia hospitals scrambling to accommodate them all.

Closure of the Hahnemann University Hospital was not, and will not, be an isolated incident as long as the profit motive exists in our health care system. Private equity’s insidious creep into health care is undoubtedly a worrisome trend, but it matters little whether the commodification of a basic human need is driven by predatory private equity firms or by “non-profit” institutions seeking to expand and enrich itself. It is perverse that a hospital — any hospital, but especially one dedicated to serving the poorest and the most vulnerable patients — must turn a profit to justify its existence.

Under our existing system, workers, regardless of skill or expertise, will continue to be treated as mere assets to be bought and sold, as AAHS explicitly attempted to do with the GME residency spots. “Unprofitable” care will be stripped down and abandoned regardless of human cost.

Unscrupulous billing practices will load patients with medical debt. Profit incentive will always lead to decisions that financially benefit the shareholders, at the expense of both patients and workers, often in ways that are antithetical to what should always be the primary, humanistic goal of health care — healing the sick.

For the love of baseball and music: a Boston Hope Music story 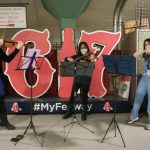