When the pediatrician woke me at midnight to get a blood test from my three-month-old son, I knew things were serious.

I should have known this already. Four weeks prior, my four-year-old daughter passed along a respiratory virus to my husband, me, and her brother. Her brother’s low oxygen level and inability to keep down milk brought him to the emergency room, where an oxygen mask was promptly fastened around his mouth, an intravenous line was inserted into his right hand, and he was admitted to the pediatric ward.

On the fifth hospital day, when the respiratory therapist thrust a tiny tube deep into my son’s nose to suction out the mucus that couldn’t be coughed up, I saw that his secretions had changed from thin and white to a tenacious green sludge. He then spiked a high fever. Inside, I began to quake. Even though I am a hospital-based medicine physician, I care for those who can use their words and exam to tell you, “I’m sick”.

A three-month-old must rely on his facial expressions, sounds, and body movements to communicate how he feels. My son’s brown almond-shaped eyes stared up at mine, shining with tears. His tiny nostrils flared with the effort to breathe around the feeding tube snaking down from the left nostril to the stomach. Recognizing the signs of impending respiratory failure, the pediatrician obtained a blood test that showed that my son might soon be unable to breathe on his own. Based on that blood test, we were transferred to the pediatric intensive care unit in another hospital. Jolting along in the ambulance, holding my son’s hand as the emergency medical technicians injected him with medicine to keep his airways from clamping down, I wondered how could I translate the clinical calm, logic, competence, and caring that I knew and had shared in abundance with strangers, to tame the fear for my son who was only three months old, new to the world and already at risk of leaving it. Anger and frustration swirled inside me. My medical experience had abandoned me; my clinical knowledge which had helped so many others could not help my son. I grasped his hand, trying to pass my strength into him. My son would decide what happened; next, that much I knew.

The intensive care doctor advised intravenous antibiotics for a bacterial lung infection which, as it turned out, my son had developed alongside his viral infection. Every two to three hours, a respiratory therapist sprayed aerosolized medication above his nose and mouth to help him breathe, and a nurse tenderly adjusted the splints on his forearms placed there to keep him from ripping out his oxygen tubes. That same nurse squeezed his diaper gently to make sure he was not wet so that I, curled up like a fern in a chair next to his bed, could sleep. These small acts of kindness warmed the cold room, soothed a frightened infant, and comforted me. Night after night, I ordered a cheese pizza for dinner, the constancy of bread and gooey cheese warming me inside. One evening, when I lifted the steaming cover on the dinner plate, a heart-shaped mountain of mozzarella, sauce, and crust lay there. News of my solo presence and my son’s plight had reached the hospital chef. The aroma of garlic, parmesan, and pizza crust wafted towards me, fragrant with their good intentions.

Even though my son was slowly improving, the surety that I would always be able to keep my child safe had been ripped away. While innocence had left, wisdom came to fill its place, redeeming its loss with hope and grace. I saw what made me a good mother is also what would make me a better doctor. As a mother, I tried to focus on the big picture but also pay attention to the details. I tried to see my children’s stories from their perspective to help us both understand how a person acted as she or he did.

Watching my son and daughter closely, I anticipated when they outgrew their toys, reached beyond their current activities, and needed new challenges. Over the next five days, as my son’s oxygen levels improved, his feeding tube was removed. I gave him a green pacifier that he sucked happily. When the pacifier fell from his lips with a bubbly popping sound, his nurse and I chuckled as his splinted right hand determinedly nudged it back in his mouth. Standing in communion, we watched him recover his spirit and strength. I remember being surrounded by a soft forest of sound, whooshing oxygen tubes, the beeping heart monitors, the swishing fabric of the curtains, the hard click of metal as the door opened and closed to let someone in. Mostly my son and I were alone, but I welcomed the solitude. Usually, the noise of other people’s needs drowned out my thoughts. Until my son forced me to sit down and be fully present, I listened with only half my attention, forming my own thoughts at the same time I was supposed to be listening. Listening meant turning off my internal monologue. Everything he had uttered, whimpered, and grunted was everything that he meant to say. When a person feels heard, then he is open to listening to you. I listened to my child breathe, snort, struggle, and laugh in his sleep. As he breathed more easily, drank breast milk, smiled impishly, and waved his hands for my attention, relief washed over me. My fear started to recede.

Having a sick child made me feel pain without giving into it and experience my suffering alongside someone else’s suffering without judging it. Caring for my son forced me to take the time to grieve and hope. It inspired me to channel my emotion into activities that made me feel whole. In the hospital, I confronted life and death; at home, I wrote essays, practiced Bach Cello Suites on my viola, steamed soup dumplings, baked cookies, taught my daughter violin, and played dinosaurs with my son. Laying my hands on someone who needed it felt as necessary as the oxygen that helped that person breathe. Through writing, playing viola, cooking, spending time with my children, I escaped hopelessness, powerlessness, and insignificance. These activities brought me home, and my children nourished my soul with their unconditional love and trust. At home and work, my kindness, empathy, and respect for the truth help me to analyze problems and seek solutions. My son showed me that certain situations require presence, empathy, and time. At home and the hospital, I serve individuals at the most vulnerable times in their lives, and these two places weren’t as far apart as they seemed. I walk between them. Because of that, I can bring the best of myself to both.

Responding to the COVID pandemic: a lesson in coalescence

Going to the molecular level to think big about cancer 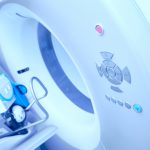