Although it was midwinter, the air coming in through the front windows of the Nissan Versa was balmy.  The radio was tuned to a local station.  It was playing Air Supply’s “Out of Nothing at All.”  This is one of those songs you turn the volume up and allow yourself the one brief moment of karaoke stardom as you belt out your lungs.  As the high notes hit, I’m feeling a strange sense of euphoria; it cannot get better than this – driving into a new city, a new job site, with new challenges and systems, people to meet, riding into the horizon as the sun rises.  This could be one definition of insanity, or cruel and unusual punishment.  I embrace it with Air Supply in the radio waves, hair flailing in the wind.

I acquired the skill of judging the size of a town’s population by the presence of Walmart.  This town has one only because it serves a micropolitan area.  However, its rich culture, heritage, and history make up for its size.  Known for spices, this wetland draws its identity from French, Spanish, African, Acadianian, and Caribbean ancestors.  These are the places that keep me fascinated.  They carry lessons on diversity that are not celebrated nearly enough.

It was comparatively small.  In its sleepy hollows and meandering bayous, there is room to breathe.  People smile.  They acknowledge you as if they know your family.  There is no hurry to be anywhere.

It’s a step back in time as the aging grace comes into view.  This general hospital was built to serve the community.  In a sense, she still retained the nuances of the traditional, modern medicine notion of a place of healing, strongly tied to the catholic order of nuns who made caring and healing their life’s mission.  A grassroots effort where local doctors made alliances with the state, the county, local businesses to take care of the sick and the vulnerable.

The history rolls through her hallways, down the walls in the color of the lime green tiles and white-washed paint one comes to associate with sterility.  The wood paneling does not belie her age.  There are lessons etched in the lines and grooves, telling generations of patients, their stories, the lives she has taken into her fold, and the many babies born within.  The nuns have long gone.  I see her heave and sigh, whisper, under the ebb and flow of humanity as they come through, welcoming all who seek refuge.  I smile, greeting an old friend.  She stands, a testament to a bygone era.

The last time I saw lime green tiles was when I was in New York at Creedmoor as a medical student.  I mused then, macabrely: I’m sure people have secretly died here.  Complicit with this picture of the old general hospital was the secret second level where the elevator does not stop unless you knew the special code.  2-11.  This floor led to the corridor that opened into the surgical suites.  She concealed the doctor’s lounge, where tasty hot meals are still served daily, where nutter butters and saltine crackers are stashed for those late-night call cravings.

How does this place still exist?

What other secrets did the general hospital keep or is she a secret to be kept amidst the slow tsunami push towards standardization and cost containment?

Within her cloister, I meet Inez Wilson, a demur, gentle soul from an even smaller town 10 miles away.  She had a wizened face, smooth with lines and grooves not unlike the ones of the general hospital.  Other than a minor heart issue, she had survived 87 years without having been ravaged by diabetes or heart disease.

I ask the usual standard questions.

“No, I don’t drink or smoke,” she smiled with her eyes (in this COVID new normal, I learned to read eyes).

“You don’t look a day older than 60,” I jested.  I love this population.  They’re appreciative, respectful, full of fun.  They are unapologetic for living.

“I went from cotton picking to house cleaning,” she said.  Her eyes lit up.

Inez Wilson came from a line of cotton pickers, starting with her grandfather.  The family earned the right to keep a small plot of land where they subsistence farmed and became self-sufficient.  Her father lived until his 50s.  Cancer took mother in her 60s.  She raised three children.  Industrialization quickly arrived by 1946.  Cotton pickers were replaced by mechanized harvestors.  Inez had to reinvent herself.

We are at a threshold, not dissimilar to the one Inez Wilson stood over as she looked far into the cotton fields and saw her replacement looming.   Human interaction is quietly discouraged, big data is king.  We can now use technology to care; we can teach a computer to be better versions of ourselves.  The general hospital is whispering; I can clearly hear the words.

The principles of medicine, after all, do not change.   There are fewer and fewer who want the life of the obscure to enjoy the riches of the soil.  Slowly, I see the face of Inez Wilson, the general hospital itself, dissolving away.  In its place stands the International Classification of Diseases; lives worth more by the addition of Hierarchical Condition Categories.

What will the next industry disruptor bring to the face of medical care?

As I get into the rental, bound for the airport, I look into the mirror.  Without innovation, there cannot be progress.  The old ways were the best at the time they were invented but must give way to new.  I do think of the cost.  I wish there was a way to marry innovation with traditions, to blend skill with the history that made those innovations possible.  People forget.  We do not have the memory of elephants.

The plane takes off as the sun rises.  A new day dawns.  Another journey awaits for the small band of itinerate doctors who have stethoscope and will travel. 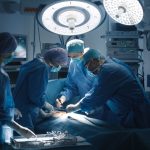