Like many surgical specialties, the one I was aspiring to is a male-dominated field. As such, all my colleagues were male, and I often felt as though I was trying to be a part of a boy’s club. I shed my intrinsic femininity and instead equipped myself with diplomacy, banter, a light-hearted attitude, and contagious enthusiasm.

I knew nothing about the footy, and I hated beer, but I was witty, I had a good sense of humor, and I consistently went above and beyond to help my colleagues. The work was not easy, and the hours were long – but I looked forward to it every day. All the warnings I had been given cautioning me against a surgical career seemed far-fetched.

However, despite my efforts to mute it, my second X chromosome functioned as a glowing red target on my back, and I became exposed to the sexism present in medicine that I was often warned about.

1. “Janine (a resident) kept trying to take my theatre time when I was her registrar, well, you know I made sure she never did that again! I made sure her career was over.”

3. “Why do you think he keeps asking you to adjust his catheter?”

4. During my evaluation: “You are very good … one of our best … but you will never make it as a surgeon. You are too opinionated and loud. The bosses think you are whiney. You are a woman, and you need to learn to put your head down and get the work done. I’m only telling you because I care about you.”

5. “You know Shaun (my immediate senior colleague) would have slept with you if you had let him?”

After the first statement, I politely half-smiled.

After the second, I stood silently with a stern expression conveying disapproval and disbelief, whilst my five male colleagues laughed hysterically.

After the third, I walked away in silence.

After the fourth and fifth statements, I excused myself, found a nearby bathroom, and cried until my eyes were raw.

I cried at the unfairness of it all.

I cried because all my efforts, my passion, my personality, and my worth had ultimately been reduced to my sexuality.

I cried because I had, with great difficulty, fought myself out of an oppressive cultural upbringing as a child, only to find myself in a similarly oppressive environment in the illusory Western world.

I cried because I was plunged into the same emotions that I was forced to navigate after I was sexually assaulted as a fourteen-year old – I felt weak, helpless, dirty, and angry.

I cried for all the women before me who had experienced the same.

And I cried because I was crying – how could I be so weak? If I was crumbling now, how dare I think I could ever become a surgeon. I was warned this would happen. I was told to brace myself and be resilient. When did I become so weak?

Working in an environment where you are continually objectified can eat at even the grittiest trainees. I made myself small. I wanted to blend in. I wanted to disappear. I was told repeatedly: “They don’t want trouble-makers in surgery.”

Where I was initially the breed of resident who asserted themselves when subjected to rude or unprofessional behavior – I now felt that I was not entitled to be treated respectfully, and accepted a newer, lower standard of interactions as my ‘new normal’, which only lowered my self-worth. I second-guessed my decisions and lost my confidence entirely. I felt disempowered and hopeless.

I blamed myself for being too easy-going and hence “inviting” the sexually charged comments. I grew a “work-skin” and limited my interactions to only those necessary for good patient care. No more banter and no more friendly checking in – I didn’t want to encourage any unprofessional behavior.

Work became heavy and dry. Walking from the carpark to the hospital, I felt like I had weights tied to my ankles. I felt lost. I barely slept four hours a night for two months.

Ultimately, I spoke up and the organization was receptive to my feedback, though this was not without collateral damage and a warning that real change takes an agonizingly long time to be achieved. Frustrated and morally injured, I packed up and moved in search of a fresh start. I took stress leave and connected with my GP, a psychiatrist, and a psychologist.

Whist I am thankful for the support I received, I also acknowledge and ache for those in similar situations who:

During our first session, my psychologist said: “You need to accept that the world you work in is inherently unjust.” This sounds counter-intuitive, but her words helped me breathe easier.

I had been carrying the weight of the injustice shown towards females in the medical workforce for months. I felt obligated to speak up to ensure that no other person experienced what I had, and I felt responsible and representative for my female colleagues. When things did not immediately improve, and when I found myself in similar situations again – the weight increased.

It takes more than me to fix the system. We are fighting a system that has been ingrained in our culture for decades. Minorities cannot shine in the system as it is currently because it is catered to an entirely different shape of trainee.

We can start by choosing to advance the right trainees, those who are deserving, those who are passionate, humane, empathetic, and those who genuinely care for their patients, and ostracising those who speak up is counter-productive to this agenda.

We must support and empower our colleagues in speaking up. This ensures that, over time, unacceptable and unprofessional behavior is systematically eliminated.

“The crucial point, ethically, is to observe how much of one’s success and happiness are due to luck – and then feel committed to canceling the worst disparities in luck on that basis.”
– Dr. Sam Harris, neuroscientist and philosopher. 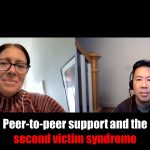