The mood hung in the air like a clenched jaw, a clenched fist, and slumped shoulders. I watched a fellow patient shuffle by the nurses’ station with his little paper cup. You know, the ones that are an inch or two tall and wide with a slight lip; the kind you see strictly in hospitals. I knew it was brimmed with multiple meds the colors of the rainbow. And, of course, there had to be the red ones: the laxative that we all were prescribed because our medications were so constipating.

It was a beautiful and sunny day outside the hospital; the birds calling their mates or to hear themselves, who knows. The lazy summer breeze moved the tree limbs and looked like they were dancing. The drone of the cicadas that only hatch every 10 years provided the melodramatic theme song of the movie I seemed to be watching. Was it a movie? No, I reminded myself. I am here. This is real. I am in my body.

I sometimes forget the difference between the world within and the world without. My gaze goes back to my fellow patient. He was tall with a hollow absent looking pale face wearing light blue pajamas that were slightly wrinkled and brown sheepskin-lined slippers that shuffled with a noise of swish, swish. If he was going faster, he might have looked like he was on ice skates. No, he looks more like he is trying to walk on ice. The difference being his arms were lax at his side. My view of him is blurry as I look through the screened window. I am outside on the smoking porch, feet up and slouched in my rattan chair, feeling rather like poured concrete. I shouldn’t smoke, but it is better than killing myself right now, I guess. I watch the ash of the cigarette as it becomes precariously close to falling on the concrete porch floor. I watch it fall.

Someone told me my fellow patient was a doctor at one time. He came here for electroconvulsive therapy. He often didn’t know where he was or where he was going. They said he couldn’t remember his own family sometimes. The therapy erased his memory so. He was once a doctor? It was hard to believe this shell of a man who now just shuffled around the day room was once a surgeon with a busy practice. He must have been smart and quick and steady to get through medical school and training to be a surgeon. How far down in life could one go? Pretty far, I guess. I remind myself that I was once full of life and a busy, busy obstetrician-gynecologist. That seemed so far away now. How far had I gone away, I thought? How far down would I go? I couldn’t tell.

We eventually got the news that Dr. Rathburn had hung himself from one of those beautiful trees that the wind made dance. How sad. It adds to my own grief. Who had found him?  How did he look? Babies born with a nuchal cord have the cord wrapped around their neck. That’s the closest I have seen to a hanging. I once delivered a baby who had it wrapped around three times, and by the time he was born, his little face looked bloated and bruised, tongue swollen and sticking out, and he had petechiae (small dots of microscopic veins that burst) on his face. I wonder if he looked similar. Did he have petechiae? How would even do that? I wish I knew. I wish I had said goodbye. I wish the image of him shuffling by me would leave my head. Would every warm and beautiful summer afternoon with the tree limbs dancing remind me of him; of this place; of this horrible feeling? That was something to look forward to. At least I was thinking of a future. That had not been possible just a few short weeks ago. When it’s dark, it is bleak, like black silence and extraordinary effort to move and operate the body. The pain of my empty feeling heart and just holding my head on my neck seemed unbearable at times. Right, I am here, and I am feeling better. At least the empty blackness is gone most of the time. I light another cigarette. It’s better than crying.

Dr. Rathburn, you haunt me still. I was so close. It could have been me.

I am an orthopedic surgeon who decided to stop taking insurance

The lungs and the common good 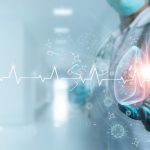 A physician hung himself. That could have been me.
3 comments