An excerpt from Universal Death Care.

Machine gun fire ripped me open—From Left to Right. There were too many bullets. No way could I feel each wound. They blended together like a single strike of lightning. I was paralyzed by pain. It had taken root in me. The sorrow at what I had lost was so pure and consuming that I knew it belonged to everyone—it was the same sorrow all of mankind had experienced throughout the ages. At first, I only tasted trauma — oppressive and manipulative. The trauma murdered my soul, and then I felt sorrow and evil rip my guts out, From Left to Right. Most dreams are nonsensical, just a product of the imagination and others are so grounded in reality that the mind remakes the moment, trying to master it. These nightmares become visceral. They have their own life.

When I shot up out of bed, I reached for my weapon and chambered a round, and then my eyes focused on my stomach. The pain was still there. My clothes were intact but soaked in sweat. There was no blood, no wound. I had never experienced anything that powerful while sleeping, and while I had no idea what it meant, I knew something was very wrong. It was adrenaline, fear, anxiety, empathy, and a horrible innate sense of self-preservation that was tearing me apart.

I was not equipped to process whatever happened to me, so “sleeping” was no longer an option. The nightmare continued to surface in flashes since the locals were still celebrating my arrival with sporadic mortar fire. Everyone expected me to pass out and be unaffected by the noise after spending a week traveling from Camp Pendleton, California to Fallujah, Iraq.

I put on my clothes and went to the communications room at Recon BN to ask if everything was okay. And while it should have been abundantly clear that nothing would ever be “okay” again, my goal was set—I could make others’ lives better. I needed to bring some humanity, love, compassion, and talent to this war while trying first to do no harm.

The Marines probably thought I had suffered a head injury because I kept asking the one manning the radio, “Is everything okay???” They replied that everything was fine, but they had to be mistaken because my stomach felt like I was about to give birth to an alien; it clawed at my insides. Since I had only met a few people in the battalion at that point, several Marines were already questioning the sanity of their new Battalion Surgeon. By the grunting in response, evidently annoyed, I decided to go back to my room and try to sleep.

The adrenaline electrified my body, and my soul knew that this was not a coincidence. It meant something. I got up again and went back to the communications room, asking if everything was quiet.

They assured me it was.

I tried to familiarize myself with Recon BN and got ready for duty. I wasn’t hungry, but I asked where breakfast was anyway, then headed in that direction. First, though, I checked in with Fallujah Surgical, the makeshift building where traumas were stabilized before the patients could be transferred to a higher echelon of care in Baghdad. The building wasn’t suitable for livestock, let alone surgery.

There was blood on the floor of the central “stabilizing bay,” which was a tight 400 square feet, plus a “Surgical Room” that was not fit to dissect worms. There was enough space for two patients in the stabilizing bay, which were filled with Iraqis and a mess of medical personnel tending them. I believe one was an adult who had been shot in the leg. The other was a child, about 11-years-old, who had been nearly sliced in half at the waist by a Marine’s machinegun fire, From Left to Right. The child was writhing in pain as the medical assets were doing everything possible to save her life. In the chaos, she singled me out, and I looked at her. We both knew something about the other that we could not identify. Her initial resuscitation was almost over, and she was about to go into the Surgical Room for further stabilization. All I could do was stand there while a flurry of activity coursed around us. Her stomach was filleted open, and while mine was intact, we shared a moment that defies logic. She knew that she was about to die at the hands of the very people who wounded her.

This is so wrong.

You’re supposed to have decades left to live at eleven, not seconds.

Few things in life have hit me as hard as that moment, and the incident changed the course of both of our lives. She endured a living hell during the resuscitation, and then the recovery afterward. For me, the brutality and senselessness of that scene – the innocent little girl with her stomach ripped open, the medical personnel trying desperately to save her life in an inadequate medical facility – shook me to the core of my being. Even today that scene is vivid in my memory and it has helped shape my conviction that medicine must be about providing the best possible medical care as and when needed and not be driven by greed or hobbled by bureaucracy or manipulated by attorneys. That day in that makeshift surgical center, medical personnel did everything in their power to save that child and nothing else in the world mattered. Contrast that with American veterans who today, in the USA, cannot get adequate treatment for the physical, emotional, psychological, and spiritual wounds they suffered doing the job their country called on them to do because of government red tape, frequently capricious decisions by non-medical clerks in insurance companies, or litigation that drive doctors to practice defensive medicine to try and protect themselves from lawsuits. In Iraq, in a war, in substandard conditions, an Iraqi child’s life was all that mattered. There was a time in the USA when that was also the prime directive in medical care. That time has come and gone. We need to get it back.

My own dream-induced pain started at the same time this child was mowed down. Then and there is when and where my faith in God died because God, the higher power, had allowed this unspeakable nightmare to happen. My hope for the future evaporated, all while helplessness chewed through my guts From Left to Right.

This was the same moment I realized that humanity is connected in a definitive, tangible, and spiritual way. A trigger-happy and scared Marine was likewise connected. He made an understandable mistake in the heat of the moment and accidentally destroyed this innocent little girl. His solitary action grew into horror, altering all of our lives. We are all intrinsically connected, and yet, we point weapons at each other, pulling triggers, and then we deal with a fragmented, amputated existence. War eviscerates us all.

Reagan Anderson is a dermatologist and author of Universal Death Care.

You have options when it comes to board certification 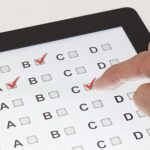 The trauma of a combat doctor in Iraq
2 comments