An excerpt from Right Brain Rescue: One physician’s journey from burnout to bliss reveals the creative muse in all of us.

I was about to perform reconstructive surgery, to change someone’s life forever. My hands were posed above the body, and my knees felt wobbly. I inhaled briskly, and the scent of the sharp, sterile air shocked my lungs. Suddenly, I was acutely aware of all my senses: the scratchy fabric of the standard-issued uniform against my back, the thud of my heart against my rib cage, the leftover taste of a ham-and-swiss sandwich in my mouth. Music softly played in the background, the song “We are the World.”

It was 1984, and I was about to complete the world’s first nose transplant. I was only nine years old.

“Hold still,” I muttered to my own pair of trembling hands. I reached forward, extending a gloved fingertip to adjust the contour of the patient’s nose. I gently straightened its bridge. “There. Much better,” I commented to the staff in the operating room. Crowds had gathered to witness my unusual surgical techniques. I stepped back and tilted my head to the side for better perspective.

“Almost, but not quite,” I uttered. I smoothed the left nostril edge to match the right. “There. Perfection!” I proudly gazed at the majestic nose I created, as if stolen from a Greecian statue.

Triumphant, I backed away from the operating table. There was a collective exhale in the room and then a flash of newspaper cameras and thundering applause.

Without warning, the patient wiggled right off the operating room table and the fictitious crowd vanished. The fresh Silly Putty “nose” slid off my little brother’s face and bounced to the ground. He darted down the hallway as the only surgical assistant—my sister—shrugged.

With the fantasy completely over, I chased after him, but Grandpa’s hallways were labyrinthine. His home was an enormous collection of mystery, each room guarded with a heavy door and intricate doorknob. My hands twisted each one desperately as I peeked into vacant rooms, searching for my escaped “patient.” Opening door after door, revealing rooms like backdrops to different movie genres: sticky pleather couches paired with a faded avocado green rug (seventies drama). A utilitarian desk topped with mountains of invoices and a huddle of half-empty coffee mugs (mystery/suspense). A kitchen with flour scattered on the floor and broken eggs (comedy).

Finally, the last room. The horror genre. I opened the door slowly.

Rows of shiny caskets were arranged as neatly as a parking lot. Suddenly, my brother emerged from behind a funeral wreath, giggling as he skirted past.

My childhood wasn’t quite like others. While my grade school friends’ Barbies drove shiny red corvettes and lived in extravagant dream houses, mine slept in mini-coffins and had pretend funerals. In middle school, my friends had grandparents who baked cookies and smelled of vanilla and cinnamon when they gave hugs. An aroma of formaldehyde and methanol wafted from my grandparents with each polite nod.

If you have one hour left to live, spend it in a funeral home. It would last forever.

As a kid, most of us could fill that hour easily. We were born masters of play and quickly filled in the blanks with our imagination. We love Mad Libs, Choose Your Own Adventure books, and the two words “free” and “time”—the “negative space” that remains an essential element to any creative endeavor.

Sometime after we hear, “The floor is lava,” but before “Can I see your ID,” we change. Adults wouldn’t know what to do with the gift of an hour (probably spend it “unsubscribing” from email lists). Adults don’t do well with fill-in-the-blanks or empty canvases. It makes us uncomfortable, so we fill the space. We clap during the silence between orchestral pieces. We oversaturate our photos with filters. We impatiently ask, “So when are you getting married?” as soon as our friends are dating (and then follow with “When are you having a baby?” after they throw the garter belt).

Growing older, we don’t feel the shrinking of our imagination at first. It’s silent and impalpable, replaced by the well-rehearsed confidence of maturity. Adulthood is marked by knowing. Deciding. Analyzing. Leaving space for wonder and curiosity is simply too risky and unknown. Having negative space is acknowledging there is no answer, but many possibilities. It’s admitting you have a choice in what note to play next, which word to write or color to paint.

Negative space is where the magic happens, and adults rush through it. What finish line are we rushing toward? Death? In my childhood, death was an invisible force that could fill those negative spaces without warning. Grandpa’s house of movie genres would be transformed overnight into a gathering where everyone stared at a big, open box containing a sentimental gift inside. Death was kinda like a bizarrely goth alternative Santa Claus that reminded everyone to make use of those wondrous spaces while you had them.

Decay is our measuring stick. Doctors, morticians, and artists all calculate their impact by comparing against this expiration date. When your body slumps before a doctor—a sickly heap of fever, cough, and phlegm—you are essentially asking, “Really, how close to Death am I?!” Similarly, as your cold body is on display before a mortician, your question is, “How close to Life can you make me look?”

This job belonged to my mother.

As a young girl, I’d stand on my tiptoes, craning my neck to watch her sweep cerulean eye shadow across lids and smear foundation on sunken cheeks. While my high school friends resorted to secondhand eye shadow instruction from the pages of Teen magazine, I learned by watching my mom transform the face of a corpse with her skilled makeup application. My mother’s gentle and methodical lipstick application entranced me. Back and forth. Slowly outlining the cupid’s bow of a mouth. Delicately tracing of the arch in a feathery eyebrow. Until, wondrously, the corpse’s vacant mask appeared serenely lifelike.

With her artistry complete, no one could spot the thin line of super glue keeping the embalmed lips from springing open, or the plastic eye caps that gave the appearance of eyeballs peacefully resting in sockets.

As I grew older, I pondered their last moments before this transition. What was the final word they spoke? Who received their last hug? What were they thinking when they realized their mortal roller-coaster ride was coming to a full and complete stop?

Appearances are everything. Even in death. Stand around any funeral home and you’ll hear comments like:

“That spring palette is the wrong tone for Edna’s winter skin.”

“Did they use hypoallergenic cosmetics for Gladys?”

As the grieving patrons milled around, I’d position myself behind the stairwell and peer between the railings, searching for the Mystery Guest. There was always one. They’d stand away from the crowd to avoid the family greeting line. You’d never see their signature in the guest book. Instead, they’d always keep a respectful distance. It was these people that spurred my imagination. I’d analyze their body language and expressions to compose a tortuous story.

One Mystery Lady arrived wearing a conservative pencil skirt and wool blazer. Her brunette hair, aged with silvery streaks, was pulled into an elegant bun. She removed her sunglasses and stepped to the casket, heels silent on the carpeted floor. Her eyes flanked by gentle wrinkles, she stared at the corpse’s strong, masculine hands.

Maybe they worked together in a deli shop one summer in college. The first time she shook his warm hand, she was hooked. His touch was medicinal and melty. Watching him carve a turkey became a daily religious experience, but it was his earnest eyes that kept her at that wretchedly boring job.

Mystery Lady leaned closer, and a delicate tear dripped down her powdered cheek.

Perhaps instead, he was her enthusiastic grade-school piano teacher. As a foster child, she often felt isolated and alone. He inspired her to express her pent-up emotions through the ivory keys. He gave the most encompassing hugs. His arms felt like they encircled her twice over. Eventually, she went off to college and signed on with Tokyo Symphonic Orchestra decades later. She never did get a chance to thank him.

Conceivably, he was her neighbor. They’d spend afternoons climbing oak trees and evenings catching fireflies. They’d cut tags off of stuffed animals to turn them “real” and talk to ghosts stuck in the abandoned house down the street. Hard to believe he only lived next door for a few months. His influence was what sparked her career in childhood psychology.

We fill our lives with “what ifs” and missed opportunities. A multitude of alternative lives, unexplored.

Mystery Lady buttoned up her secret and walked out the funeral parlor doors. Once all sadness had evaporated from the air, and the coffin was on its way below the dirt, Grandpa’s funeral home would be a stoically empty space again.

Years later, at my mother’s urging, I wandered the halls of my grandpa’s home, on a mission for spare items to furnish my vacant college apartment. Tucked in a box, I discovered the Mystery Lady’s forgotten butter-yellow lace handkerchief. I was tempted to keep it, but a recent viewing of Amityville Horror convinced me otherwise. I left the Mystery Lady’s memories intact.

I continued my scavenger hunt and sniffed each upholstered ottoman and chair. After baking in years of formaldehyde air, nothing would pass the nostrils of my roommates without serious disdain. With the stale scent of perfumed chemicals in my nostrils, I only dared to accept a stainless steel whisk. It was the most neutral item I could find.

Stainless steel doesn’t keep memories. It’s easily cleansed of smell and fingerprints, and makes an unflappable witness in our human events. This explains why its cold surface gleams in hospitals and embalming rooms, and is evidence of how similar doctors and morticians can be as they deal with the full spectrum of death—from peaceful to senseless. Both professions serve communities and demand long hours, mounds of paperwork, and copious late-night phone calls.

Somewhere in either career, you’ll inevitably find a person eating a bologna sandwich over a dead body.

Lara Salyer is a family physician and author of Right Brain Rescue: One physician’s journey from burnout to bliss reveals the creative muse in all of us. 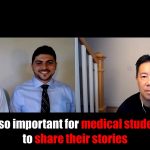 More by Lara Salyer, DO