That first day of mid-March in the call center that was later to become the headquarters of our student lead COVID-19 hotline, the disorganization and confusion were almost palpable. I remember the other fourth-year student at the time, Eda, trying to manage the newly arriving group of student volunteers while simultaneously answering a phone line that was ringing off the hook. I remember the blur of motion as three nurses tried to do their normal jobs while trying to manage a hotline number that appeared overnight without warning. Voices were talking over each other, phone lines accidentally disconnected, and rings going unanswered. Dozens of volunteer nurses and students stood confusedly scattered throughout the hallway, trying to keep six feet away from everyone else. All the while, hundreds of worried Chicagoans were calling trying to get answers about their health and the health of their loved ones now that the pandemic had officially hit our city and appeared to be here to stay.

As a medical student, I had been taught about codes, running a team response to resuscitate a patient who was acutely ill, or once their heart had stopped. I learned about how codes could easily devolve into disordered chaos, and how every code needed a team leader, clear roles, hierarchy, and good communication. I learned that codes could occur at any time, on any floor, and that many of the hospitals with the best track record in successful resuscitation had dedicated response teams whose purpose was to respond to codes, as and when they appeared. As I watched a room of educated professionals devolve into a running, yelling, chaotic mix, I was reminded of those same lectures. I wondered then where the response team was – where was the team leader, what were the set roles. It was clear in the confusion that no one knew who was supposed to be in charge of what was soon to be a brand-new call center that would crop up within 24 hours. There simply wasn’t any individual or team with the job flexibility or responsibility to take on a brand-new call center as the crisis demanded. Instead, I and a group of my fellow medical students, by virtue of being in the right place at the right time, were able to step up, putting together a hotline and ambulatory testing triage center that turned into a major component of our hospital systems’ early COVID-19 response. And though I learned a great deal and am incredibly proud of the work we did, I also can’t help but pause when thinking of a system that left medical student self-starters as the solution to a major component of a rapid and coordinated pandemic response.

This problem was not unique to our hospital system. Hospitals, by their very nature, are places of rigid hierarchies, where any major change in policy or systems not only has to be approved by the manager, but frequently by multiple committees, the CMO, hospital chairs, and even the heads of a hospital system. All hospital employees and contractors are anchored into specific roles, jobs with very specific descriptions of responsibilities, and a nested decision structure built to manage hundreds of employees while cutting down on staff to minimize costs. As a result, hospital systems are unwieldy institutions with almost no flexibility. When hospitals have disaster response teams, they generally have full time administrative or clinical roles. System-wide surge capacity planning may be present, but often fails to build in flexible roles for the responders in order to execute on those plans for seen and unforeseen clinical and non-clinical needs. Without any staff with flexible roles and responsibilities, it is no surprise that hospitals will fail to respond swiftly to new challenges. Thus, at our hospital, and like so many others around the country, the rapid response call to COVID-19 was neither rapid nor a cohesive, coordinated response. And though this was deeply problematic in terms of the pandemic response itself, it is even more problematic due to the very role hospitals play in our society.

Hospitals, by their very nature, are institutions that need to carry the brunt of any number of unpredictable disasters; they are at the receiving end of any major force in our society. In these past months alone, our country has experienced a pandemic, a near economic collapse, fires and floods of unprecedented severity, and a rupture in our social fabric leading to calls for racial and social justice throughout the country. Each major event has created massive change for hospital systems, from an increased number of critical patients, the loss of elective surgery funding, the decreased number of patients with insurance coverage seeking care, to hundreds of patients seeking care for chemical injuries at protests or smoke and inhalation injuries at home. Hospitals, by providing healthcare to all Americans no matter their race, ethnicity, age, gender identity, immigration, geographic location, or insurance status, have been and will continue to be on the receiving end of every societal upheaval. And yet, despite our role to care for those whose health will always be affected by change, we have failed to create a system with the flexibility to meet each new crisis, each new need as and when they occur. Instead, we tolerate a system where the majority of hospitals and clinics show delayed slow responses, with inadequate organization. We have a system where hospitals at the moment try to identify which staff can be spared where, who can be moved to a different brand-new position, and who can add responsibilities to an already overflowing work schedule. Instead, hospitals should have teams that are ready to be called on and moved around as they are needed, teams whose jobs are to not just prepare the hospital for change, but respond to it.

Though our student team was able to respond effectively, students cannot and should not be the solution. If this year has taught us anything, it’s that our hospitals are falling behind, failing to meet the changing times we are in. We are witnessing a chaotic response to a series of code blues. We are leaving the response to a disjointed set of spontaneously forming teams, rather than setting up a flexible response arm in every hospital around the country – preparing to respond to every new wave, every disaster before it even arrives. Our response to date has been a disjointed, chaotic fibrillation, where different parts of the hospital, community, state, and country acted alone without communicating with the whole. My hope is that we take 2020 for what it is; the shock we all need to find a more appropriate system – one with built-in flexibility, one that can take change in its stride.

Medical students are benched during the pandemic [PODCAST] 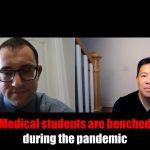 5 situations when you should get a second opinion

A young doctor’s thoughts on our disaster response system, and why we need to change it
1 comments