Most health care providers are aware of the FIGS scrubs advertisement that depicted a female physician with a DO badge holding a Medical Terminology for Dummies book upside down.  In one fell swoop, FIGS enraged the entire medical community causing backlash towards their company.  This ad mocking female osteopathic physicians sparked outrage.  Many in health care have vowed not to purchase FIGS, prompting the #boycottFIGS response posted as a result of their actions.

Personally, I felt attacked as a female osteopathic physician. Ever since I was a little girl, it was my dream to become a doctor. I chose to become a DO because the philosophy of holistically treating patients resounded with me.

Women in health care have to overcome adversity based on our gender. Not only was this ad insulting by depicting a woman in medicine as ditzy, this was also a slap in the face to all DOs who have spent years of our lives in medical school, residency, and fellowship training to be called less than out MD colleagues.  Words can’t express how appalling it is to have your hard work be belittled after all the blood, sweat, and tears shed, especially in light of COVID-19.

To add insult to injury was the insincere apology from FIGS.  “A lot of you guys have pointed out an insensitive video we had on our site – we are incredibly sorry for any hurt this has caused you, especially our female DOs (who are amazing!) FIGS is a female-founded company whose only mission is to make you guys feel awesome.”

FIGS did issue a formal apology after their last attempt failed to appease the medical community. However, their explanation of how the advertisement was approved was disappointing at best.  FIGS stated,” Our mission at FIGS has always been to empower medical professionals.  Beyond a lapse in judgment, the bottom line is – our processes at FIGS failed. We are fixing that now. It will never happen again.” The biggest disappointment is that it happened. It never should have happened in the first place.

FIGS goes on in their apology to say, “We will be hiring advisors from the health care community with a variety of skill sets and specialties to ensure FIGS is responsibly and respectfully bringing these professions to life.” It shouldn’t take a panel of health care professionals for a company that caters to those in the medical field to realize if an ad is disrespectful and sexist.

The company did donate $100,000 to the American Osteopathic Association (AOA) to provide education about the osteopathic field. Although this gesture seemed forced, $100,000 is a drop in the bucket for a company that makes $100 million annually.  FIGS is pretentious to think they could throw money at the problem and make it go away.  FIGS did state they will mandate their employees to learn about the responsibilities and roles of medical professionals. One would hope that a company that profits from selling scrubs and lab coats would be aware of their target audience.

There was some good that came out of the FIGS faux pas. The medical community united and rallied against this blatant misrepresentation and spoke out against sexism. Hopefully, FIGS will learn from this mistake and that every member of the health care team should be valued and respected. The medical community is going above and beyond our expected duties and putting our lives on the line daily.  We are all fighting on the front lines against this pandemic.  I am proud to say that as a female osteopathic physician, I have a supportive medical community by my side with or without FIGS scrubs.  I want to thank all the RNs, PAs, NPs, MDs, and health care workers speaking up against this portrayal of DOs.

A physician experiences unprofessional behavior. What happened next? [PODCAST] 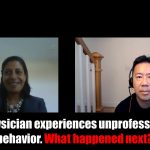 Asian-Americans for cross-racial solidarity in medicine

A DO’s take on the FIGS faux pas
3 comments