The patient arrived in cardiac arrest. He had been brought to our emergency department in the middle of the night. Although he had a significant cardiac history, including bypass surgery, he was only in his late 40s. His transport from his house to our department had been less than 10 minutes, and the pre-hospital team had done an excellent job of intubating this patient and establishing an IV to begin resuscitation efforts.

His wife was with him. Less than 15 short minutes before their arrival, her life had been altered forever when her husband had woken her from her deep sleep to complain that he had intense chest pain. Mere seconds later, she witnessed him pass out and become completely unresponsive.

On arrival at our ER, we found this patient to be in pulseless ventricular tachycardia — a malignant, life-threatening electrical rhythm of the heart. Following ACLS protocol, we hurriedly shocked this patient several times, performed CPR, and administered multiple doses of medications to combat this rhythm.

After several very intense minutes, we were briefly able to regain a rhythm and a pulse on this patient. Despite this, he remained unresponsive, and his blood pressure was minimal. We continued our efforts to stabilize this patient as we awaited cardiology’s arrival.

Despite our aggressive medications and interventions, this patient returned to a pulseless ventricular tachycardia. His heart was damaged and seemed unsalvageable. More shocks followed. More medications were given. And, once again, we were able to break the bad rhythm. Like before, unfortunately, the malignant rhythms returned in just seconds.

Cardiology arrived, and together we continued to fight for this man’s life. His rhythms were very fragile, and eventually, they transitioned from pulseless ventricular tachycardia into asystole (a flat-line, so to speak). Asystole is bad, very bad, and is rarely survivable.

We were running out of options. If we were going to be able to intervene any further, we needed this patient to regain a stable rhythm. Getting him into a sinus rhythm had been hard enough initially, but now it was becoming hopeless. His heart, from previous infarctions and damage, was resistant and stubborn to our best efforts.

As the cardiologist and our ER team continued with resuscitation efforts, I went to the family room to speak to this patient’s wife. She was obviously upset, and I explained her husband’s dire situation. Our reality was that time was not our friend. The longer he continued in asystole and ventricular tachycardia, the less chance of his survival. She understood my words. “I always knew it would end this way,” she said, her honest words reflecting her inherent sense of the situation.

Her husband’s heart was damaged. Her heart was breaking.

I invited her back to be with her husband, to witness the momentous efforts we were all giving him. She wholeheartedly agreed, embracing my invitation. Although I could describe to her our efforts, I wanted her to see for herself the incredible attempts of resuscitation being provided.

A picture is worth a thousand words, as they say.

Returning to the oversized room, filled with people and shiny medical equipment, I looked at the resuscitation through her eyes. Three nurses, each scurrying with a focused determination, documenting our efforts and pushing IV medications. Two techs, one actively performing CPR while the other was readjusting the patient’s blood pressure cuff. Two respiratory therapists, standing at the head of the bed, one using an oxygenated bag to ventilate this patient via his airway tube while the other prepared a mechanical ventilator, ready to be used in the event of our resuscitation succeeding. The cardiologist, standing at the patient’s open side, dictating the next course of medications while I was away. The pharmacist, standing with the crash cart outside of the patient’s door, repeatedly handing in the next dose of ordered medication. The case manager. My resident physician. The patient’s wife. Me.

And the patient. Lying on the hospital cot. Unresponsive. In asystole. Again.

I guided her to his side, where she grabbed his hand and whispered in his ear.

Despite this many people in our big resuscitation room, the air seemed open, the frantic energy palpable. The team moved purposefully and in sync. Their caring, their vigor, their sadness, their intensity was obvious, witnessed by this patient’s wife.

Unfortunately, our patient’s heart became refractory to all of our best efforts, and our medications no longer had any effect. I had the tech hold CPR, and we confirmed asystole on several cardiac monitor leads. The portable ultrasound was brought to this patient’s bedside. It confirmed our worst fears, that his heart had no squeeze, no motion, no life. His wife saw the stillness of his heart on our black-and-white screen.

Forty or so minutes had passed since the patient arrived and, as I had explained to the wife in the family room, time was not our friend. We had no other options of treatment to save this patient, her husband.

It was a powerful moment.

With no objections, we ceased resuscitation efforts. Time of death was proclaimed. I thanked my team. I crossed myself. I conveyed my sympathies to the wife. The crowd of people slowly withdrew from the room. The lights were dimmed. The patient was covered in nice, clean blankets. The patient’s wife was brought a chair, along the bedside, where she sat, continuing to hold her husband’s lifeless hand within her trembling own. A box of Kleenex somehow found her lap.

The family doctor was called. The coroner was notified. I dictated my note.

All methodical parts of my job. When I was done dictating, I went back into the room. As I expected, his wife was still there. I wanted to sit with her in silence for a few moments.

“I’m so sorry for your loss,” I whispered.

She nodded. “I know you tried your best.” She paused, taking a deep breath, before continuing. “Thank you for letting me be with him in the end. Everybody fought so hard. I just…needed to be here.”

After several minutes, I walked back out of the room, thinking about how much medicine has changed since I first finished residency in Syracuse. Not only with newer drugs and newer procedures, but it has changed with newer thinking. A few short years prior to this patient’s arrest, it would have been unthinkable to invite a family member to bear witness to resuscitation efforts. Now, though, I try to offer this option to a family member if the situation allows. Much literature has evolved, strongly in favor of presenting this as an option. Clearly, this wife was empowered, her view clarified, by choosing to be with her husband at the end. It was necessary for her closure to witness our heroic attempts.

I am glad she had this opportunity.

What would you do in a similar situation? Would you go to the bedside of your loved one and witness firsthand the resuscitation efforts? Or just wait patiently in the family room for updates?

Me? I’m not so sure what choice I would make. The thought of this choice carries much heaviness to it. I probably would. I have to wonder if my indecision or hesitation is, in part, from doing this job for a living or just my inherent spiritual make-up. Obviously, witnessing such a loss and life-altering event may not be for everyone. For those that are offered this option and choose to go to their loved one’s bedside, I hope it is healing and comforting.

Let’s just hope that we never have to make this decision.

Patients vs. customers during COVID

Genetic testing: Could there be unintended consequences? [PODCAST] 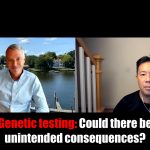