The number of women going into medical school has risen to top the number of men admitted. Harvard has its first Black woman student body president. I am seeing more and more women sharing their experiences and uplifting other women in my physician coaching groups.

“It’s like, we’re not going to take this anymore,” said Rep. Ocasio-Cortez, referring to sexist comments made by a colleague in Congress. You have to admire her courage, no matter your political leanings. And that’s my point. It takes great courage to stand up for yourself and not without consequence. Rep. Ocasio-Cortez risks re-election. If a student or resident speaks up about sexism or bias, she may be perceived as a threat or unstable and not get the recommendation letter, the grade, the position, the title, the residency, the certification, the job, and ultimately the career she wanted. The problem is that the courageous calling-out of blatant sexism is the exception.

When my most recent story about a faculty dermatologist refusing to call me by my hyphenated last name was published, I received some pushback. Comments such as, “You’re arrogant,” “You’re making a big deal about nothing,” “There are so many more important issues in medicine,” were made.

The other comments that I found interesting were the defense of this older male dermatology faculty member. “He is just of another generation,” “He’s just one guy,” “You interrupted his class with your argument.”

There was a great deal of positive support as well, but I want to point out that these negative comments prove my point! It is a demonstration of just more of the same sexism. More of the same is not going to make a shift in medical culture. Micro-aggressions (and blatant aggressions) are real, and they need to be called out if we are to transform this behavior, language, and culture. The system is patriarchal, and if a woman steps out of line by talking back, peers and professors judge them. It is also a hierarchical system, and no matter your gender, the system encourages conformity and silence of those not in power. If we truly want to shift the gender, race, and LGBTQU conversations in medicine, we have to be willing to be nonconformists and uncomfortable. I am sure it was not comfortable for Rep. Ocasio-Cortez. I know it was not comfortable when I spoke up. We must get comfortable with the uncomfortable.

Culture change in medicine requires that we get comfortable with being uncomfortable.

These are not easy conversations. One of the most common questions I get is, “How do I stand up for myself?” At the time of my story, I just stood up without conscious thought. Looking back, I realize I entered school and training with healthy expectations of respect. Imagine my surprise when I found that it was not part of the rules. It has taken looking back with self-reflection and formal training in communication to know I’d stand up to my dermatology attending again; that it wasn’t arrogance, and it did matter. “It’s like we’re not going to take this anymore.” They don’t teach you this in medical school.

Here are my ten suggestions for powerful speaking, including standing up for oneself:

1. Do put yourself in their shoes, so you can reply in a compassionate way and with presence. Be really there. Don’t be in your head somewhere else. This is probably not the first thing that comes to mind, but it is the most profound.

2. Do your best to really connect with the person. Look them in the eyes and – again, be present. Don’t look anywhere else.

3. Since one’s voice and chosen words are the most powerful tools, do think carefully before speaking, and it is more powerful when your voice reflects confidence. Don’t mumble.

4. Do stop apologizing – unless there is something to apologize for. Do have the majority of your speaking be declarative sentences. “I am” or “we do” or “it is.” Don’t speak as if you are asking a question where there is none, or using fuzzy “someday, maybe” language like “I hope …”, “I try …”).

5. Do pay attention to your physical stance. Notice your posture. Don’t stand there with slumped shoulders and speaking with your chin on your chest. This does not inspire confidence.

6. As part of the thinking you do before you speak, do make sure that you pick your time and place as appropriate.

7. If someone has made a disparaging remark and you were not able to speak to it at that time, do make sure you find the place and time to say what you need to say. (I told you we have to be comfortable with the uncomfortable.) Don’t stuff it. If you don’t say anything, how are they to know? Remember, unstated/unexpressed resentments create distance between you and the other person and kill any kind of possibility.

8. Do train others how to treat you, both in actions and in words. Perhaps you have a preference for certain words or names. Make them known in a non-threatening way. Train others by your right words, actions, and promises kept to them. Be a person of integrity. Be your word, or at least be in communication if you can’t keep your word. Don’t be a flake.

9. Do educate yourself about microaggressions. If you wonder if a phrase, word, or behavior is offensive, it probably is.

10. Do practice, or even do a mock conversation with a friend, mentor, or coach. One doesn’t learn to do neurosurgery in a day – communication is that kind of skill and has to be practiced.

These are skills that I wish everyone had been taught in medical school and training and are applicable in many situations, including home. Please, speak up, on behalf of your colleagues and our profession. It is the only way to culture change. Do speak up.

Is now the time for single payer? [PODCAST] 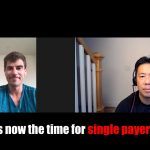 Calling out sexism: 10 tips for speaking out
2 comments