“How long have you been married?”

The question came from a young woman kneeling down by the elevator in the hotel where my wife and I were staying while in Seattle. We were there to celebrate our 40th wedding anniversary with an Alaskan cruise. I hadn’t even noticed her as my wife and I were busy talking about the day. She appeared to be in her twenties. Her appearance was that of a person seeking attention (or masking something deeper?) – too much makeup and very provocative clothing. She held a hotel key in her left hand. She was trying almost frantically to shove a pair of jeans and a T-shirt into a small bag. Her purpose for the evening seemed apparent. It was her unsolicited question, and the words that followed that surprised my wife and me and came to haunt us.

I answered, “We have been married 40 years and, in fact, are celebrating our anniversary.” As she continued stuffing the clothes into the bag, she looked up and said, “Just be thankful you aren’t a millennial.” We were both stunned by this comment and did not know what to say. She then said, “My parents were married for 12 years. Stay married.” She returned to packing her bag without saying another word. The elevator door opened, and my wife and I got in, but she stayed kneeling, intent on finishing the packing. I had the distinct impression she was purposefully delaying an inevitable event.

In the elevator, my wife and I looked at each other, trying to understand what just happened. We considered going back to find her. There had been such sadness in her voice and in her face. Was she involved in human trafficking? Was she a runaway trying to survive the best she could? What was the “story” behind those words? Even now, two weeks later, we think about her, and the words she said, words that were more like that of a sad little girl instead of a young woman. We remain haunted by that brief encounter. We should have done something, yet we did not. Why? We both have compassion and concern for others, yet we did nothing. What will happen to her? We will never know. We only know we missed an opportunity to help someone who cried out to us for help.

I wonder how many times in the 30 years I practiced medicine I missed the subtle cries for help from my own patients because I was too busy to “hear” them. We live in a hurting world. It is easy to not see the hurt, the pain, and the hopelessness around us because of the busyness of our own lives or maybe even our own personal struggles and pain. My hope is that each of us will hear that cry for help, however subtle it may be, and do something about it. We are in a unique position to truly make a difference in the lives of people in more ways than just medically. We only need to be willing to listen for that cry. Thank you for living a life that makes a difference every day.

I never expected death to be so blunt

We can't expect large medical centers to absorb every case 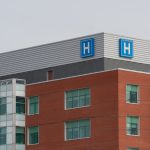 A silent cry from the woman in the elevator
1 comments