“It’s not my fault that you chose to have children.”

Years after leaving my job, I still hear my boss’s words in my head.  He did not want to get married and or have children. He made that clear during my interview. He was also clear that he did not want anyone to perceive that I got special treatment for having a family.  When I left, I did not sue. I wrote a brief note to human resources indicating that I did not feel supported in terms of career development, and I resigned.  I did not elaborate on what it means to be a female physician at my institution, with few of us ever making it to the upper echelons of leadership. I also did not detail the many cringe-worthy moments in rooms where masculinity was celebrated and toasted, and women were ogled or called crazy.  For years my boss commented on my physique, my fashion choices, my intensity, and my big personality. He asked me to tone it down and to lie low in meetings.  And he complimented me for hitting the right tone when I was particularly conciliatory.

For a time, I was widely seen as his work wife, a complicated position to be in with someone who decried the value of such a partnership.  I helped him nurse wounds when the latest girlfriend left him.  We would all awkwardly socialize with him during these breakups, watching him take women home at the end of the evening, fueled by alcohol excess.  When the practice grew, he pulled me into his office for advice on how to delegate his responsibilities.  He considered designating a co-leader, someone to relieve the load. He let it hang out there that he might want me to serve as his second in command. He chose a group of leaders instead, and I was grateful to be part of this group. I loved program development and brainstorming ideas.

But those meetings, mostly male, became increasingly uncomfortable. On one occasion, we were discussing our office Christmas party, and my boss suggested a key bowl – the practice of wife-swapping, harkening back to the 1970s.  The guys eyed me and each other uncomfortably, especially when he expressed shock that they didn’t want to sleep with his girlfriend. The men in that room regularly traveled to Vegas with him and ultimately served as groomsmen at his wedding. He had decided to get married, after all. I was the only female physician from our group at the flashy destination affair. The ceremony and surrounding events were designed to highlight his sexual desire for and prowess with his now-wife. I was embarrassed for his parents and saddened by the antiquated construct that was playing out in front of me.

When I resigned from my position, the Big Boss, as I called him –  i.e., the boss of my boss – called me to express his sadness that I was leaving. He also called to scold me for the brief note to human resources. I should have left “nicely,” he said.  This is the same man that chided me for looking too serious and not being friendly enough the first time that we met.  I recall meeting him while engaged in a deep dive into the chart of a new complex patient.  From that point forward, whenever we met, he would put his arm around me tell whoever was listening: “She wouldn’t look at me the first time we met. Now at least she smiles at me.” He did try to help my relationship with my boss when things got bumpy.  He got us through one particularly harrowing period.  At that time, my boss had had several complaints leveled against him, so they were taken seriously.  He was counseled in strong terms.  He vowed to speak more respectfully to me and to work on my career development. By that time, he had taken a tireless young man as his second in command.

Our relationship was so long complex and fluid that I believe I missed the undertones signaling that my growth would be limited in my boss’s charge.  I also colluded in allowing myself to be bought by the shiny promises dangled ahead and by not speaking up when other women were derided and discarded time after time.  Perhaps I could enact change from the inside by gaining respect and visibility if only I held back just enough?

Stories like mine abound in the world of female physicians. We also make less money, hold fewer leadership and academic positions, and  regularly endure the following:

The most obvious solution to the problem is to work towards more female representation in leadership positions in medicine and to make it safer to speak out.  The backlash from reporting sexual harassment or discrimination is significant. Women fear losing their jobs or hampering their career prospects.  Additionally, the potential for retaliation and being put through the wringer by defensive and bruised bosses or colleagues is very real. This kind of battle can grind life to a halt. Who can financially or emotionally endure such a trial? Despite gathering many such stories from female doctors, and others, at my institution, as well as encouragement by other men in leadership to share my story, I chose not to take that path. I, too, decided just to move on and pursue a work environment that showed me greater respect and value. I did this because of the toll that a battle might take on my family – the family that I chose to have while daring to be a female physician at the same time.

Our patients matter, but at what cost to our families? 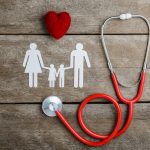 A physician unmutes herself after receiving an email