Over the past few months, my 6-year-old daughter and 3-year-old son have been confined almost entirely to our house and backyard to shelter them from the coronavirus pandemic.  They know that “the virus” is dangerous and invisible.  However, like superheroes facing adversity, they found their own escape from the confines of their world to their imaginary world of superheroes.  During the day, my son insists on wearing a frayed and tattered Superman cape and one of many Superman T-shirts nearly constantly.  He asked for a shield and wizard staff for his birthday, which he anticipates using as protection from the virus.  Most nights, we watch a DC Comics or a Marvel movie, which undoubtedly has spawned regular dreams in which my daughter is able to fly.  When we do venture out of the house for the rare socially distanced excursion, they choose their own homemade facemasks fashioned from a variety of materials ranging from old NBA jerseys to superhero prints.  As they tie their masks on like a superhero transforming from an average citizen to their ever powerful alter ego, I can see them both fearful of the uncertainty of the virus and, at the same time, infused with bravery.

This year, most of us were asked to shelter and lockdown to help smolder the spread of this dangerous virus.  This has arguably been physically, emotionally, socially, and mentally exhausting.  Staying home has required us to limit our physical interactions, modify or eliminate our work, become stay-at-home parents and teachers as well as take on many other roles.  Leaving home without required protection during these times means entering a battlefield where the enemy is invisible.  Wearing a facemask provides some degree of confidence that we can evade the enemy, complete our mission, and return home.

It is proposed that we empathize with superheroes because they begin as an average, young man, or woman, but bravely and successfully face adversity for the better good.  Regardless of age or purpose, dressing up allows us to hide our flaws, transform our personality, and imagine that we have supernatural powers or abilities.  Those who participate in cosplay, an abbreviated term for costume play, report that being in costume reduces the impact of their introverted nature and allows them to feel braver and less inhibited.  Every year on Halloween, we transform ourselves into fictional characters with appearances, abilities, and superpowers that are not only imaginary but also are temporary.  Upon removing the costume, we are transformed back into our average everyday selves just as our favorite superheroes are.

Masks have been used to protect us from infection since the plague when doctors wore Carnival-like masks as they cared for the sick.  At that time, it was believed that infection was transmitted by unidentified invisible substances in foul-smelling air, but bacteria and viruses had not yet been discovered.  To counter the effects of breathing contaminated air, the masks were often stuffed with fragrant materials such as flowers.  Centuries later, Carl Flugge proved that respiratory droplets carry bacteria.  In 1897, his colleague Johann von Mikulicz Radecki, inspired by Carl Flugge’s research, created the first mask out of gauze.  During the 1918 influenza pandemic, a mask resembling the current surgical mask had been developed and was soon widely utilized in operating rooms.  At the same time, masks made of gauze and other materials made their way into the general public and were often modified to be either fashionable or functional such as creating a hole through which to smoke cigarettes.  These surgical masks have since became a cultural symbol in health care, representing the physician, specifically the surgeon.  However, with the resurgence of the coronavirus pandemic this year, the mask has represented fear, protection, political stance, and has even again become a fashion statement.  The City of New York published a “Safer Sex and COVID-19” guide to sexual activity during the pandemic.  It is suggested that certain sexual behaviors and positions are considered safer than others, and masks become the new sidekick to condoms in the protection against infection.

Children are being encouraged to take on the superhero persona and help protect others.  They do this in true average-person-as-the-superhero style by wearing a facemask alone, without any superhero powers or words.  Just as wearing a facemask in public has been the norm for years in many Asian countries, it may become the norm worldwide.  For this to happen, we need buy-in by the younger generations who are less likely to wear a mask in public but are equally likely to unknowingly spread infection.  In this group, the ability to make a fashion statement may motivate them to give up their laissez-faire view of their personal risk of harm in favor of the ethically favorable and trendy decision to protect others.

We wonder what the world will look like in a year.  Will the mask become the next accessory to express ourselves?  Will sports fans wear masks made of college jerseys? Will the Olympic Games be a sea of masks representing home countries?  If masks become a regular part of our lives, will our ability to recognize and interpret facial expressions change?  There are many unknowns that only time will tell.  In the meantime, we hope our family and friends will take a lesson from our children to put on a facemask.  We just might find our own inner child and a superhero within.

Why physicians need to diversify their incomes [PODCAST] 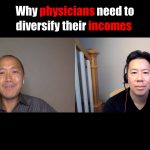