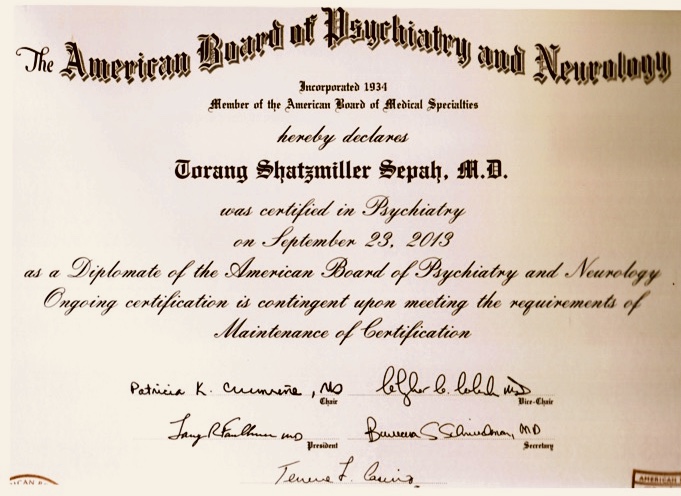 Let me start by saying that I am a diplomate (i.e., “board-certified”) by the American Board of Psychiatry and Neurology. I was completely in agreement that to display competence in my specialty after four years of residency, I should pass the oral and written exams required by the ABPN, further to prove I have maintained my skills, I have always found it reasonable that I will be administered the exam every ten years.  I was willing to pay the thousands of dollars required for the initial exam and the expected fee for the ten-year exam. That is par for the course in medicine: If there is one thing we are used to, it is standardization and expensive exams.

Here are the reasons why I now question the premise of “board certification,” in particular given its pairing with the arduous, confusing, and expensive program called MOC or the maintenance of certification program. For one, there is a select group — lifetime members — who are magically bestowed with the ability to display competence in a specialty without having ever taken an exam, and they can sustain their skills just as magically without having to participate in MOC or re-take the exam every ten years as the rest of us do.  It seems like an institution that promotes “the heart of board certification is an ongoing assessment process,” is undermining its own values by giving a whole a group a pass on re-assessment.

Fundamentally, it is unethical as it promotes inequity among physicians. One group must now carry a greater burden of administrative tasks, which take time and cost, and we are also charged annually for MOC. The lifetime members get to save time and money but still have the same end result: board certification.   How is that justifiable? Did they receive the Nobel prize? Publish over 100 articles? The standard should surely be extremely high, given the mission of the American Board of Medical Specialties (ABMS). Otherwise, the whole institution’s integrity is compromised by this alone.

Beyond this glaring inconsistency, maintaining certification is no longer about showing competence via an exam every ten years.  Not at all. Now, I must pay an annual fee of around $500 to maintain the certification that I already earned fair and square.  If I don’t pay this fee, my status on the ABPNs website turns from “participating in MOC” to “not participating in MOC.”  Really? If I don’t pay the arbitrary $500, I’m now not staying up to date? Says who? I earned my certification and paid for that exam already. There’s only one way to put this; it feels like a shakedown. I have to pay it even though I already earned that certification.

Now, one could argue, what’s $500 a year to a physician? Well, it adds up to $5,000 in ten years, at which time I’ll shell out another several grand to take the recertification exam.  Contrary to popular belief, physicians aren’t exactly rolling in the dough. In fact, 8 out of 10 physicians under 40 carry over $150,000 in medical school debt.  It all adds up: the medical license fee, the DEA fee, the specialty association fee.  Is this extra $5,000 really necessary, and if so, what is it for?

Here’s what it is not being used for, to protect what our board certification stands for.

My board certification in psychiatry doesn’t mean much these days because NPs and PAs are also board certified in psychiatry without attending a medical school, completing an ACGME residency program, passing the three-part oral exam in order to become eligible for the written exam in psychiatry, and of course not participating in MOC or taking our rigorous written exam every ten years.

To make sure that the world knows they are board-certified, they often embroider it on their white coats. And now, in 24 states, they can practice medicine independently with board certification in a specialty like psychiatry.

If the ABMS wants us to value what board certification means, and pay a premium for it without time and pocketbooks, I would recommend that they first show to us why the term has significance in the new world of ‘providers’ who are all seemingly equal in their long white coats and now board certified.

All of the above is important, but not as much as physician lives, which are at risk every day. We lose enough physicians to suicide every year, so that over one million patient contacts are lost. We are twice as likely to take our lives as the general public. While there are no direct studies linking physician suicide to our consistently escalating burnout rate, now at 50 percent, we can safely conclude that we are in crisis.

There some characteristics about physicians that we already know: We are self-starters. We rarely need prodding. We don’t like to be micro-managed. Most of us won’t be where we are if we didn’t have these qualities. MOC seems to miss these key characteristics that are our strengths. Instead, the ABMS seems to be contributing to two of the key identified etiologies of our burnout syndrome: added administrative burdens and lack of autonomy.

Let’s consider some facts: the average workweek for physicians (after residency) is 55 hours and 25 percent work more than 60 hours.  We are literally drowning in charting. For every one hour of face to face to time with a patient, a physician spends two hours on the EMR. Many of us are charting during “pajama time” after our kids go to sleep just to catch up.

I sincerely ask the ABMS if they have considered how their added MOC costs and micro-managing burdens add to the burden that frontline physicians already face? Do you know that paying for self-assessment tests is of low utility when most of us are evaluated constantly through patient satisfaction scores, peer review of charts, and not to mention myriad online review platforms? If I have ten minutes to spend with my kids, I can promise you that I will not spend it doing it a (paid) self-assessment.

As someone who genuinely believes in maintaining the highest standards in my profession and specialty, I hope that the ABMS will be able to realize that in order to protect the integrity of medicine, they must first protect those who practice medicine.

You’re outraged by police brutality and racism. OK, now what?

A subtle change in the parents at a pediatric clinic

How MOC is contributing to the demise of physicians
23 comments