In the living room of the house where I grew up hangs a framed copy of a 17th-century map of Pennsylvania. The land is divided into tiny plots, each painstakingly labeled with a family name.

When I was little, I’d stand in front of the map and search for the little squares labeled “Sharples” — the original version of my last name. I’d imagine my distant ancestors, John and Jane Sharples and their seven children, dressed in bonnets and breeches as they sailed across the Atlantic in 1682. As Quakers, they’d purchased land from William Penn and had fled religious persecution in their home country — England.

To a young girl, their immigration story sounded romantic; but as I grew older, I realized that it wasn’t. Their life in England must have been unbearable for them to be willing to risk losing everything in order to rebuild their lives in a strange wilderness. Indeed, they paid a steep price: One of their children died on the journey. I also had to consider their role as colonizers, living on land that had once belonged to Native Americans. How should I feel about my family’s immigration story?

During two of my summers in medical school, I drove through the fields of rural Maryland, armed with a stethoscope and a tape recorder, interviewing migrant farm workers about their experiences with U.S. medical care. Ostensibly, I was helping to take blood pressures and learning how to do qualitative research; in reality, I was collecting stories.

I spoke with mothers who’d left their infants in Mexico so that they could spend six months a year picking crab meat out of sharp shells for five dollars a pound. Their arms were marked with cuts and rashes from exposure to the shells’ iodine, and the meat they picked was sold to tourists in town for twenty dollars a crab cake.

At one camp, I spoke with a man, a biochemical engineer by training, who’d come here to earn money to help pay for his wife’s treatment for a parasitic brain infection. He spent his days planting trees at a nursery. At another camp, I heard that the field supervisor had shot a worker in the leg during an altercation. The worker had fled to Florida, and no one had reported the assault for fear of drawing the attention of the law.

These stories overwhelmed and awed me. My patients spoke largely without rancor, but I was filled with indignation. Their words buzzed like hornets in my ears.

Perhaps, I thought, if more people knew how brave migrants and immigrants are in the face of so much adversity, they’d respect them more, welcome them, help them.

Hoping to create a bridge between these people and the country they’d come to, I wrote profiles of them, one of which was published in a medical journal. But often, after their stories had filtered through my ears and out through my fingers onto the page, they no longer felt so genuine. I began to wonder, Am I telling their stories for their benefit, or for my own?

When I chose my family-medicine residency program, I wanted to train in the Bronx largely because I knew that many of my patients would be immigrants: More than one-third of people who live in the Bronx were born in another country.

I saw patients from Africa, the Middle East, the Caribbean, Asia and South and Central America. I loved that my role as a health care provider made it easy to ask about immigration stories. After all, people are used to doctors prying into the intimate details of their lives.

In the fall of my first year, I met Mr. Cuevas in the hospital. The admitting diagnosis was pneumonia, although his chief complaint was not “cough” or “shortness of breath” but “blindness.”

A fellow intern who was caring for him told me that I’d be his primary-care doctor after discharge and that I should go to meet him.

“He’s been through a lot,” she said. “You should see his old Mexican ID from when he first came to the U.S. You’d never recognize him.”

I knelt by Mr. Cuevas’s bedside and took his hand, knowing that he couldn’t see my smile. His face was swollen and puffy — a classic steroid-induced “moon face.” His hooded eyes stared askew at the wall.

I explained who I was and added that, since he was undocumented, hospital policy dictated that we could provide him with only two weeks of medications upon discharge.

“I’ll help you get more medication when you come to visit me in the office,” I finished. He nodded and thanked me.

Afterward, I asked my fellow intern how he’d gone blind.

” Years ago, he was diagnosed with asthma and given a course of prednisone,” she told me. “It helped him, and he didn’t know that if he kept taking it, it might cause cataracts. Somehow, he kept getting refills. He took prednisone every day for more than a decade. When he showed up at the hospital this week complaining that he couldn’t see, he was found to have pneumonia and new diabetes, so he got admitted.”

The hospital ophthalmologists said that, without insurance, removing Mr. Cuevas’s cataracts would be too expensive; they referred him to another public hospital. The pneumonia found on his chest X-ray was treated, but he was sent home from the hospital as blind as he’d come in.

Over the many months that followed, I worked with Mr. Cuevas to wean him off of prednisone, to send him to the endocrinologist to manage his prednisone-related hormonal imbalances and to set him up for eye surgery.

Since going blind, he hadn’t been able to work at his construction job, and he didn’t have enough money to pay even the minimal copays on his sliding-scale payment plans. Trying not to go broke, he rationed his medications and doctor appointments.

Moreover, he couldn’t see well enough to get to his appointments alone — and even if he’d been able to see, he was illiterate, so couldn’t have read our directions. He had no family in the U.S., but a kind neighbor shepherded him to his appointments until, finally, his cataracts were removed, and his vision partially restored.

Shortly afterward, I asked Mr. Cuevas, “If you could change something about your life, what would you change?”

“If I hadn’t come here, I wouldn’t have been blind or diabetic,” he said. “But you can’t fight the things that come. Now I have to live with the good and the bad. But if I could go back to live with my family, I would smile and not worry that I didn’t have shoes.”

During my second year of residency, Donald Trump was elected president. Suddenly, asking people about their immigration experiences took on a whole new feeling.

The day after the election, as I rode the subway home from work, one man turned to another who was reading the Koran and screamed, “Go back to where you came from!”

The woman next to me, who was wearing a hijab, turned to me.

“And it’s only the first day,” she said. “Imagine how much worse it can get.”

Over the months that followed, I kept on asking my patients about their immigration experiences while trying to keep from doing or saying anything to worsen their fears.

Nevertheless, some patients would respond to my questions with, “Why do you want to know?” Others voiced worries about cousins or parents or spouses who might be deported.

Our newspapers and TVs were flooded with news of ICE raids and the sights and sounds of small children crying for their lost parents, trapped in detention centers located miles or even states away. Even in relatively liberal New York City, it was becoming more and more dangerous to be an immigrant in America.

When it came time for me to choose a topic for a social medicine project required by my residency program, I knew that I wanted to do something to celebrate the strengths of the immigrants in our community.

I asked Mr. Cuevas and several of my other patients to sit down with me and tell me about their lives in their home countries, their journeys to the U.S. and their experiences while here. I created artwork featuring their words, and photographs of their hands holding something or someone meaningful to them.

These words and photographs are now exhibited in my residency program’s family health center, in the hopes of creating a welcoming atmosphere for current and future immigrants. This time, instead of filtering my patients’ stories through my words, I’ve let them speak for themselves.

Joanna Sharpless is a family physician. This piece was originally published in Pulse — voices from the heart of medicine. 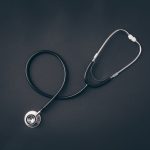 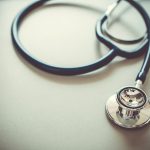