Go to college, go to medical school, start and finish residency and fellowship, get married, settle down and have children …

There is a certain expectation of what a “successful life” would look like for a physician mom. Some may even choose to stop work and become a full-time stay-at-home mom.

Even when my spouse, who works part-time for most of our marriage, took a year off work to be the stay at home parent — all the information from school came to me. Phone calls confirming class times and schedules, changes, issues relating to the kids. Nevermind that dear husband put his contact number as the primary number to call — it automatically defaults to mom (who is normally juggling calls between caring for sick patients at the hospital).

Women have traditionally filled this role: juggling work, family and the children’s schedules. In the past, the expectation is for the woman in the family to take the least demanding job and for dad to be the primary breadwinner. Don’t even worry about mom’s ambitions and dreams.

The one major issue is — despite all the stereotypes among college graduates in United States — 2014 was the first year more women graduated from college than men. By 2016, 33.7 percent of women obtained higher education compared to 33 percent of men. While this is still not a big difference, the number of women who earned a doctoral degree in 2016 outnumbered men by 135 to 100. The number of women enrolled in medical school in 2016 is almost evenly distributed among women (49.8 percent) and men (50.2 percent). Many traditionally male-dominated fields such as urology and neurosurgery have more female residents, and, eventually, attendings.

The tricky part of navigating all of the above career advances and success is that motherhood still runs on somewhat of a stop-clock. Despite advances in medicine and IVF technology, there is still not an ideal time to have children. This is made even more challenging by the lack of formal maternity leave in the United States, as the primary income earner in the family. Many studies have shown the importance of linking good quality of family life to career satisfaction and productivity.

I had three children as a medical attending.

Due to not wanting to take a big financial hit, I creatively carved out three weeks of maternity leave with my first child and to sit for my board examinations. This also meant that I lost out on my first year’s production bonus despite working harder than anyone else the rest of the year. With my second child, whose birth occurred around the time when the economic slump hit my area, and my husband’s job was down to hiring him one day a week at times, we just moved and bought a new house. That meant ten days of maternity leave. With my youngest, I did get my full three weeks by working non-stop prior and after my self-paid maternity leave. That was also when my husband decided to be a stay-at-home-dad to our kids for the time being.

My story is not unique to me. Many primary breadwinner moms either working in jobs without vacation benefits or who have their own private practice without paid maternity leave have done the same or had taken even less time off.

This is not a story about saving money, but it is one of physician mom primary income earners doing what it takes to keep the family financially afloat and secure. Do what you love, plan ahead, get the support you need to do what you need to do. It does get better, and with some checks and balances, you can have it all.

A first-time case in a 35-year medical career 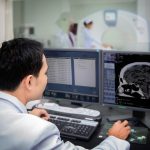