For the most part, the sexism in medicine is not subliminal at all — it’s quite overt. Unless you’re a female physician, you probably are unaware that it’s still an ever-present reality for us. I want to note that there are very good men out there who are trying their best to be advocates for equality in our field even though they cannot fully appreciate the female physician plight. My father is one. My husband, an anesthesiologist, is one. The male physician-entrepreneur I met with last week to discuss a partnership in my new solo practice with his clinic system is one. These men are the “He’s for She’s” of medicine. And yet, the hurdles are massive even once we women have finally made it to attending status.

Examples of overt sexism abound. As this article notes, the pay discrepancy for the same job and hours worked is blatant (>$100,000 difference). Physicians in specialties such as ER and anesthesia may not appreciate this, as their shifts might be salaried per hour. However, in fields that don’t require a lot of face-to-face patient care and fields which weigh “productivity” (aka patient face-to-face volume and turnover) heavily in the pay, women are often paid significantly less. I’d contend it’s because, in many non-procedural fields, females more often take the time necessary for patients despite the sacrifice to their productivity earnings. We women, frankly, tend to care more about the patient than our paycheck. And yes, there is evidence to back this up. A Harvard study released in JAMA this year showed conclusively that elderly patients admitted to the hospital had lower death rates and readmission rates when treated by female internists compared to their male counterparts. While the numbers are overt, the subliminal sexism is written into the RVU methods of physician reimbursement. Those who care enough to take the time to do the job well inevitably get punished financially.

Let’s forget about numbers. There is overt sexism we women experience daily in how we are addressed and spoken to. Frankly, a man would never tolerate, without having a complete fit, the words and tones I have had to take from coworkers, bosses and patients. Last week, I had a meeting with a hospital system in my town who has been trying to get me to agree to work for them for months without a retainer. We finally met, and I told them about starting my own solo practice instead of employment, but also to discuss how I’d be happy to assist with medical directorship for their SNFist program and inpatient geriatric care improvements. The female care manager told me how she didn’t think what I could offer was necessary from a physician and the male physician said, “I just don’t think you’re going to get anyone to pay for your care out of pocket when it’s something Medicare covers.” (I’m opting out of Medicare.) I don’t think they’re aware of how this came off. What they were trying to communicate is that they aren’t looking for a medical director at this time, and they are concerned for my financial viability solo. That’s what they would have said to me if I were a man. Never would they have insinuated that my expertise as a physician and geriatrician, something unique to this community, were not wanted or needed — it very much is — or that my care was comparable to the the care provided by the non-physician providers who go to the nursing homes and assisted living facilities here. It’s not comparable, and my care is better because I am trained at a much higher level to care for this vulnerable population. No, Medicare doesn’t actually cover the quality of care I provide. So this is blatant. This kind of thing also happens routinely to female physicians of every specialty.

My husband opened my American Academy of Family Physicians CME advertisement in the mail and brought to my attention the fascinating pictures. Here are six of the eight pictures, including all of the pictures featuring women: 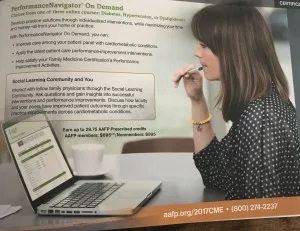 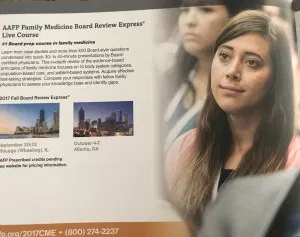 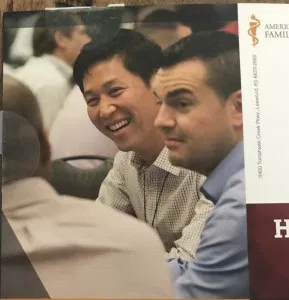 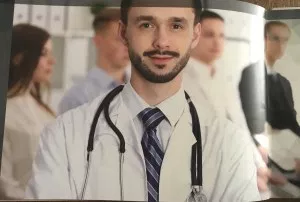 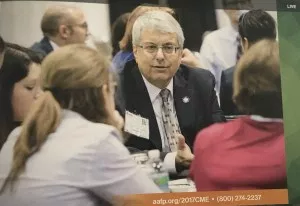 I guess I don’t know if these truly are subliminal because it was my husband who pointed out to me how sexist this seemed — he’s not one to catch subtlety. The pamphlet has a ratio of men to women pictures of 6:2. So the numbers already don’t reflect the reality of family medicine. However, in the entire pamphlet, there are only pictures showing men as smiling, engaging physicians/leaders/teachers. The women pictured are either facing away or with an expression that says, “I am a passive recipient, incapable of worthwhile thoughts of my own or engaging discussion.” Then there is the woman staring at the painful computer CME module with the pen in her mouth. Is she a secretary enthralled by data entry? Why is there not a single picture that depicts a woman physician smiling, engaged, like someone you would want to talk with, or care for you or was capable of teaching you? And this is not a testosterone-driven surgical specialty. This is family medicine, people — where women are more prevalent in the field! Also, it’s not like the pictures are showcasing the keynote speakers (although that is something that is also far too male-dominated). It’s advertising how the AAFP envisions its audience. Even the AAFP does not view women as equally capable of being physicians, leaders and teachers. Their marketing tells us so.

Still today in medicine, even in the fields full of women, the message sent is that men lead in education, discussion and patient care. But truly, it’s the women making the most impact in time-based fields and giving our heart and souls to do so. We are just as capable, just as engaging and it’s time to demand that our fields recognize this before we continue to break our backs in the trenches. 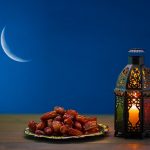 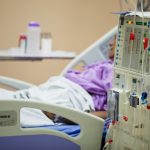 Even if you can’t see sexism immediately, it’s still there
32 comments