I’m not here to tattle. No siree, Bob. I’ll save that for my kids. But what I am here to do is spell out a story in which I ended up down in the dumps.

A medical mistake happened. To me. On me.

I’ll never forget it. I can’t because I carry it with me forever.

Here’s the short of the long:

My obstetrician messed up. She took care of my pregnancy during one of the most difficult periods of my life, medical residency. She missed a shot that should have been given. RhoGam, to be exact.

RhoGam is an injection.

The baby forming inside of my belly was Rh-positive, surrounded by my Rh-negative blood. The purpose of administering the injection would be to basically confuse my body into not “noticing” this inconsistency and move forward normally, without a hitch. Except, in my case, I didn’t get it, and my body wasn’t exactly ok with the scenario.

It looked at my baby as a foreign invader and thus formed antibodies (attacker cells, in a nutshell, like the ones we make when we have a cold) against him. It basically thought his blood cells were a virus and needed to kill them.

How did I not know I needed to get the shot? How did being a doctor myself not prevent me from this terribly unnecessary mistake?

I can’t clearly answer this question, because the guilt of it all still weighs heavily on my shoulders. What I can say is that I put 100 percent of my faith into her hands. After all, I had been a completely healthy woman up until then, with no medical issues whatsoever. I never had to double check anything until then because it just wasn’t ever necessary.

I didn’t even know my blood type. Do you?

Plus, I was in residency, back at the time when resident hours were not limited by laws in place today. I easily put in 80 hours — often more — of work in the hospital, with many sleepless nights. I’m not sure how I did it, and pregnant, no less, but I did. The bottom line was that I was doctoring others, and that in itself, was more than enough.

Something else may have contributed to this, and it’s more of a confession: the fact that I wasn’t ready to be a mom. I didn’t keep a week-by-week tracker of my baby’s progress- as other expectant moms-to-be often do- didn’t caress my belly, or even sing the baby lullabies. I was working 36-hour shifts- treating HIV, alleviating sickle crisis pain, even administering CPR.

In my third trimester, hospitalized with fever, a resident barged into my room and, no less than three times, asked —  or rather accused, in disbelief — if I had been pregnant before, and specifically if I had had an abortion.

I get the confusion, in hindsight, of course. Back then, though, it was nothing short a painful interrogation. To not only discover my body had reacted in a rare way and that this could have been prevented, but to also have my honesty questioned.

They were hoping it was a mistake, that I was an anomaly, and scampering to find an alternate cause, other than physician negligence.

In hindsight — which, in medicine, is always 20-20 — and in speaking with many obstetricians since, it turns out RhoGam is considered an automatic knee-jerk injection to those in the field. It rarely gets missed in this day and age.

But it was! I was missed!

Please excuse the exclamation marks, but my urge to scream out these words fails to be subdued by my need to maintain medical professionalism. It’s an adult-style tantrum. We all need these sometimes because they serve as alternatives to lawsuits and therapy.

After it happened, my pregnancies became high risk. The antibodies my body made were stored forever, consequently multiplying with each one. They waited like weapons, ready for attack. For me, high-risk translated into frequent doctor’s appointments at the high-risk clinic, close monitoring and weekly ultrasounds. There were now the risks of fetal hemolytic anemia, jaundice — as the baby’s blood cells popped-fetal heart failure and death.

This was the future I faced.

I’ll fast forward many years, skip through details in between. The short end of what happened was that. Well, that nothing really happened.

I grappled with my new reality, braced myself for closure, but didn’t get any from the medical side. My pain was supposed to magically disappear, from the OB’s perspective, waved away by the far-away tip of her wand. My dreams of many children were pushed back, painted over by the paintbrush in her hand. Like Pablo Picasso, she created a new reality, all on the frame of my one stretched canvas — a new reality on top of the old.

I learned some valuable lessons from my experience. First, appreciate what you have and try to not look back. When all is said and done, I can’t change what happened.

What I can change is learning how to live with the reality of a situation in the most positive way that I can.

Thankfully, mine came to a happy ending; though I may not have given birth to the five children I always wanted, I did to three beautiful, healthy ones. I do leave out obstetrical mishaps along the way, including those subsequent to my last delivery, and mainly it’s because I’ve come to terms with what has happened and choose to focus on what I have.

Second is how I make things better, as a practitioner, for my own patients. I know how it feels to not have control over what happens to you, because I stood on the other side, as the patient. It sucks. And I know that, back then, as many patients going through a case of medical negligence feel, all I needed was an apology and a hug.

To hear, “I know this happened, and it shouldn’t have. I made a mistake, but I’m here for you. I got your back.” 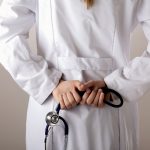 A physician was the victim of malpractice. Here’s her story.
9 comments