About a year ago, Yusuke Tsugawa — then a doctoral student in the Harvard health policy PhD program — and I were discussing the evidence around the quality of care delivered by female and male doctors. The data suggested that women practice medicine a little differently than men do. It appeared that practice patterns of female physicians were a little more evidence-based, sticking more closely to clinical guidelines.  There was also some evidence that patients reported better experience when their physician was a woman.  This is certainly important, but the evidence here was limited to a few specific settings or in subgroups of patients. And we had no idea whether these differences translated into what patients care the most about: better outcomes. We decided to tackle this question – do female physicians achieve different outcomes than male physicians. The result of that work is out in JAMA Internal Medicine.

First, we examined differences in patient outcomes for female and male physicians across all medical conditions. Then, we adjusted for patient and physician characteristics. Next, we threw in a hospital “fixed-effect” – a statistical technique that ensures that we only compare male and female physicians within the same hospital. Finally, we did a series of additional analyses to check if our results held across more specific conditions.

We found that female physicians had lower 30-day mortality rates compared to male physicians. Holding patient, physician, and hospital characteristics constant narrowed that gap a little, but not much. After throwing everything into the model that we could, we were still left with a difference of about 0.43 percentage points (see table), a modest but clinically important difference (more on this below).

Next, we focused on the eight most common conditions (to ensure that our findings weren’t driven by differences in a few conditions only) and found that across all eight conditions, female physicians had better outcomes. Finally, we looked at subgroups by risk. We wondered — is the advantage of having a female physician still true if we just focus on the sickest patients? The answer is yes — in fact, the biggest gap in outcomes was among the very sickest patients. The sicker you are, the bigger the benefit of having a female physician (see figure).

Additionally, we did a variety of other “sensitivity” analyses, of which the most important focused on hospitalists. The biggest threat to any study that examines differences between physicians is selection – patients can choose their doctor (or doctors can choose their patients) in ways that make the groups of patients non-comparable. However, when patients are hospitalized for an acute illness, increasingly, they receive care from a “hospitalist” — a doctor who spends all of their clinical time in the hospital caring for whoever is admitted during their shift. This allows for “pseudo-randomization.” And the results? Again, female hospitalists had lower mortality than male hospitalists. 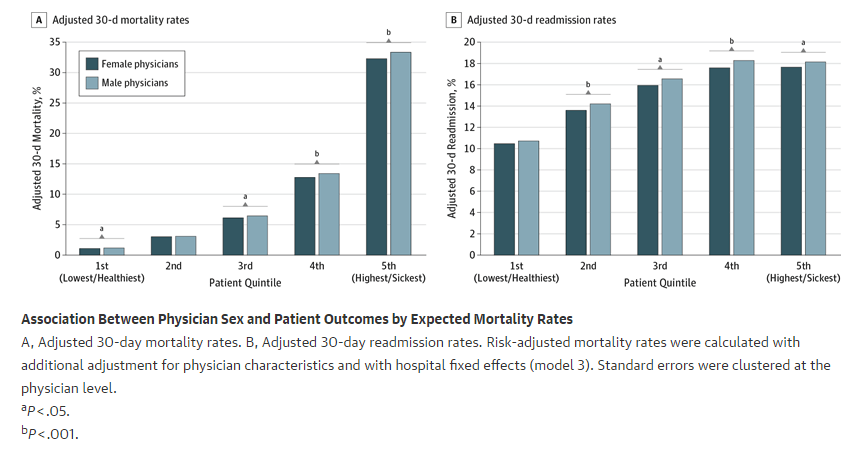 What does this all mean?

The first question everyone will ask is whether the size of the effect matters. I am going to reiterate what I said above — the effect size is modest, but important. If we take a public health perspective, we see why it’s important: Given our results, if male physicians had the same outcomes as female physicians, we’d have 32,000 fewer deaths in the Medicare population. That’s about how many people die in motor vehicle accidents every year. Second, imagine a new treatment that lowered 30-day mortality by about half a percentage point for hospitalized patients. Would that treatment get FDA approval for effectiveness? Yup. Would it quickly become widely adopted in the hospital wards as an important treatment we should be giving our patients?  Absolutely. So while the effect size is not huge, it’s certainly not trivial.

A few things are worth noting.  First, we looked at medical conditions, so we can’t tell you whether the same effects would show up if you looked at surgeons. We are working on that now. Second, with any observational study, one has to be cautious about overcalling it. The problem is that we will never have a randomized trial so this may be about as well as we can do. Further, for those who worry about “confounding” – that we may be missing some key variable that explains the difference – I wonder what that might be? If there are key missing confounders, it would have to be big enough to explain our findings. We spent a lot of time on this – and couldn’t come up with anything that would be big enough to explain what we found.

How to make sense of it all — and next steps

Another important point must be addressed. There is pretty strong evidence of a substantial gender pay gap and a gender promotion gap within medicine. Several recent studies have found that women physicians are paid less than male physicians — about 10 percent less after accounting for all potential confounders — and are less likely to promoted within academic medical centers. Throw in our study about better outcomes, and those differences in salary and promotion become particularly unconscionable.

The bottom line is this: When it comes to medical conditions, women physicians seem to be outperforming male physicians. The difference is small but important. If we want this study to be more than just a source of cocktail conversation, we need to learn more about why these differences exist, so all patients have better outcomes, irrespective of the gender of their physician. 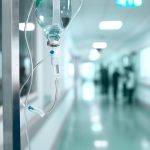 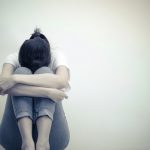 The difference between male and female physicians. Here’s what it means.
6 comments