I was the “TV doctor” at the CBS, NBC, and ABC affiliates in Minnesota and Chicago for 25 years. I was on air several times a day and anchored my own news block.

I did some good. I organized a colon cancer early detection campaign while presenting a series on the illness. One-hundred thousand viewers picked up Hemoccult tests, 25,000 sent them in, and I received a plaque that says, “Thank you for saving 40 lives.”

Very heady … as was the power. I could wake up with an arcane idea (e.g., viewers should know capitated care means every dollar your doctor spends on you is a dollar less for him.) Then if I produced a compelling story, that night one million newly aroused consumers would be reacting to my idea.

I loved it. But I’d also learn that TV news is a poor way to medically educate the public. The medium simply has too many inherent obstacles. (I hesitate revealing them. I did once to a worldwide conference of health reporters. I still remember their shell-shocked expressions. I was never invited back.)

Here are some obstacles I pointed out:

First, viewers don’t watch the 10 p.m. news to learn new information. They watch for the same reason they’ve just watched prime time dramas: to feel emotion. I couldn’t just opine on the risk factors for heart disease. Instead, I had to introduce viewers to a 35-year-old overweight smoking father who now needed a heart transplant and tearfully regretted his lifestyle decisions.

I embraced the creative side of telling stories. But this primacy on emotion (and on compelling video) inherently biased my stories.

Here’s an example. A baby’s mother fights an insurer over covering an experimental bone marrow transplant. Since you lead with your best video, my story is written before I leave the newsroom. I think, “We’ll lead with a tight shot of the baby then go to the mother pleading for her child and then take the story to an office headquarters where a spokesman will present the insurer’s case.”

Technically both sides received equal time. In actuality emotion always trumps reason. In addition, the institution is always introduced second (i.e., playing defense). I produced hundreds of such stories. And no institution, no matter how well-meaning, ever got a fair break.

This demand for patient involvement and good video also limited the stories I could do. I could rarely produce abstract ethical, policy, or “deep dive” stories (in my day they were all derided as “thumbsuckers”).

Also verboten were pieces that only appealed to “niche” audiences. Nothing about orphan illnesses or rare conditions. Topics had to appeal to the broadest possible audiences. Hence an endless stream of stories about obesity, baldness, sexuality, exercise, sleep, nutrition, pet health, and on. All that mattered was the desperate need for “eyeballs.”

The second obstacle to accurate medical reporting is what I called the “breakthrough du jour.” Medical research moves at a glacial pace, but TV news has to be fed every day. The result was a daily menu of overhyped “breakthroughs.” (That trend accelerated when the rise of cable TV forced local stations to fight desperately for viewers.) I told myself I didn’t call the shots; but I regretted creating false hopes.

TV news’ inherent nature also created a third obstacle. By definition, a TV news story defies conventional wisdom (i.e., man bites dog). But I found the result was an ongoing medical see-saw. (“Mammograms save lives … No wait! They’re a waste of time! … No wait! They’re worthwhile if you’re over 50!”) Over time I would give similar contradictory advice about margarine, eggs, salt, caffeine, PSAs, and on. In the end, a jaded audience could hardly be blamed for just tuning it all out.

The fourth obstacle to accurate medical reporting relates to appearance. The first time I saw myself on TV (after picking myself off the floor), I got a haircut, changed my wardrobe, improved my posture, and took speech therapy for years to lower the timbre of my voice. I learned the hard way that appearance counts. Viewers judge someone’s credibility not by their resume, but by their looks and confidence.

That, frankly, doesn’t favor some docs. Many haven’t had to worry about their looks. In addition, during on-camera interviews nervous physicians often become tentative and resort to jargon. The physician and I would be at cross purposes. I was consumed by the need for a single compelling sentence: They were consumed by not appearing too simplistic to their colleagues. The result was too often a waste of everyone’s time.

The unfortunate bottom line is that TV favors bombast and swagger over true knowledge. And that bothered me.

I could go on, but I’ll jump to my greatest frustration with being a TV doctor. I naively thought that if I gave viewers information to save their lives, they would take action. When they failed to, I couldn’t believe it. I thought viewers would cheer the notion they could help themselves more than any doctor could. But empowerment also carries responsibility. I never anticipated how frightening that responsibility was to so many people.

Worst of all, toward the end I found myself doing stories that seemingly endorsed their refusal to take personal responsibility for their own health. My bosses demanded daily 90-second stories about the latest high-tech “magic bullet” cures. (More pats on the back if the story had the word “miracle.”)

I had become part of the problem.  It was a far cry from the mission I felt when I entered TV. I don’t regret moving on.

A bloody baptism into emergency medicine 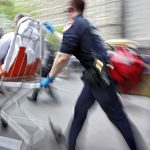