I started November 8th so hopeful. The polls were a comfortable 78. I wore my new berry colored pantsuit purchased especially for the election. I even wore my suffragette sash to work. The last face I saw before stepping into my office was a young woman in her 20s who gave me a thumbs up and that knowing smile that said, I’m with her too! Every woman I met had a gleam in her eye and a spring in her step. There was an estrogen electricity in the air. We were unbeatable.

Until we were not.

As a 50-year-old woman and surgeon, I have felt the oppressive weight of misogyny my whole life. In medical school. In residency. In the 11 years that I fought to get the same salary as my male peers. And even from my mother who felt being a doctor might be too hard.

I cannot remember a time when I have not railed against the patriarchy. At best I am blunt, but often it is shrill or unstable because that’s what they call women who have new ideas or who speak up. The men are disruptive innovators who think outside the box. At one point in my career, a male colleague and I both complained about the same problem. He had thoughtful input and was thanked for his concerns which were promptly taken under consideration while I was unstable and it was suggested that I seek antidepressants.

But Hillary? She was calm and cool. She knew the game better than the men, and she was twice a smart. Where I would have raged against the mediocrity and the petty behaviors of those who pursued her like gadflies she was graceful and simply more prepared than every single one of her detractors. We didn’t just ask her to prove herself to bumbling men on committees who could only lift themselves up by pushing her down she had to prove herself on the public stage more times than any male politician and do it through the distorted lens of patriarchy.

Each time the press cried “email” I heard “female.” Clinton had a likeability problem, who cared that Trump bragged about competitive genitalia groping? Men who made money giving speeches were savvy, she was crooked. Men and women spewed bile about her email server not understanding a thing about it. They ranted about her transcripts, but shrugged about Trump’s taxes. Clinton, the lifelong public servant, was dishonest and Trump, who stiffed many contractors, was a good businessman. Many articles had the truth buried deep in the eight paragraph, but this is the Internet so they might as well have been in Siberia.

And so I cried because it was rigged by the oldest double standard.

I cried because misogyny sells to both men and women.

I cried because the truth is a bore and we are post-factual.

I cried for Hillary because she deserved to be President more than any other candidate who has run for office in her lifetime.

I cried for myself because I longed to see a woman claim her rightful place as a world leader.

I cried because the policies offered by Trump are frightening.

In many ways, I will be untouched by a Trump presidency, but it’s not just about me. I want the whole world to be better not just my world. I want my patients to have the best health care possible. I want everyone else to be able to marry whomever they want as often as they want, although twice was enough for me. I want my kids to have clean air and dry land. I want everyone to have the choice to farm or not to farm heirloom tomatoes.

What lifted me up was looking at my suffragette sash laying discarded on the floor with my pantsuit. I thought about all the women who would have worn a similar sash while they endured beatings and jail and countless humiliations for simply attempting to vote. Their sashes would have been bloodied yet they still showed up. They knew they would be turned away or worse and yet they kept coming back. That glass ceiling required a lot of cracks.

If women gave up the first time we smashed into a glass ceiling but didn’t break through, I wouldn’t have voted, and I wouldn’t be a doctor. We wouldn’t have female lawyers and astronauts and pilots and engineers and authors and bus drivers and firefighters and yes, politicians.

Glass ceilings are tough, but take heart, my sisters, because history tells us they all break eventually and they shatter faster when we share the burden.

Modern suffrage, the election of women not just to our highest office but to all levels of government, is our collective privilege. Pantsuits on and sashes up ladies because we are stronger together.

Instead of repealing the Affordable Care Act, strengthen it 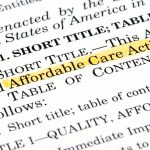 A call to arms for modern suffrage
27 comments