I have a mentor who is quite gifted at getting me to break a sweat in the OR. No matter how well an operation is going, she’ll have me set my instruments down. “If this doesn’t work, what’s your plan B?” We discuss how variations in anatomy, damage to critical structures, or unanticipated pathology could change our operative plan. She challenges me to not only consider plan B, but plans C and D as well. This practice is a welcome reminder that an operation does not always proceed according to a well-organized plan. The same holds true outside of the OR doors. Often, what sets us apart as surgeons is how we handle the unexpected and adapt to changing circumstances. And most importantly, if we are able to do so while maintaining poise.

I am no stranger to change. My childhood was a series of unexpected twists and turns. My father’s drug addiction and my mother’s physical illness left our family in constant flux. Perhaps one of my most vivid memories from childhood is when we became homeless. I recall swimming one afternoon in my grandmother’s pool when my mother announced that we would be moving out. I wore my soaking wet bathing suit as we packed. Hours later, my brother and I sat in the back of the family car as my mom sobbed at the steering wheel.

In my adult life, the lessons continued. My marriage began to crumble in the second year of my surgery residency. I had come to realize that my husband’s abusive behaviors were a threat to my safety. Leaving him was one of the hardest decisions I had ever made. Nothing could have prepared me for what came next: the knock on my door at 2 o’clock in the morning, the group of police officers standing in my living room, the details of his suicide.

“And people never seem to know, what they least suspect is coming next.”
– John Frusciante

I think of my past challenges as the ultimate guide in perspective: Change is a given. A mantra I keep close to my chest. Perhaps more so than any other medical specialty, practicing surgery requires that we accept change. Despite our best efforts, it is difficult to predict what will happen next. A young man with a stab wound to the chest may be talking to you one moment and in asystole the next. A woman recovering from a straightforward partial colectomy may develop postoperative bleeding that requires a take-back to the OR. We learn to make high-stakes decisions at the drop of a hat, using the best information we have at hand. But we are human beings, and sometimes we get it wrong. Sometimes, decisions that were “right” at one time, become “wrong” under different circumstances. As surgeons, we must humbly acknowledge this truth. We must stand at the OR table and focus on the task at hand, rather than on our disbelief or the mistakes we have made.

Surgeons become keenly aware of the unexpected, constantly adapting to changing circumstances during an operation. Despite this, the field of surgery seems unwilling to accept these characteristics outside of operating room doors. As trainees, we are pressured to abandon all uncertainties, often to our detriment. An old surgery adage sums it up well: “Sometimes wrong; never in doubt.” We are often scolded for not knowing, for not being sure. But for those of us who have survived trauma or stood in the face of great adversity, we are forever branded. Despite how tightly you grasp onto your convictions, nothing in this life is certain.

In our field, why do we feel pressure to never doubt? On a busy trauma surgery rotation, I’d run from consult to consult in rapid succession. My patients were sick, my minutes few, and I often left encounters knowing that my conversations had just skimmed the surface. I remember presenting to an attending after I had worked up a particularly challenging case: “I think Mrs. X has a small bowel obstruction, but I’m open to being proved wrong.”

We hadn’t obtained imaging yet, and I was still piecing together her complicated past medical history. My attending was indignant: I had admitted uncertainty, a sign of weakness. However, perhaps our true weakness is being unwilling to accept what we don’t know: “If both parties are in agreement that certainty is best, it’s possible that they’ll [doctors and patients] just blow past the risks of a treatment, or the dubiousness of a diagnosis, for the sake of having an answer.”

Sometimes we get it wrong. Appendectomy is one of the most common surgical procedures performed in the U.S. In 2007 the national rate of negative appendectomy was 8.4 percent. Trauma is no different: In a 2010 study completed at the University of Southern California, 3.9 percent of laparotomies performed for trauma were negative.  I recall operating late one night with one of my mentors, an experienced pediatric surgeon. We discussed the negative laparotomies he had performed for neonates with bilious emesis.  Words that I remember often: “I’ve never regretted a single one of those operations.” The most skilled surgeons I have known have taught me that we can be confident and humble.

“Let me keep my distance, always, from those
who think they have the answers.

Let me keep company always with those who say
“Look!” and laugh in astonishment, and bow their heads.”
– Mary Oliver, Evidence

Sara Scarlet is a surgery resident. 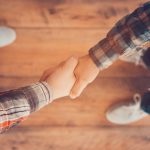 The most skilled surgeons are confident and humble
3 comments