It’s true. Man nearly dies on plane because crew didn’t believe black woman was doctor. The medical fiasco on Delta Airlines has now gone viral after a Facebook post by Tamika Cross, MD, the physician who was turned away as a fellow passenger was unresponsive. Tamika joins a long list of female physicians who have experienced the same discrimination.

Meet a few of these doctors below. 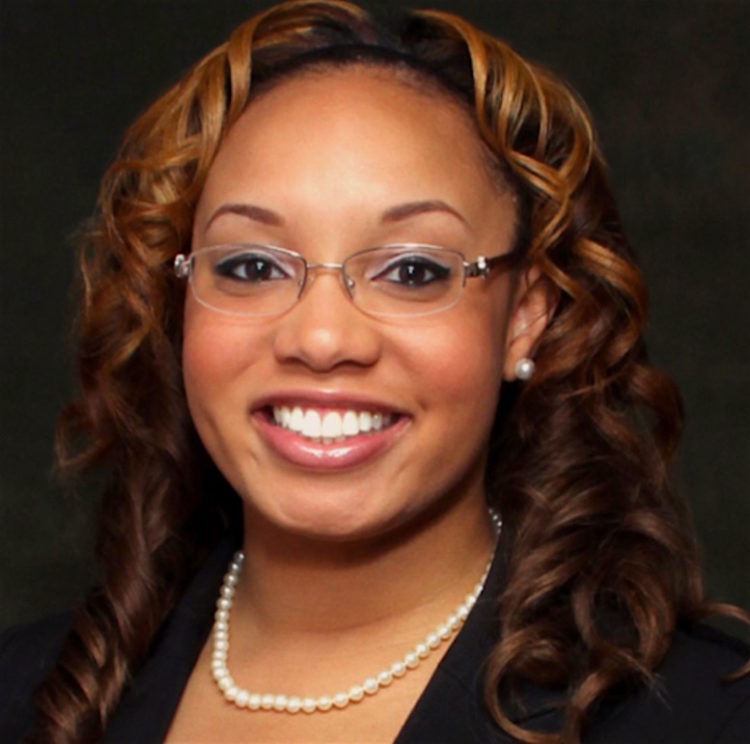 “I was on Delta flight DL945, and someone two rows in front of me was screaming for help. Her husband was unresponsive. I naturally jumped into Doctor mode as no one else was getting up. Unbuckle my seatbelt and throw my tray table up and as I’m about to stand up, flight attendant says, ‘Everyone stay calm, it’s just a night terror, he is alright.’ I continue to watch the scene closely. A couple of minutes later he is unresponsive again and the flight attendant yells ‘call overhead for a physician on board.’ I raised my hand to grab her attention. She said to me, ‘Oh no sweetie put your hand down; we are looking for actual physicians or nurses or some type of medical personnel; we don’t have time to talk to you.’ I tried to inform her that I was a physician but I was continually cut off by condescending remarks. Then overhead they paged, ‘Any physician on board, please press your button.’ I stare at her as I go to press my button. She said, ‘Oh wow you’re an actual physician?’ I reply yes. She said, ‘Let me see your credentials. What type of doctor are you? Where do you work? Why were you in Detroit?’ (Please remember this man is still in need of help and she is blocking my row from even standing up while bombarding me with questions.) I respond, ‘OB/GYN, work in Houston, in Detroit for a wedding, but believe it or not, they DO HAVE doctors in Detroit. Now excuse me so I can help the man in need.’ Another ‘seasoned’ white male approaches the row and says he is a physician as well. She says to me, ‘Thanks for your help but he can help us, and he has his credentials.’ (Mind you he hasn’t shown anything to her. Just showed up and fit the ‘description of a doctor.’) I stay seated. Mind blown. Blood boiling … Supervisor verified that with me afterward. In an emergency, they never ask to show credentials. This could have been life or death. We didn’t know if he had a pulse or anything!” 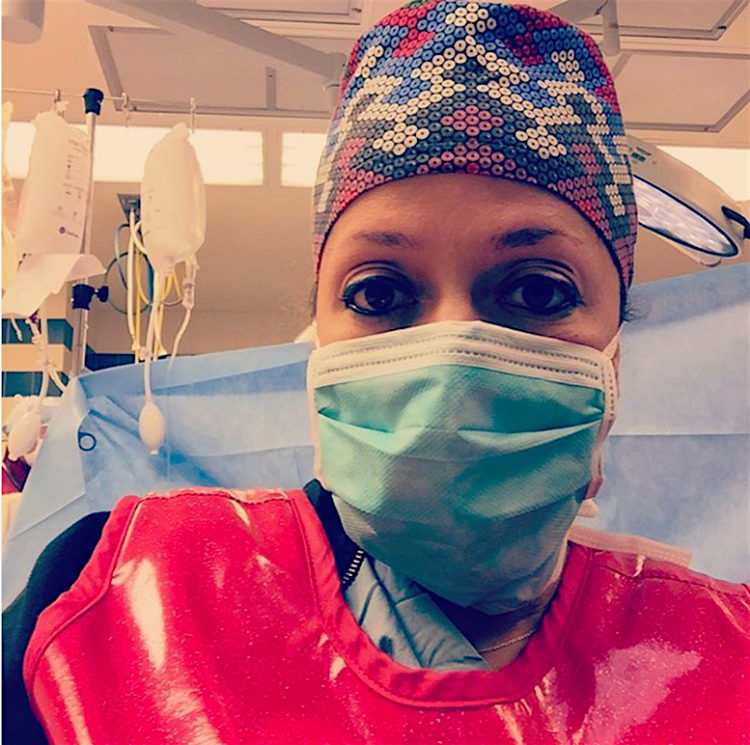 “In response to the horrific treatment of Dr. Tamika Cross on Delta Airlines! I’ve received that same treatment on two different flights while trying to help people in distress. And no, I ‘don’t have my credentials with me.’ You wouldn’t allow me to carry that on! Would far exceed your weight and size requirements.” 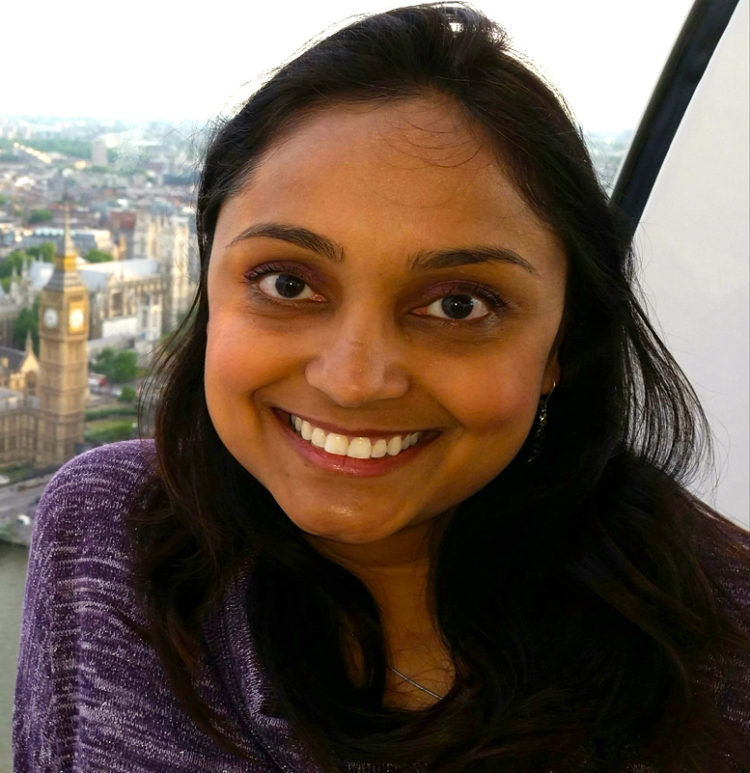 “On an Egypt Air overnight flight from Cairo to JFK, the lady seated in front of me was having difficulty breathing. I heard the commotion but did not understand the conversation since it was in Arabic. I asked if I could help and identified myself as a doctor. I was told by the male head flight attendant to sit down. They then announced overhead asking for medical help. I got up again but was ignored. A male cardiologist, from NY, who was fluent in Arabic offered assistance and was immediately ushered to the woman. He noticed that I was trying to help but was not allowed. While they went to get him the medical kit on board, we spoke. He had trained at my hospital. As soon as he was handed the medical kit, he immediately gave it to me but the flight attendant tried to take it back. He had to intervene in order for me to help the woman; he translated. The woman had started taking amoxicillin given to her for a sore throat and developed a rash, itchy throat and shortness of breath. I checked her blood pressure and lungs.  Then I gave her prednisone, Benadryl, and Pepcid from my carry-on (all of which I carry with me when I travel abroad.) She felt better after 30 minutes. An hour later, the meals were served. I had reserved a vegetarian meal, but when I requested it, the same male flight attendant told me that ‘you people always lie.’ He argued and refused to believe me. He asked for proof, and I showed him my printed flight itinerary. He then brought me a completely burnt tray.” 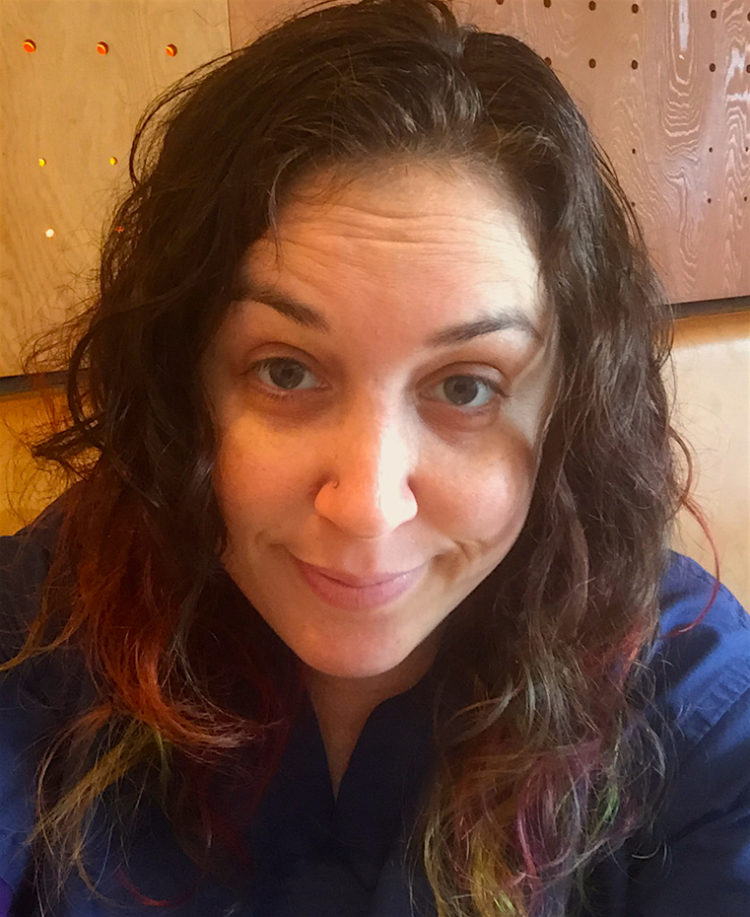 “Same thing happened to me on the side of the freeway. Car overturned, glass in head, pouring blood. People questioned me as I ran over in horror as they kept moving him around to check the wound. I say ‘I’m a doctor. Please lay him down. Someone keep his neck still. Someone hold pressure on the wound.’ The other lady on scene tells me to prove it! Go away, lady, I’m trying to keep this guy from dying from your negligence.” 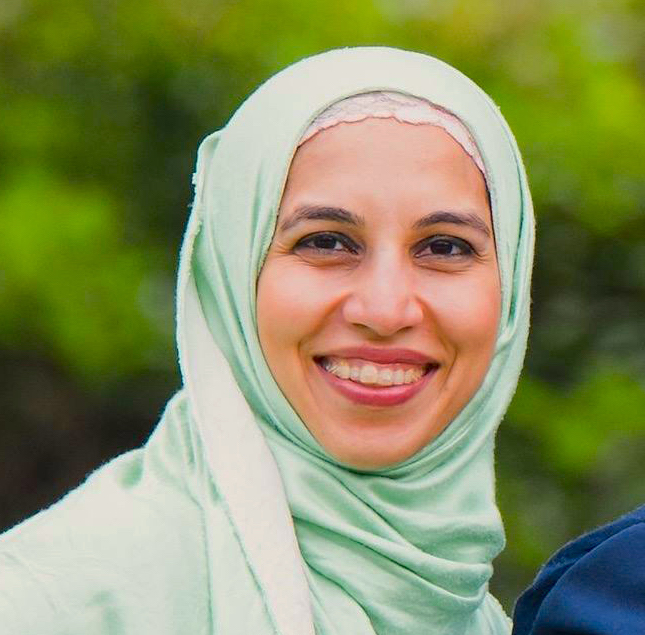 “On an Emirates flight, the flight manager asked for my credentials and wouldn’t let me help. Let a white nurse help though without asking for her credentials. Of course, I helped anyway. It was an elderly male with [emphysema] COPD exacerbation, hypoxic and also having an anxiety attack. We had to calculate if we would have enough oxygen to last the trip without having to land … would not make it if he needed more than baseline (5 L). The manager put him in business class and gave us seats too. We monitored him for several hours; he became unresponsive, hypertensive. I checked an EKG, glucose and after several sternal rubs he woke up. Of course, I lost several hours of sleep on a long flight and a flight attendant had to take care of my toddler while I assisted him. When his shift was over another manager came (he was Arab). He told me to go back to economy class, and he let the white nurse stay in business class the entire flight! Blatant discrimination and lack of respect!” 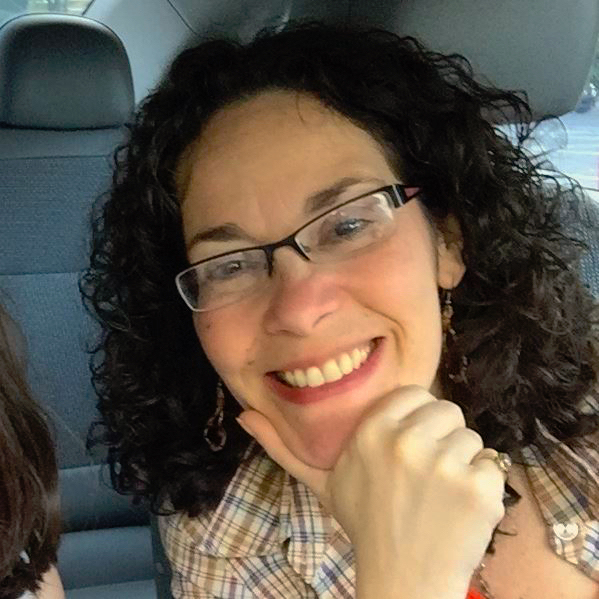 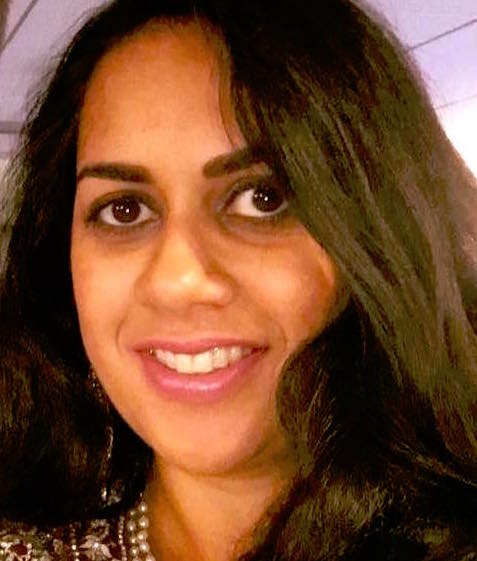 “Had something similar happen to me. A patient syncopized [fainted] right next to my seat. I identified myself as a physician and was pushed out of the way and told to step aside for a male RN to tend to the passenger. I was so stunned, I froze for a few seconds before politely introducing myself to the nurse as a physician and recommended we work together. The flight attendant continued to ignore me and direct questions and offers to get help or equipment to the male nurse. I thought it was just me that had experienced this …” 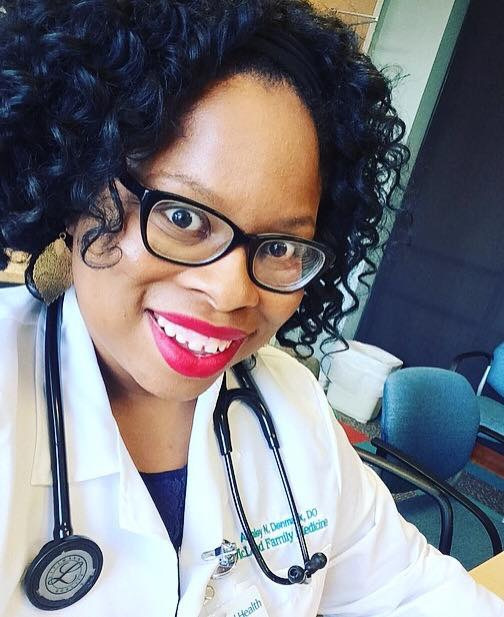 “On Delta 2215, a flight attendant requested over the intercom a doctor or nurse to report to the front of cabin to assist a passenger. Without hesitation, I made my way and was greeted by two Caucasian women and a Delta flight attendant. I quickly asked, ‘What’s going on?’ Then I stated, ‘I’m a doctor. How can I help?’ Immediately, I was greeted by puzzled looks from all three women. The flight attendant asked, ‘Are you a doctor?’ to which I replied ‘Yes.’ My response only left a more puzzled look on the attendant’s face. She turned around and began to talk to another flight attendant. I stood there in bewilderment because someone on the plane was in need of medical assistance and no one was escorting me to the passenger in need. Finally, one of the Caucasian passengers who came to assist spoke and stated that she and the other passenger present to assist were both nurses. Then she asked, ‘Are you a doctor?’ to which I responded ‘Yes’ … again. She immediately responded ‘Well you need credentials to show you are a medical professional.’ I gave a funny look but, remained composed and quickly quipped ‘I have my hospital badge which should be enough.’ The Delta flight attendant continued to look puzzled then stated, ‘We have two nurses here who came first. You can have a seat now, and we will let them handle it. If we need more help, we will come and find you.’ As I walked back, I scanned the cabin. I looked for someone in distress, unresponsive wondering who was this person who needed help. At that moment the gravity of the situation hit me like a ton of bricks. Apparently, the nurses and flight attendants didn’t think I was a doctor. Why else were nurses being allowed to take charge of a medical situation when a doctor was present?  Surely it couldn’t be the color of my brown skin? So here I was, the doctor with 11 years of training being asked to take a seat and not partake in caring for the passenger in need. As an African American female physician, I am too familiar with this scenario. Despite overcoming and excelling academically and obtaining the title of Dr. in front of my name, I still get side-eye glances when I introduce myself as Dr. Denmark. Commonly, I’m mistaken for an assistant, janitor, secretary, nurse, student, etc. even when I have my white coat on.” Read more on Dr. Denmark’s Delta discrimination here. 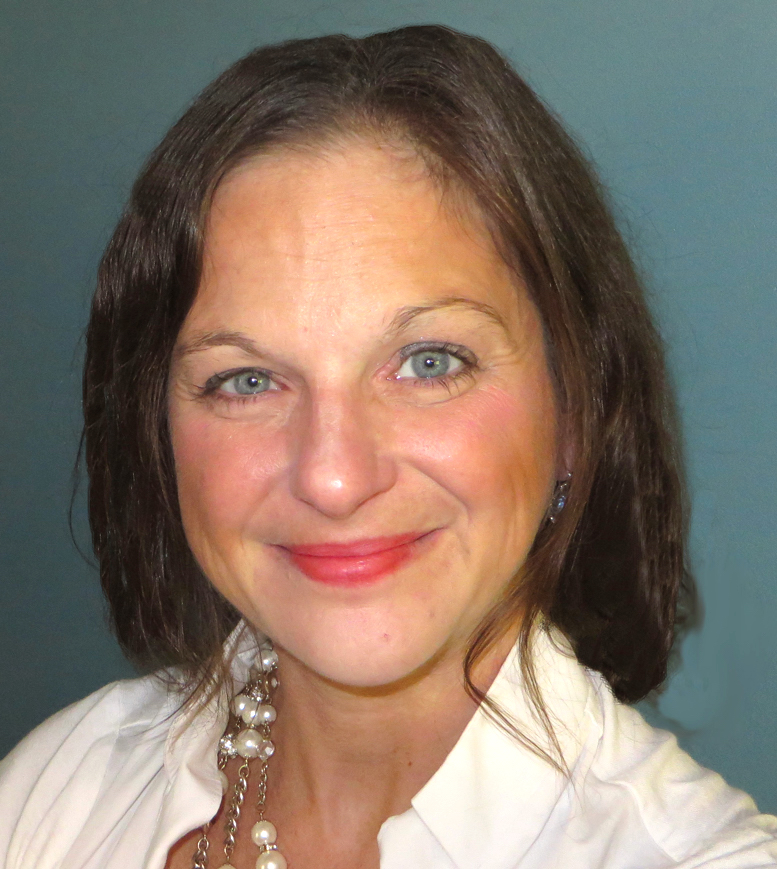 “We were in the middle of the Atlantic on Delta flight 200 to Johannesburg, South Africa, when a man had a GI bleed, hypotension, and became unresponsive in my aisle. Of the four physicians on board, only I had credentials with me, and the purser denied the man care until one of us produced it. I am a urogynecologist, and there was also an ICU physician, but she was told she could not help (she was Latina and similarly petite like me). I told her to ignore the purser and assist. While we worked to stabilize the patient, the purser would not put the lights on to start IVs and adequately see the medical kit. The kit was less than half-stocked with no aspirin, no nitro, nothing. She tried to start drink service while we had a fully naked man in the walkway between lavatories and bloody stool all over one side of the plane. We successfully stabilized him and no sooner had we done so that she angrily declared that we were relieved of medical duty because she was going to deal with the in-flight phone physician rather than us. I had made it clear I wasn’t leaving the area and personally spoke with the ground doc who confirmed that his condition required in-flight assistance. I never heard from Delta until my article got published. It did not go viral like Dr. Cross, but they did call and comp our flight. I never received a thank you from the purser and left the plane with the patient, covered in bloody feces. In the aftermath, apparently the purser tried to cover it up and only reported it as a minor incident. My information was not included.”

Pamela Wible is a family physician who has offered medical care during two in-flight emergencies. Nobody ever asked for her credentials. They did offer her a bottle of wine as a parting gift. She doesn’t drink.

She pioneered the community-designed ideal medical clinic and blogs at Ideal Medical Care. She is the author of Physician Suicide Letters — Answered and Pet Goats and Pap Smears. Watch her TEDx talk, How to Get Naked with Your Doctor. She hosts the physician retreat, Live Your Dream, to help her colleagues heal from grief and reclaim their lives and careers.

When patients get help from the unexpected 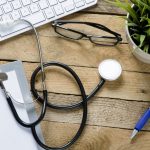