Recently, you — the white-rapping, thrift-shopping, LGBT-activist-ing, Grammy-winning 2013 phenom — teamed up with President Obama to deliver a message to the country about the current opioid epidemic. Now let me preface this by saying, I like you, Macklemore. I like the mixture of equal parts political, earnest and downright goofy that you bring to your music. I like that you seem genuinely self-reflective and even a little uncomfortable with the chart-topping success your appropriation of black music has enjoyed. And I believe that the rampant opioid abuse and overdoses happening now in our country is an issue near and dear to your heart.

You mention in this address — as well as on the track “Kevin” on your wholly underrated sophomore album with Ryan Lewis, This Unruly Mess I’ve Made — that a friend of yours was taken from you in his prime by an opioid addiction that cost him his life. You’re in good company: The recent study the president cites, a national survey by the Kaiser Family Foundation, reports that 44 percent of Americans know someone who has been addicted to prescription painkillers. In your song’s refrain, you rightly track the root of this problem back to its all-too-common origin — a doctor’s office:

Doctor, please, give me a dose of the American dream

Put down the pen and look in my eyes

We’re in the waiting room and something ain’t right

All this is on you, we’re overprescribed

Since I know you pride yourself on being a lyricist who chooses his words carefully, let’s focus on just five: “All this is on you.” I have to disagree. All this is not on us. Doctors are an easy and logical scapegoat for the opioid epidemic: Patient goes to doctor with pain, doctor gives painkillers, patient gets addicted and comes back for more, doctor gives more pain meds, and so on. Patient overdoses — why? Isn’t it obvious? Because of the pain meds the doctor gave him. If only it were so simple. As with most things in medicine and life, the reality is more complicated than the soundbite.

The health care ecosystem that allows many thousands of people to die from medically-sanctioned addiction has diverse players and incentives that give it life. First, consider the 15-minute doctor’s visit, the new standard for outpatient care. It’s hard to inculpate the well-meaning primary care physician who decides to try Percocet for a patient’s debilitating osteoarthritis when all other non-opiate interventions have failed, especially when explaining the rationale for withholding opiates would take all of this and the next visit. One thing your lyrics get right, Macklemore, is that these visits often begin with the words “Doctor, please.” And with health care’s increasing focus on measuring patient satisfaction, denying a patient painkillers could actually hurt a doctor’s reputation and income. Additionally, as Dr. Ronald Hirsch points out, pharmaceutical companies and the Joint Commission are not without blame, either: They encouraged the use and downplayed the harms of opiates for years, no doubt contributing to their proliferation and the current crisis.

We as a profession are acutely aware of the problem our prescribing habits have caused, and everywhere there is evidence of change. In the hospital, we are stingy with opioids, reserving them mostly for postoperative and cancer pain. And good luck trying to get a script for OxyContin in my outpatient adult medicine clinic: We make it clear to patients that unless they are actively being followed by a pain management specialist for a legitimate pain need, we will not fill that role. New York, where I practice, recently instituted mandatory electronic prescribing, thwarting would-be forgers and prescription pad thieves. And since 2013, we have had a statewide database that allows us to monitor what other physicians are prescribing to patients in order to avoid overlap and “doctor shopping.”

Where our views start to align, though, Macklemore, is on the need for treatment: What do we do with all these addicts we’ve created? I’m glad that you found help and lived to tell your story. For many others, the options are limited. Unfortunately, a patient is probably more likely to get treatment for their addiction once they overdose and end up in the hospital, rather than before. I can hardly get my patients an appointment with a psychiatrist to address their substance abuse, much less the comorbidities that drive addiction: depression, anxiety, post-traumatic stress. It’s going to require a new perspective on opioids as a public health issue — a view which is just now beginning to crystallize — as well as a whole lot of funding and policy work to reverse this trend. In the meantime, keep fighting the good fight: I’m with you.

Eric Beam is an internal medicine resident who blogs at The Long White Coat where this article originally appeared. 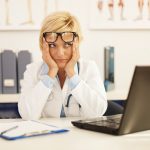 An open letter to Macklemore about the opioid epidemic
2 comments