There’s a code among physicians, both in the private and academic setting. It is that, as a physician — unless you are dying, or very close to it — you show up to work. Taking unscheduled time off, for either physical illness or grieving, is not easy as a physician. Doctors experience a huge amount of guilt and pressure, and rather than experience that, most of us will drag ourselves to work.

The problem is two-fold. The first type of guilt is the one we experience with our patients. In busy offices, some patients have waited several weeks and even months to get an appointment. They have taken time off and arranged for someone to drive them to their visit. We know this. We feel terrible.

Last year, despite getting the flu vaccine, I woke up with a raging fever, headache, etc. Not surprising since, as a doctor, I’m constantly exposed to germs, and it is possible to get sick even after having taken appropriate precautions.

My first patient was scheduled at 8. At 6:45 a.m., I was able to find that patients number and call her. There was no answer, so I left a voicemail. Then, I called the remaining patients on my schedule that day to have them reschedule.

Unfortunately, my 8 a.m. patient, who I was unable to reach, showed up on time to find out there was no doctor to see her. My staff told me she was very, very angry. I called her again to apologize. This time, she answered her phone. Before I could explain, she yelled at me and hung up. Needless to say, she never rescheduled her appointment. I felt hurt, angry, and wronged.

Why are we as doctors not given the same courtesy that we give our patients? There have been countless times I have waited for a late patient, or waited for a patient who no shows without canceling. And, on the flip side, why would a patient want to expose themselves to a sick doctor?

The second part of the problem is the culture of the system. I have witnessed and have experienced the guilt that is felt by doctors who feel that they are burdening their colleagues with “extra” work by not being able to come in. Doctors may also feel guilt for lost income to their private practice due to patients rescheduling surgeries or appointments.

My friend, after losing his mother unexpectedly, returned to the hospital in one week. Another peer took overnight call five days after her the sudden death of her brother. Several of my female colleagues have experienced rude and cold behavior when it came to taking maternity leave. One of my colleagues was operating exactly four weeks after delivering her son.

Now, unfortunately, life happens, and, as physicians, we hate being sick as much as everyone else hates us being sick. But, to go in and work when you are mentally or physically not at your best is bad for all — for patients, administrators, doctors and their families.

Another huge obstacle is that more and more employers are paying doctors salaries that depend on productivity. This basically means the more patients doctors see, the more money they make. If doctors decide to take time off, it is at their own financial loss — be it for vacation, grieving or sick leave. Thus, when they return, there is obvious pressure to see as many patients as possible to make up the lost income that is inevitable with time off.

In 2011, the average medical student graduated with $162,000 of debt (Association of American Medical Colleges). This then accrues interest over 3 to 6 years of residency training. Compounded with decreasing Medicare reimbursements and rising costs of doing business, taking a sick day doesn’t seem to be a reasonable option.

So, until something changes, the majority of us will push through the day with a headache and chills, grieve in a hospital bathroom between patients for a lost loved one, or wait months, sometimes years, to fill that cavity that becomes a root canal.

Saya Nagori is an ophthalmologist. 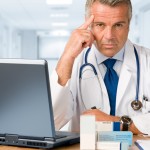