To set the stage, Gawande paints an unflattering picture of the status quo: medical costs are too high, quality is not reliable, service is often poor, and physicians differ widely in their approaches and outcomes for any given therapy. It is a jarring indictment, but one that rings true for anyone who has donned a hospital gown as a patient. We may balk at Gawande’s search for solutions in the dining industry, of all places, yet it was only recently that the distant world of aviation inspired progress in patient safety through surgical checklists. Let us pause for a moment, however, to dissect his message from a neurosurgical vantage point.

Above all else, what Gawande places in his crosshairs is variability in health care delivery. Whether in relation to practices, outcomes or costs (see “The Cost Conundrum”), his implicit claim is that wide variation is the mark of an un-evolved system. Reducing that variation, by means of scale and standardization, is then a means to system-wide improvement. This begs a question, however — is variation inherently bad? Not always. Certain types of variation are natural and unavoidable, and attempts at minimizing them, particularly for complex surgical care, can have serious consequences.

Consider two neurosurgeons at the same hospital. One is disciplined about “timeouts” in the OR and post-operative details such as DVT prophylaxis, antibiotics, and wound care while the other is not. As a result, they differ markedly in their rates of surgical site infection, complications, and hospital re-admission. We can classify this as variation in reliability. There are basic standards of care which prevent needless harm to patients, but physicians have varying success in meeting them.

Now consider two neurosurgeons who both perform a high volume of anterior cervical surgeries for radiculopathy. One always uses autografts to achieve arthrodesis and rarely uses instrumentation, while the other favors allograft for fusion and routinely incorporates anterior cervical plating as well. Due to this, in addition to differing approaches to pain control and length of stay, the two surgeons report very different costs and outcomes after surgery. We can classify this as variability in preference. There are no clear standards for many elements of patient care, so physicians make different choices based on limitations of their skillset, biases in their training, and the availability of particular resources at their institution.

Finally, consider two neurosurgeons who both attempt complex spine surgeries such as severe deformity corrections. One achieves much higher patient satisfaction scores as well as lower mortality and morbidity statistics than the other despite a similar case load. We can classify this as variability in expertise. Complex deformity cases demand an intimate understanding of biomechanics, physical and mental endurance, technical mastery, and a brand of surgical imagination that cannot be codified and standardized. This are qualities intrinsic in surgeons.

Without question, improving physician reliability with respect to standards of care is crucial. Doing so will help prevent the nearly 100,000 deaths each year as a result of medical error. We must avoid the temptation to embrace such standards blindly, however. CareFusion Corp. was recently charged with using financial kickbacks to ensure that their product, ChloraPrep, was endorsed as the standard OR skin antiseptic by the National Quality Forum and the LeapFrog Group despite questionable evidence. As another case in point, the Surgical Care Improvement Project established peri-operative beta blocker administration as a core measure of hospital quality based on a trial that was later discredited. Subsequent research in fact suggests that the practice may be hazardous. Controversies such as these are a reminder that standards of care must always be met with healthy dose of skepticism.

Variability in surgical preference is even more nuanced. Gawande highlights the improvements in outcomes and cost that Dr. Wright at Brigham and Women’s has achieved by taking surgeons’ preferences out of the picture for total knee replacements, such that everyone uses the same prosthetics and the same post-op practices. This is akin to the managerial scrutiny of a gourmet dish in the Cheesecake Factory’s kitchens — the recipe is set in stone, and the same exact evaluation criteria is applied each time.

Is this appropriate for operative neurosurgery? Can our operations be distilled to “best practice” recipes (protocols)? Perhaps so, for relatively simpler operations such as deep brain stimulation, VP shunt insertions, or one-level ACDFs. But what about the removal of a brain tumor ensconced in eloquent cortex, where decisions about the extent of resection rely on cortical mapping, elusive tissue planes, and surgical intuition? Or a cerebral aneurysm clipping, where the surgeon determines the size, shape, orientation, and number of clips based on a myriad of complex intra-operative nuances? It is impossible to design a protocol for these surgeries, because there are too many variables at play for any given patient and success hinges greatly on surgeon expertise. Attempts to force a protocol would drive away anyone capable of doing these surgeries, leaving hospitals with a only limited offering of services (think of a restaurant with a set menu and no capacity for custom requests). More ominously, the propagation of such protocols could discourage surgeons from attempting advanced operations in the first place. If the protocol for a spine operation precludes the use of a particular implant that a surgeon has come to rely on, because he has difficulty achieving spinal stability without it, he may simply opt against doing that type of case. This would cause a “regression to the mean,” where most surgeons focus exclusively on bread and butter operations, reducing the overall talent pool for complex surgeries.

The problem with Gawande’s notion of “Big Med,” referring to an inexorable shift towards health care mergers and acquisitions, is that any errors of blind standardization are quickly amplified. Proponents of the trend will argue that hospital “chains” can disseminate advances with ease — one tweak to a protocol and thousands of patients promptly feel the effects. But if other industries provide any insight, it is that sustainable innovation comes from the bottom up, not the top down. And the lifeblood of innovation is — no surprise — variation. Variation in reliability should surely be rectified, but differences in preference and expertise for complex surgeries are vital to modern medicine. Only when physicians have the autonomy to experiment outside the bounds of known standards and evidence does health care progress. Gawande is fond of saying that physicians must behave less like cowboys and more like pit crews, and there is truth in the analogy. But the soul of American neurosurgery is audacity and individual excellence, and we cannot lose sight of that as the ground beneath us shifts.

Ahilan Sivaganesan is a neurosurgery resident.

Is there any hope for physician-only anesthesia groups? 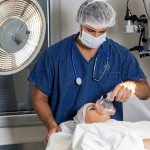 In defense of variation: A neurosurgeon takes on Atul Gawande
8 comments