It’s been a long day in the psychiatry clinic.

Seeing patients is never dull, and each interaction is meaningful in its own way. From the moment they walk into my office to the moment they leave, I try my best to be fully present with the patients sitting in front of me. That means listening to every word, watching every nuance of body language, hearing every concern — both spoken and unspoken. It means bearing their grief as they tell me about the father they’re losing to cancer, their pain as they suffer through profound bouts of depression and their agony as they recall their nightmares of childhood trauma.

It also means putting aside my personal agenda to focus wholly on them, which includes resisting my urge to take notes during the patient interview so that I can save time later, with fewer notes to complete after the patient leaves.

It is a common complaint that doctors look at their computer screens and type on their keyboards more than they listen to their patients. But consider this reality: From the doctor’s perspective, every moment she spends focusing on you, the patient, rather than on the “note” she needs to write up about your appointment, is a debt that must be repaid later in the day. If the doctor can’t complete your note during the 15 minutes you spend with her, then she must add another 15 minutes to the end of her workday in order to finish that note. Multiply that 15 minutes by the 10 to 15 patients she sees in a day and all of a sudden she has missed the family dinner and the kids are already asleep by the time she comes home.

Yes, I know, this is part of what we, as doctors, signed up for. But the documentation burden on physicians has grown tremendously over the past several decades and surely contributes to the high rates of depression and burnout in our profession.

I make a conscious daily decision to prioritize my patients over my notes. But because of that, each long clinic day becomes even longer. I am often unable to leave the office until late at night as I scramble to dig myself out of the mountains of paperwork I must do.In a day and age where psychiatric and medical emergency rooms are overflowing with patients, many of whom are understandably upset over their protracted wait times to see a doctor, the current state of affairs is simply unacceptable. One study of residents found that they were actually spending more time on documentation than on direct patient contact: Almost 70 percent of them spent greater than four hours on documentation, while just 40 percent spent an equivalent amount of time interacting with patients.

Psychiatrists are by no means unique in being burdened with heavy documentation requirements. Every medical specialty deals with this problem. And I don’t blame the doctors who allow their note-taking time to creep into their patient-care time. As a resident physician, I am used to taking a lion’s share of the documentation burden between myself and my supervisors, and I am hopeful that this plight won’t last forever. But some physicians, depending on their own mental state, career stage and other obligations, can’t make the same choice that I do.

That does not make them bad doctors. It just forces them, at times, to make impossible choices between patient care and paperwork. And it’s taking a toll.

Depression among resident physicians has reached an all-time high, with almost a third of trainees now affected. So has physician burnout across the board: More than half of doctors in the U.S. are reporting this syndrome of emotional exhaustion, loss of empathy and low sense of personal accomplishment, which can have a significantly negative impact on patient care. The reasons behind these phenomena, like virtually all reasons for systems failures, are multi-determined and complex. But the fact is that documentation requirements have become onerous, redundant and, as a colleague puts it, “soul-crushing” over the years. This burden not only fails to contribute substantively to patient care, but it can actually hinder it.

I, too, have learned my lesson about prioritizing my notes over my patients. I recall one instance during intern year (the first year of residency), when I took care of a patient whose family was very involved and chatty every morning when I entered his room to examine him. I understood and sympathized with their concern, but began to dread their questions: Each thorough and thoughtful response would result in more time with that patient and family, less time with other patients and families, and pushing back my documentation burden until even later in the evening. So I kept my answers short.

A few days into the hospitalization, I noticed that the family was not as conversant with me as before. When I entered the room later to see them with my supervising physician, I realized why. The supervising physician and the family had developed good rapport, because he had taken the time to answer their questions when I did not. They appreciated and felt heard by him, but not by me. I had stopped being my patient’s doctor, in their eyes. And I felt deeply saddened by that.

Although putting notes over patients frees up time in theory, this experience and others showed me that doing so can actually contribute to burnout. The further away I got from caring about my patients, the less satisfaction I felt with my chosen career, and the less happy I was overall. I’ve shifted this behavior, and it feels better.

A seasoned supervisor told me that, when he was a resident working in the psychiatric emergency room, he used to see more than three times as many patients as we residents see now.

“How?” I asked him, with an incredulous lilt in my voice that could barely be masked.

“Our notes could be shorter back then,” was his reply. (Insurance, regulations and electronic health records weren’t issues back then.)

If neither doctors nor patients value documentation over face time with each other, then why has it morphed from a relatively painless endeavor into a lumbering beast of a chore?

Record-keeping, of course, is an indispensable tool of patient care. Notes relay important information between providers and across visits. They contain essential facts about the patient, such as events that have transpired since the last appointment and the plan until the next one, as well as the patient’s medical and surgical history, medications, allergies, family history and social history. Clinicians refer to past notes to guide future treatment, for instance. In addition to providing purely clinical information, notes are in part sculpted by various schools of regulatory oversight to hold the medical system accountable for its sometimes substantial expenses.

Regulatory oversight, to a reasonable degree, is useful. But in this era of modern medicine, the voices of doctors and patients are being completely drowned out by those of managed care, legal regulations, and economic pressures, among other factors. A report by the American Hospital Association estimates that regulatory compliance requirements add up to an hour of paperwork per hour of patient care — some of it wasteful and redundant — which both distracts from patient care and makes the recruitment and retention of qualified health care professionals difficult.

Although the bureaucratic burden can seem insurmountable at times, there is a lot we can all do to steer the heart of medicine away from notes and back to patients. Surely, among all of us — doctors, patients, family members, friends, insurers — there must be something we can come up with. Let’s start the conversation about how to do that today, before things get even worse.

I wouldn’t trade the privilege of being a doctor for any other job. But if I could choose, I would give those extra hours that I spend on my notes to my patients instead.

Mary C. Zeng is a psychiatrist. This article originally appeared in WBUR’s CommonHealth.

Wanted: Medical Sherpas to guide patients through the unfriendly world of health care 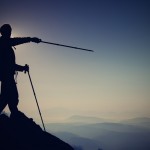