An excerpt from Black Man in a White Coat: A Doctor’s Reflections on Race and Medicine.

On a humid Tuesday morning, Chester arrived at a busy Durham emergency room. While the other patients around him made the usual requests for pain medications, diagnostic tests, and reassurance that they were not about to die, Chester gave an entirely different kind of demand.

“I don’t want no nigger doctor,” he said to a nurse.

I was about a month into my medical internship, the year when aspiring physicians make the abrupt, brutal transition from knowledge-seeking medical student to first responder at the scene of a three a.m. cardiac arrest. I was struggling with this adjustment along with the rest of my colleagues, my mind focused on lab tests, EKGs, and X-rays – tasks that had nothing to do with race. But Chester’s words had unceremoniously shoved me out of 2003, and back into a world that felt more like 1963.

“Verbatim,” the nurse said. “We ought to kick his ass out on the street.”

I glanced over at my colleagues, both of whom looked horrified. Gabe was a nature-loving type from California who had gone to college at UC-Berkley. Audrey was Jewish and very interested in women’s health issues. Both seemed to have progressive sensibilities.

With Audrey leading the way, we approached Chester’s bedside. He looked the part of a hospital patient, dressed in a gown, his body connected through plastic tubing to an oxygen tank, a liter of IV fluid, and a bag to collect his urine. His abdomen protruded as if carrying a full-term child.

A middle-aged woman and young man sat at his bedside. She gruffly introduced herself: “Molly,” she said, frowning at us. “I’m his oldest girl.”

She wore a T-shirt that proudly displayed the Confederate flag. Her face had the weathered look of someone who’d spent too much time in the sun, smoked too many cigarettes, and drank too much alcohol. “This is my son, Thomas,” she told us.

The young man nodded. He had a crew cut and thin forearms covered with menacing tattoos. His shirt pocket flaunted a smaller Confederate flag. To my sensitized eyes, he looked the part of a virulent racist.

As we stepped outside the room, Audrey made a fist. “I think we should trade patients with another team. At least two of the teams here have only white men.”

I preferred to just suck it up and move forward, just as I had during medical school. So I convinced Audrey that we would be fine. All we had to do was stick to the medical facts.

Each day, I updated Chester’s family on his progress. Whatever doubts the family had about me they kept to themselves, perhaps comforted in knowing I was supervised by someone they saw as competent. About a week and a half into his stay, Chester finally acknowledged me when I asked him one morning how he felt. “Okay, doc,” he said. “I think I’m gettin’ better.”

A few days later, his daughter Molly began to soften too, as she asked questions about my personal life. Tension oozed from my back and shoulders. For the first time, I felt relaxed around them. Suddenly I was having a regular conversation with regular people, not feeling like I was running from a mob that wanted to see me locked in jail or strung from a tree.

About a week later, Chester went into cardiac arrest. It happened on a Saturday morning when I was exhausted, my goal to get home before noon. I received a page from one of the nurses just as I was getting ready to leave. “Your patient in room twenty-six has died.”

“You’ll have to pronounce him and make it official,” the nurse said.

When I arrived at Chester’s bedside, his family filled the room. Cloudy eyes turned toward me. I recognized his sisters, daughters, and a few grandkids. I introduced myself to those I didn’t know as I made my way to Chester. His eyes were closed; a blanket covered him from the shoulders down. He had not been dead long enough to look different from how he appeared in life. My medical job was easy: I had seen it done more than a dozen times in medical school. I pulled back the blanket and placed my stethoscope over his chest, where I held it for thirty seconds — no heartbeat. Then I put my fingers across his neck while my ear moved close to his nose and mouth: he had no pulse and was not breathing. The outcome was clear: Chester was dead.

“I’m sorry for your loss.” After I let that linger for a few seconds, I spoke again: “Does anyone have questions?”

What question could they possibly have other than: Why couldn’t you save him? Suddenly on the defensive, I braced myself for racially tinged criticism. But what came from their mouths was the opposite of hate:

“Thanks for all you did for my daddy,” Molly said.

“Thanks, sir,” said Thomas, the grandson who, at first, had looked to me like a budding neo-Nazi. “My granddaddy liked you.”

I nodded, speechless. It was all I could do to leave the room without stumbling against a wall. I’d never expected to hear those words from Chester’s family. Despite the flashes of humanity that Chester showed me toward the end, I had regarded him and his family as beneath me. As many people do, I had countered prejudice with prejudice.

Yet here was Chester’s family, heirs to his bigoted ways, offering nothing but gratitude. I now saw how even racists such as Chester were capable of making genuine, human connections with those they professed to hate. Whether that meant I could now come over for dinner or marry their daughter I have no way of knowing, but ultimately, I had played a vital role in something even greater — life and death itself — and Chester’s family had left our encounter grateful for what I had to offer them.

Damon Tweedy is a physician and the author of Black Man in a White Coat: A Doctor’s Reflections on Race and Medicine.

This video about advance directives is one you can't miss 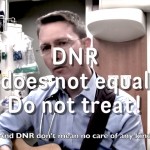 I just turned 26. Here's what I learned while buying health insurance.

Bracing myself for racially tinged criticism, I was surprised by what happened next
4 comments