Loitering in the hallway of my son’s school awaiting his parent-teacher conference, I completely forgot that the woman introducing herself and shaking my hand was an alcoholic.  I forgot that she had visited me in the office a decade prior for a consultation.  I forgot all of it.

What I remembered is that we had gone to high school together.  We had grown up in the same city, in the same neighborhood, on the same block.  We were never compatible socially.  She was gregarious and popular, and I quiet and introspective.  We may have nodded familiarly or said hello if we passed on the street, but nothing more.  We were acquaintances by proximity.

We exchanged pleasantries in the school hallway for a few minutes.  Our kids were of a similar age.  She looked happy.  Healthy.  I glanced at my watch and prepared to enter my son’s classroom when she stopped me, and asked the question that I assume had been hanging on her lips the whole time.

You don’t remember, do you?

She had come to my office nearly ten years prior for a routine physical.  It was a mid-morning appointment, and as I listened to her heart I recognized the faint odor of alcohol poorly covered by breath mints.  I waited patiently till the end of the appointment, and then gently discussed with her my suspicions.

She was drowning in new motherhood.  Her job was taxing.  She was fighting with her husband.  The alcohol originally was meant to help her unwind at night.  With time, however, she was consuming more and more.  She was hiding her habits from her family and friends.

She was an alcoholic.

Her words cleared the cobwebs in the vaults of my distant memory. I remembered telling her that she wanted to face her alcoholism now for her children.  That she wanted to be healthy when they grew up and needed her.   I handed her a few brochures, gave her a few numbers, and scheduled up a follow-up appointment.

I made her promise that she would get help.

As it turns out, she never came back to my office for the follow-up.  But that morning she began a long successful journey toward sobriety.

Now, a decade later, she was thanking me for saying the words that launched that journey.

Years into the practice of medicine, I have spoken millions of words in the exam room and forgotten the majority of them.

I humbly hope that some others have similarly hit the mark.

Exercise for kids is more than just dance class 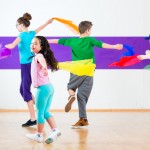 The extremes of primary care can be equally rewarding