Dwight Frost had all the risk factors, plus he had already had a stroke several years ago. His blood sugars were too high, his lipid profile was near the top of the class, he still smoked a cigar now and then, and his blood pressure hovered around 200. He also seemed a little vague about which medications he actually took and which ones he didn’t.

He spoke rapidly with a slight tremulousness in his voice and seemed to be eager for the visit to be over.

On his second visit, he brought a big bag of medications, not just the neatly written list his wife had sent him in with the first time. Some of the bottles were marked on the lid “a.m.” or “p.m.,” others said “BP,” “sugar” and some had a rubber band around them, which seemed to mean he was definitely taking them as prescribed.

His thyroid function and other routine labs were normal. At both visits I recorded his blood pressure in both arms; I had him sit and stand; the first time I saw him, I also checked the pressure in his right leg.

His wife was a retired nurse, he told me, and she also checked her own blood pressure with a stethoscope and a manual sphygmomanometer. She had recorded almost daily blood pressures, all under 140, which she had done on him between his two visits with me. She couldn’t come in with him, because she was actually bedridden from severe arthritis. She rarely got out of the house to see her rheumatologist, the only doctor she had.

I thought for a moment. There was only one way I could resolve this, so I asked:

“Would you mind if I stopped in next Friday afternoon to check your blood pressure when you’re relaxing at home?”

“Anytime, were always home,“ he answered.

Friday afternoon I drove across town in a light snowfall. The faint February sun filtered its way between the snowflakes, which seemed to sparkle and rotate in the air ahead of me without ever hitting the windshield.

The Frost home was a tidy ranch house with an ell connecting it to the garage. Dwight saw me drive up and greeted me at the door.

Ada, his wife, was lying on a daybed near a pellet stove in the paneled room. A large Persian cat was sleeping at her feet.

Dwight walked over to a Canadian rocker near his wife’s bed and sat down. As we made small talk, the majestic cat woke up and moved over to Dwight’s lap. Slowly, almost absentmindedly, Dwight patted the cat and told me she was almost twenty years old.

I noticed that Dwight spoke without the tremor in his voice I had heard at the office, and he exuded a calm that I had not seen in him before.

As I watched from the chair he had offered me, a slow ritual unfolded before me. With the cat in his lap, Dwight placed the blood pressure cuff on his arm and gave the stethoscope to his wife. “Ready,” he said to Ada, and when she nodded, he pumped the cuff up and then slowly deflated it.

I walked over, put my own cuff on his arm instead and pulled out my own stethoscope from the pocket of my tweed jacket.

As I pumped up the cuff, Dwight patted his cat, who started purring, and leaned his head back against the back of his chair.

Slowly deflating the cuff from a high of 240, I listened in anticipation. At exactly 132, I heard the first Korotkoff sound. I continued to deflate the cuff and finally had my answer.

“Your blood pressure is fine,” I said and reached down to record the numbers. “It’s just high when you come into the office. So, why don’t you come and see me in three months, and just bring your readings from home.”

I gathered my equipment. As I looked up again, Ada and Dwight were holding hands. He was not the same anxious man I had seen in the office twice before. The cat was still in his lap, sleeping.

Our health system is changing, and it's a damn shame 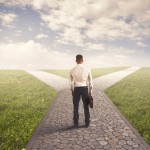 The physician distribution problem shouldn't be a surprise

What this patient needs for a normal blood pressure
7 comments