You’ve likely seen the Jimmy Kimmel “public service announcement” on vaccines. Over 3 1/2 million people have viewed it on Youtube so if you’re not yet one of them you’ll likely add to the tally now. The first 3 minutes of the monologue are spot-on, and they’re also very funny. Jimmy takes a stand against the “anti-vaxxers.” He mentions that some parents are more scared of “gluten than small pox” and references the reality that some schools in this country have 20% of students opted out of some vaccines. His monologue is followed by a series of pediatricians voicing profane frustration. Most people think the video is hilarious, and many of us fired up about vaccines feel a rush when the safety and trust we have in vaccines gets the spotlight like it does here. Jimmy’s script is brilliantly written, and his execution is direct.

Thing is, I didn’t like the video. I was left feeling somewhat uncomfortable and embarrassed for my profession. Immediately I wanted to explain that, even though, many of us are frustrated with where we are on vaccine hesitancy, we really aren’t interested in offending. We will always work to partner with parents –we won’t mock, swear, or intimidate you. Our goal is to support, protect, and cure children whenever we can, and our privileged responsibility is to listen to parental fear and connect families with resources that soothe. This really is why we went to medical school.

It’s exciting when celebrities voice up and stand to talk about vaccine issues that reflect science. It’s especially exciting when they include practicing physicians. Counseling families who are hesitant or flat-out refuse vaccines is a part of the job for every pediatrician. A study published in the journal Pediatrics this week found 93% of pediatricians had reported they’d been asked by parents to skip or delay vaccines in the last month. The current measles outbreak has changed the tone of these conversations for many of us; I’ve written about my new stance because I’m enraged pockets of measles can even occur in 2015. That being said, even though I really do like to swear like these pediatricians when I’m out of public earshot, I’m unsure the tactic of this PSA will do any good for those parents who hesitate to immunize their children according to the tested and safe schedule.

It seems to me that if parenting is governed by love, pediatrics is governed by respect for that love and for the integrity of children individually.

Those who don’t immunize their children because of fear or safety concerns deserve unwavering professional respect. We all suffer when we continue to alienate and divide ourselves. In my mind, our impatience for wanting change faster shouldn’t deteriorate our tenets.

We’ll all do this somewhat differently. Some pediatricians will fire patients who don’t take their advice to immunize.Some pediatricians will stand up against those who do. Some of us think this PSA was spot-on, some of us don’t. But in an email exchange with a group of pediatricians about the video I was most struck by the Maclaren quote included at the end of an email. Ian Maclaren, the pen name of a 19th-centurytury author and theologian, captures and summarizes rationale for mutual respect well. My pediatric colleague detailed the history of the quotation as documented in the Chicago Tribune in 1965: “Most of us are acutely aware of our own struggles, and we are preoccupied with our own problems. We sympathize with ourselves because we see our own difficulties so clearly. But Ian MacLaren noted wisely, ‘Let us be kind to one another, for most of us are fighting a hard battle.’”

To your own Vulcan self: Be true

We must recognize the limits of doctors' work lives 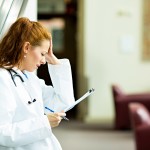 Were the physicians on Jimmy Kimmel professional?
12 comments