Our children will never be the sole judge of our job as parents of course. We are likely our own closest and most fastidious critic. And really it’s just us (and our partners) that can truthfully reflect and evaluate how it goes as we raise our children — what our hopes were when we started on the journey of raising another and where we find ourselves.

And so, however radiant the peaks and successes seem, the anxiety of our choices in this high-stakes job will likely dominate. The angst with how this all goes as our children mature ties our feet together at times, and can feel a little like stuffing big rocks into our pocket as we jump off the dock into the lakes of our lives. We’re hard on ourselves. Sometimes this is good and motivating, centering or stabilizing, and at times it can even be useful when sorting priorities. But sometimes, it’s simply unkind. Some of the best advice I was given after my boys were born was this:

Layers of advice from others have been added onto this since the beginning, and some of the advice that resonates can even haunt me. (“It goes so fast, it goes so fast, it goes so fast” they all say.) And I admit my own critic comes and goes as the boys age, even as we have small successes or experience big failures. (“What was I thinking to not step in with that bully?”) My inner critic is also around as I soak up all the routine, normal and just plain ‘ole regular days in-between.

I was reminded today while at lunch with a mentor that I’m in the golden years with these boys. A time of delicious development, rising curiosity and subdued drama. Six and eight-year-old boys are just fun. “By junior high and high school, it will be different. They’ll be telling you how you’ve let them down and yet they’ll still really need you,” my mentor said. We were discussing how my boys would likely be critical of my choice to work intensely in pediatrics at some point, and that they would also likely share their thoughts about my rigorous travel, long hours or my advocacy and presence in the public. Yes, it seems they will keep me honest and aware of my hesitations with balance. Yes, they’ll soon opine even more than they do today.

He then launched in earnest into a lovely story that stood out for him as a parent (my mentor is 40 years my senior so has volumes of wisdom to share). He said when one of his children was about 30 years of age she phoned him up and said …

Two. Things. Well. He went on to detail that the first thing she shared was her appreciation for his strict rules around viewing TV and his devotion to keeping it out of the bedroom. And then he just started to laugh. We both did.  The reality that a grateful child with whom he has a lovely and close relationship can call him up at age 30 and detail the “two things” he may have done well was humbling. He remarked that he found it so delightful and so off-setting that as she announced he’d done just two things well he was distracted by those emotions. As he’s telling me this I am absorbing it as advice thinking, “OK, I can do that with the TVs and the screens”… then I said, “what was the second thing?” I was on the edge of my seat. Oh the look on his face; that’s when we laughed even more. He’d simply forgotten.

Thing is, our children will be grateful or oblivious to our “parenting” most of the time, and they’ll likely be critical, too. Obviously though, we are often the most severe judges of how this all unfolds. So as you set out amid this brand new shiny year, keep in perspective that you’ll likely be the one with the harshest ruler.

I had to ask my mentor, “Have you asked your daughter since what the second thing was that you did well?” He smiled. “Yes,” he said. She couldn’t remember either.

Patient satisfaction in the ER. Oh yes, this doctor went there. 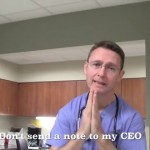 Scared of the flu vaccine? Let's see what's really inside it. 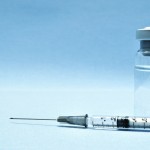