She kept repeating this, from her seat on the examining table.

“I’m so blessed.” I unwrapped the bandage holding on the splint that had covered her arm for the three weeks since the bullet went in above her elbow and came out through her forearm, hitting no bone, touching no major artery.

Homeless. With diabetes that needed insulin, which needed a refrigerator, that she didn’t have.

Vulnerable. A few years earlier, she had been jumped on her way to the clinic; her eye busted. She stayed in the hospital over a week, needing surgery to repair the damage.

“Give me your wallet,” he said.

“I have nothing to give,” she said.

He raised the gun, pointed it at her chest.

She looked at him, knowing she could die. Believing she would die.

Her life lay in his decision of whether or not to pull the trigger.

He moved his arm to the side casually, still pulled the trigger, and walked away.

She ran back to the shelter, so thankful to be alive, and it wasn’t until she was sitting on her bed, shaking, that someone said, “You’re bleeding.”

Three weeks later she came to my clinic, afraid to move her injured arm. The bandage never changed, the wound never checked. She had been told to follow up with me. I was on vacation. She didn’t see anyone else. Aargh.

Another blessing emerged as copious salt water softened the scab on the gauze stuck to the wound, and the dressing could be coaxed away.

No signs of infection. Healthy healing tissue once the scab was gently scraped away with a scalpel.

Her arm was healing — wounded by an unknown assailant, untended by modern medicine.

I cleaned and dressed the wound, referred her to wound care, called the social worker to help with housing and home nursing, and pondered the gratitude this patient felt for simply being alive.

“So many people are getting killed,” she said. “You hear about it every day. That kid killed for his jacket. That could have been me. It wasn’t. I’m blessed. I’m so blessed.”

Gratitude equals an appreciation for life.

When did, “I wasn’t killed by a person with a gun” hit a New Year’s gratitude list?

When gratitude is forged in a low-intensity war zone.

Kohar Jones is a family physician who blogs at Prevention Not Prescription. 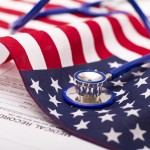