In 1978, under the pseudonym Samuel Shem, psychiatrist Stephen Bergman published “The House of God,” an iconic novel drawn from his medical internship in Boston in the early 1970s. Earlier this year, Dr. Bergman spoke at the commencement of the New York University School of Medicine. With his permission, the following is adapted from those remarks.

I began writing The House of God as a catharsis, to make sense of what seemed like the worst year of my life.

These are times we all have each day, finding ourselves doing things — or not doing things we should have done — and we say to ourselves, “Hey wait a second, why did I just do that–or not?” There were so many of these, I started writing.

Looking back, what have I learned from The House of God?

My generation came of age in the ‘60s. We grew up with the idea that if we saw an injustice and took action together, we could change things: We helped put the civil rights laws on the books, and we stopped the Vietnam War.

In 1973 when we entered our internship, we were idealistic young doctors, wanting to learn, dedicated to treating our patients humanely. But soon we were asked to do things that we thought were inhumane.

We were caught in a profound conflict: between the received wisdom of the medical system, and the call of the human heart. And so, without thinking about it, we resisted. In fact, The House Of God can be read as a kind of medical manual of non-violent resistance.

I have four suggestions for how to stay human in medicine.

The hospitals we entered were large medical hierarchies. In these “power-over” systems, we interns got isolated. Not only did we get isolated from each other and our friends and families, each of us got isolated from our authentic experience of the system itself. We started to think that we were crazy, for thinking it was crazy.

Isolation can mean death — as when Potts, one of the interns, commits suicide. In a power-over system, the only real threat to the dominant group — whether dominance is based on gender, race, ethnicity, class, religion, or sexual preference — is the quality of connection among the subordinate group. So in your training, please remember: Stick together. Connection comes first.

2. Speak up. When we notice injustices and cruelties in the medical system — and believe me you will — speak up. Speaking up is necessary not only to call attention to the wrongs of the system, speaking up is essential for your survival as a human being.

If we see something and say nothing, it will gradually tear us apart. Because others before you have spoken up, your on-call hours are more humane. And believe me, that matters, a lot.

3. Learn empathy. Once, when I mentioned this to second-year Harvard medical students, one raised his hand, “We learned empathy already.” What? “Yes, last year in interviewing. Empathy is when you repeat the last three words the patient says and nod your head.”

How do you learn empathy? By putting yourself in another person’s shoes, feelingly. By seeing, in that tiresome old lady, your mother, and in that cranky child, your son. By finding good teachers who live compassion — and following along behind, like a duckling a mother duck. Realize that any good connection is mutual; the other person is getting as much out of it as you are.

Warning: Studies show that medical student empathy peaks at the end of year two — and goes downhill from there. It’s a real challenge, to stay empathic during the rigors of your residency.

And here’s the good news. You graduates are totally awesome in one big way that my generation was not: You are citizens of the world. You have been everywhere, done everything. To you, foreigners are not foreign.

You are not isolated from, or suspicious of, different people and cultures, you are with them — even if only through your texts and twitters. You are the hope of the planet, and I — and your families and friends here today — are so proud of you it brings tears to our eyes!

So: Stay connected. Speak up. Learn empathy. Learn your trade, in the world.

Let me end with another moment from The House of God.

One of my patients was a middle-aged woman with metastatic breast cancer. The surgeons operated on her, found they could do nothing, and closed her up and sent her back to the ward.

After she woke up, a nurse came to me and said that no one had told her what the surgeons had found, and that I should. I couldn’t face it. I said that it was her private doctor’s job, not mine. I’m not sure who finally told her, but it wasn’t me. That was a “Hey wait a second” moment, an emblematic moment that I’ve never forgotten.

To this day, 40 years later, I’m still ashamed of my turning away, letting her down. And so in the novel I decided to write what I should have done. The Fat Man volunteers to take care of it:

I watched the Fat Man [a character in House of God] enter her room and sit on the bed. The woman was forty. Thin and pale, she blended with the sheets. I pictured her spine x-rays, riddled with cancer, a honeycomb of bone. If she moved too suddenly, she might crack a vertebra, sever her spinal cord, paralyze herself. Her neck brace made her look more stoic than she was. In the midst of her face, her eyes seemed immense.

From the corridor I watched her ask Fats her question, and then search him for his answer. When he spoke, her eyes pooled with tears. I saw the Fat Man’s hand reach out and, motherly, envelop hers. I couldn’t watch. Despairing, I went to bed. Later, after an admission, I looked into the room gain. Fats was still there, playing cards, chatting. As I passed, something surprising happened in the game, a shout bubbled up, and both the players burst out laughing.

You never know when such a moment can happen, and change you as a person and a doctor — it’s still so fresh in my heart. You’re probably saying, “But who has the time to stay with her like that?”

True, and yet time’s a funny thing — it’s really not a matter of time: Studies show that if a doctor’s intention is to listen deeply to a patient, it only takes about 18 seconds to have a moment experienced by the patient of “being with,” of good connection, of “feeling seen” — and then of being more open to revealing personal information.”

That present moment may be the most significant thing we do for someone who is suffering, that moment of mindfulness, what the Dalai Llama calls, “being a beautiful presence.” And hey — these are the moments we live for, yes? And you never know when they might suddenly appear! So be ready — as Hamlet put it, “the readiness is all!”

My new novel, The Spirit of the Place, is about primary care doctors in a small town — a young doctor joining his former mentor in practice. This was a dream of mine, to go back home to practice. It didn’t work out in life, so I did it in fiction.

This is the basic human story. We are all on the same journey. Every one of us will suffer — that’s the Buddha’s First Noble Truth. There’s no way around it. The crucial question is not suffering, it’s how we move through it.

If we isolate ourselves and try to gut it out, alone, “stand tall, draw a line in the sand”, we will suffer more, and spread more suffering around. But if we move through the crucible of suffering with others — with caring others, and that’s where we doctors come in, that’s our job! — we will not suffer as much, we will not spread more suffering around, and understanding will arise, and even kindness and awareness.

This is not a psychological healing, but a spiritual one — greater than your self. Each of you has been touched by it, the spirit, at least once, or you wouldn’t have made it here, now.

That’s the challenge, the thrill, the joy in The House of God: to become aware that the pain and suffering of others is the same as our own; to become aware that if we are ignorant of our neighbor’s sorrow, we bring sorrow to our own door; and with that awareness, to take anger and spin it to compassion; to give solace, to heal. For at our best, we don’t just doctor, we heal.

Stephen Bergman is a psychiatrist and, under the pseudonym Samuel Shem, author of The House of God.  This article originally appeared in What Works For Me.

Our health care system makes no sense. But what if it did? 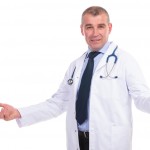 5 ways how doctors can round with nurses 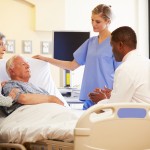 Stay human in medicine: Lessons from The House of God
5 comments