I have a patient who is a full blown sufferer of health anxiety. He firmly believes he has full-blown AIDS after a single extramarital sexual contact (non-genital) one month prior with a woman not known to have HIV. (Reality check: The other person didn’t have HIV, the specific contact as described was ridiculously unlikely to have transmitted the virus had it been present, and AIDS takes months to years to develop after actual HIV infection.)

He once believed his kitchen counters were radioactive because of a news reports of toxic spillage into a creek next to his housing development. He was also concerned about having inhaled particles of styrofoam doing a project with his kid, which then made their way through through his body and were coming out in his saliva. In short, he has it bad.

But he called a few weeks ago with a new concern: His blood pressure was high at another doctor’s.

He wasn’t having any symptoms (surprisingly); no headaches, no chest pain, no visual disturbances. He was just very worried about his blood pressure, which wasn’t even inappropriate.

Of course, we don’t make a diagnosis of hypertension on a single reading. By definition, the blood pressure has to be elevated on three separate occasions before the diagnosis can be appropriately made (in the absence of symptoms and/or evidence of end organ damage). Could have been too much coffee, not enough sleep the night before, energy drinks. Any number of things can cause transient blood pressure elevations.

I sat him down and explained all this. Somewhat to my surprise, he took it fairly well. I suggested that he begin a program of regular exercise (walking 30 minutes a day, every day) and limit sodium in his diet, then come back in a few weeks and we’ll check it again.

Chances are that he does indeed have essential hypertension (he has a positive family history, as do a great many people; it’s a very common condition) and that he’ll wind up on medication for it. But I was impressed that he finally came in worried about something worth worrying about.

So how do you know when a hypochondriac is really sick?

Generally because they present with something completely different, or with objective findings (like abnormal vital signs) instead of merely subjective complaints. But the only way you’re going to know that is to keep open the lines of communication with them, even as frustrating and time-consuming as it can be.

Even though I know this guy generally isn’t going to have something serious, whenever he calls I go ahead and see him, listen to his concerns, perform an appropriate examination and testing when necessary, before blithely reassuring him nothing is wrong. There usually isn’t. Except when there is. 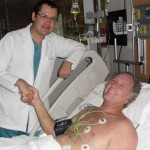 The value of continuity clinics cannot be understated

How do you know when a hypochondriac is really sick?
6 comments