When I was a medical student, I worked with an non-government organization (NGO) in Rwanda to provide medical care to women with HIV. Nearly all had witnessed their family members murdered during the genocide, and many became afflicted with HIV as a result of rape. Our initial focus was on getting antiretroviral therapy to these women, but we quickly realized that while it was important for them to have access to medications, they couldn’t be healthy unless they also had enough food to eat. They couldn’t stay safe unless they had shelter. They couldn’t be well unless we addressed their psychological trauma.

As an emergency physician working in inner city ERs in St. Louis, Boston, and Washington, DC, I see this same problem every day. My 8-year-old patient, Kami, comes in wheezing and short of breath. She has asthma, and two years ago, she lost her inhaler. She and two brothers are staying with her mother’s cousin; lots of people smoke in the house; and she’s missed several days of school. I can give her a breathing treatment and prescribe an inhaler, but how do I help her achieve good health?

Over the year, I’ve seen 19-year old Byron in the ER three times. The first time, he was stabbed on the arm. It was a superficial cut; he received some stitches. The second time, he got in a fight and broke his hand. I gave him a splint and sent him home. The third time, he was shot twice in the abdomen. I stabilized him and sent him to the operating room. I wonder when he will be back for another violent injury. Is there a better way to help him than to patch him up, piece by piece?

Then there’s Josephine, a 38-year-old single mother of four. She was told four years ago that she has cervical cancer. Between her three part-time jobs and taking care of her children, she had no time to see a doctor. Her boss threatened to fire her if she left in the middle of the day. She tried to call a specialist, but they wouldn’t take her insurance. By the time she comes to the ER, her cancer had spread to her intestines and her lung. We set her up for treatment, but what does it say about our society that her disease had to progress this far?

Our health care system is good at providing short-term fixes for problems. We pride ourselves in having the most advanced technologies in the world. We can provide this excellent care for the few hours the patient is with us in the ER, hospital, or clinic — but then the patient is on her own and back to the same problems, 24-hours a day, 365-days a year. Numerous studies have shown that it’s where we live, learn, work, and play that have a far greater impact on our well-being than the treatment delivered in a hospital.

I chose to be an emergency physician because I want to provide excellent care to everyone, regardless of ability to pay. We in the ER provide a necessary service, but it’s far from being sufficient. We need comprehensive strategies that promote health and target problems “upstream.” We need to recognize that health does not exist in a vacuum, that it is intimately tied to issues such as literacy, employment, transportation, crime, and poverty. An MRI here, a prescription there — these are Band-Aids, not lasting solutions. Our communities need innovative approaches to pressing issues like homelessness, drug addiction, obesity, and lack of mental health services. 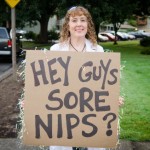 Help patients by addressing the health of the community
3 comments