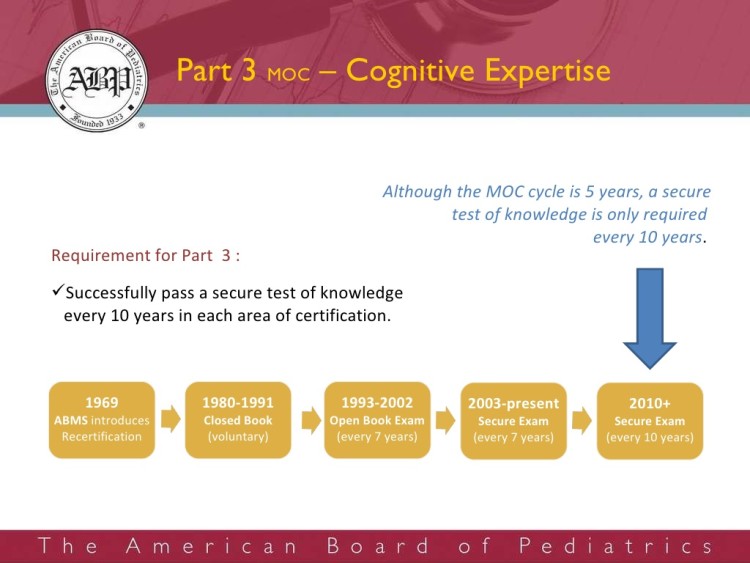 Up until 1988, being board certified in pediatrics was a voluntary process of passing the board exam once in a career. The American Board of Pediatrics (ABP) apparently realized this process didn’t make them much money, so in 1989, they abruptly ended “lifetime certification” and required an open book test and the associated fee every seven years.  I was in pediatric residency during this maintenance of certification (MOC) stage, the mandate was an annoying and costly change from lifetime certification, but an open book test seemed manageable for a busy pediatrician to complete.  I watched my attendings work on their open book tests over the lunch hour.  It was collegial and almost fun.

The ABP apparently realized this process didn’t make them enough money either, because in 2003, they abruptly required a secure exam every seven years. This was a bigger deal, requiring participation in expensive $1,000 board review courses, offered conveniently by the same academic doctors who established this new requirement. Secure exams, in addition to costing more to administer and prepare for, also require taking time away from the office and patient care for the actual test.

So what is continuous MOC? In addition to now costing $1,200, it’s an incredibly convoluted, continual process of complying with the boards and financially supporting their friends.  It requires a secure examination every 10 years, an utterly humiliating process where practicing physicians are treated like criminals. I was subjected to a body scan, I had to lift my pants above my knees and show my bare arms to the proctor. For administering this humiliation, Prometric received $1.7 million from the ABP in 2013.  Every 5 years it also requires 40 points of “approved part 2 activities” and 40 points of “approved part 4 activities” and then another 20 points of either part 2 or part 4 Activities.  But the 10 year test may not coincide with the 5-year MOC requirements. Confused yet?

Approved part 2 activities are incredibly difficult online questions that are largely designed for pediatric subspecialists.  Approved Part 4 activities” are purportedly practice improvement modules that take 2-4 months to complete. Part 4 activities involve pulling charts, enrolling patients into study groups without their consent, doing the study and reporting the data to the boards.  Currently, there are nearly 400 research projects being done on children through part 4 MOC. Not only is performing research on children without consent immoral, it is costly in both time and money for the patient.

In an effort to show improved care, the physician is compelled to order testing that may not be necessary for the individual child and ask for more frequent office visits than is necessary. One has to question the validity of any practice improvement module that a physician is participating in upon threat of losing their hospital privileges or insurance participation.

So when will this end? What will the next iteration of MOC bring? It’s my aim to never find out, because I’m no longer part of the compliant lot. I look at ABP president James Stockman’s $1.3 million salary and realize they will not voluntarily stop forcing us to participate in their testing and their research projects.  The outrage against MOC and this clear overstep and monopoly by our boards is rising. State medical societies are passing resolutions to end MOC, it’s only a matter of time before the American Medical Association has to listen to us. State legislatures are taking steps to protect physicians from these unaccountable outside corporations. A federal lawsuit against the AMBS by the Association of American Physicians and Surgeons is moving forward. Physicians are connecting together nationally through the work of Change Board Recertification.

History shows mission creep and the hubris it reflects invariably results in catastrophic failure and retreat by the offending force. December 17, 2015 is the day the American Board of Pediatrics will finally retreat from my career and my care of patients.  My next cycle of MOC starts on that day, and my answer is “I will not comply.” 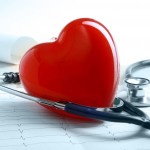 MKSAP: 65-year-old woman with prodrome of pain on the tip of the nose

The mission creep of maintenance of certification
47 comments