Every player in the medical arena has found itself challenged by conflicts where one’s self-interest competes can skew what should be pure advice.   This issue is not restricted to the medical universe.  Every one of us has to navigate through similar circumstances throughout the journey of life.  If an attorney, for example, is paid by the hour, then there is an incentive for the legal task to take longer than it might if the client were paying a flat fee.

The fee-for-service (FFS) payment system that had been the standard reimbursement model in medicine has been challenged and is being dismantled because of obvious conflicts that were present.  (This is not the only reason that FFS is under attack, but it is the principal reason offered by FFS antagonists.)  Physicians who were paid for each procedure they performed , performed more procedures.   This has been well documented.  Of course many other professions and trades still operate under a FFS system, but they are left unmolested.   Consider dentists, auto mechanics and plumbers and contractors.

FFS is not inherently evil.  But, it depends upon a high level of personal integrity which, admittedly, is not always present.   In my own life, I often hope and pray that the individual who is offering me goods or services is thinking of my interests exclusively.  Am I living in fantasy land?

The Rand Corporation released a study in May 2013 that demonstrated that emergency rooms accounted for about 50% of hospital admissions during the study period from 2003-2009.  When I have posted on emergency medicine in the past, it has stimulated a high volume of responses, some good, some bad and some ugly.

I think it is inarguable that emergency room (ER) care wastes health care dollars by performing unnecessary medical care.  As a gastroenterologist, I affirm that the threshold for obtaining a CT scan of the abdomen in the ER is much lower than it should be.   And, so it is with other radiology tests, labs, cardiac testing, etc.

I understand why this is happening.  If I were an ER physician, I would behave similarly facing the same pressures that they do.  They face huge legal risks.   They are in a culture of overtreatment and overtesting because they feel more than other physicians that they cannot miss anything.  They argue that they have only one chance to get it right, unlike internists and others who can see their patients again in a follow-up visit.  If an ER physician holds back on a CT scan of the abdomen on a patient who has a stomach ache, and directs the patient to see his doctor in 48 hours, what is the ER physician’s legal exposure if the patient skips this appointment and ends up having appendicitis?

Keep in mind that we should expect that ERs to have higher hospitalization rates of their patients, since their patients are much more likely to be acutely ill.

But even accounting for the sick patients in the ER, I think there is a significant percentage of ER patients who should be sent home and are sent upstairs instead. This would be an easy study to perform.  Compare the intensity of testing between the emergency room and a primary care office with regard to common medical conditions.  I would wager handsomely that the ER testing intensity and admission rate would be several fold higher than compared to doctors’ offices.  Want to challenge me on this point?

Even though I understand why ER docs do what they do, it is a bleeding point in the health care system that needs a tourniquet.

It is clear that ER physicians are incentivized to admit their patients to the hospital.  Of course, they might be “encouraged” to do this by their hospitals who stand to gain financially when the house is full.  Leaving the financial conflict aside, when an ER physician admits a patient, he is completely free of the risk of sending a patient home who may have a serious medical issue. I am not referring here to patients who clearly should be admitted, but to the large group of patients who most likely have a benign medical complaint, but the ER physician advises hospitalization “just to be on the safe side.” These same patients if seen in their own doctors’ offices would never be sent to the hospital to be admitted.

Where’s the foul here?  Here are some of the side effects of unnecessary hospitalizations.

How can this runaway train be brought under control?   First, let’s try a little tort reform.   Second, pay a flat rate for an ER visit.  Under this model, if the ER physician orders an MRI on a patient with a back strain, the hospital swallows the cost.  Finally, when hospitals are penalized financially for hospitalizing folks who should have been sent home, we will witness the miracle of a runaway train performing a U-turn on the tracks.

While the Rand Corporation’s results are not earth shaking on its face, my intuition, insider’s knowledge and a tincture of cynicism all converge on the conclusion that for too many patients the ER has become a portal of entry in the hospital.  Is the greater good served if the ER is a revolving door or barricade?

For physicians, the applications of tablets are endless 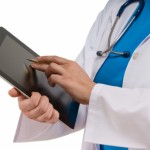 The problem with an anti-medication bias

Why the ER admits too many patients
22 comments