The first set of professional responsibilities for physicians was a “commitment to professional competence.” While I would truly like to believe this article was sincere, increasingly I am concerned it was a regulatory ploy — one that is more concerned about financial gain than patient benefit.

I have spent time reviewing the 2011 IRS Form 990  “Returns of Organization Exempt from Income Tax”  (the last ones publically available) for each of the member boards of the American Board of Medical Specialties (ABMS) and the ABMS itself.  I used the website Guidestar.org to gather these.  I assembled the salaries and benefits of the senior executives from each of these organizations in descending order and was surprised what I found (here is the complete 2-page pdf of the data for your review).

No more than the top three executive salaries of these organizations represented over $16 million in total compensation in 2011 alone.  But even more troubling was the inverse relationship that existed between the top-paid executives of these private ABMS member boards and the 2011 compensation for working subspecialty physicians they are supposed to represent. Recall that pediatrics, family medicine, and internal medicine are consistently some of the lowest paid physician subspecialties.

Here is a chart I made of the top 10 board members’ annual income compared to the same subspecialty physician salaries in 2011 as reported by Medscape: 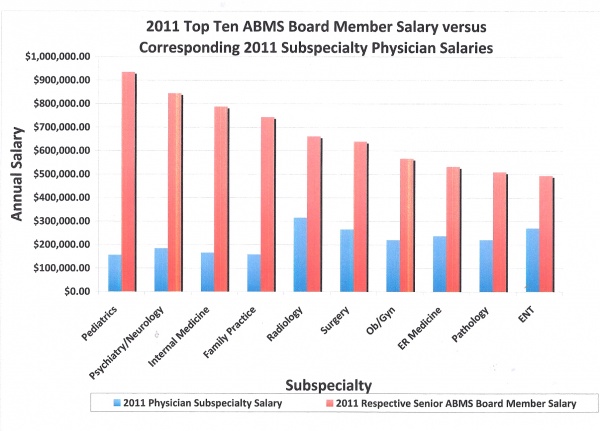 Clearly, the U.S. physician credentialing system as it exists now overwhelmingly rewards people with regulatory oversight rather than those who provide patient care.  Was this the intent?  More specifically, was the intent of the ABIM’s medical professionalism manuscript to line the pockets of the ABMS member boards in lieu of social justice?  What kind of justice is this?

The answer now is not so clear.

To add insult to injury, realize that front line physicians are increasingly burdened by very high medical school and residency debt for much of their career.  As part of their rite of passage into their subspecialty, they must pay the credentialing fees that pay the salaries of these regulators.  Should we insist our doctors pay such high fees to support these expensive salaries?  How might patients be affected, especially when they have reduced access to doctors who must undergo repetitive certification and re-certification exercises.  How do patient’s benefit when the certification process appears so flawed?

To me, it seems that we are not seeing a definition of medical professionalism in the credentialing juggernaut that these private organizations have created.

We’re seeing the definition of greed.

Why do I only get 10 minutes with my doctor?

How to design a better hospital