Doctors today are often accused of being uncaring: Their eyes are glued to their computer screens and their attention is focused on test results and technology instead of patients.

But some doctors care too much: A seasoned cardiologist blogs about letting his emotions lead him astray in keeping an elderly patient on life support too long. Was it his emotional attachment to the charming, elderly woman, or was it professional hubris, Dr. Sandeep Jauhar asks himself.

Sir William Osler wrote a hundred years ago about the mindset behind the conduct of skilled, seasoned physicians. He used the ancient word Aequanimitas, derived from the Latin words “aequus” (even) and “animus” (mind/soul). Every religion values the concept, and many of them use the actual word, equanimity, as do teachers of Buddhism and yoga.

Osler wrote about the levelheadedness required of doctors:

Imperturbability means coolness and presence of mind under all circumstances, calmness amid storm, clearness of judgment in moments of grave peril, immobility, impassiveness, or, to use an old and expressive word, phlegm. It is the quality which is most appreciated by the laity though often misunderstood by them; and the physician who has the misfortune to be without it, who betrays indecision and worry, and who shows that he is flustered and flurried in ordinary emergencies, loses rapidly the confidence of his patients.

Some people have taken this to mean that Osler somehow didn’t care deeply for his patients, but he emphasized that this was not a call to be uncaring:

Cultivate, then, gentlemen, such a judicious measure of obtuseness as will enable you to meet the exigencies of practice with firmness and courage, without, at the same time, hardening “the human heart by which we live.

In Osler’s time, many more diseases were incurable than now, and he spoke to medical students about the limitations and uncertainties of medical practice:

A distressing feature in the life which you are about to enter, a feature which will press hardly upon the finer spirits among you and ruffle their equanimity, is the uncertainty which pertains not alone to our science and arts but to the very hopes and fears which make us men. In seeking absolute truth we aim at the unattainable, and must be content with finding broken portions.

This acceptance of not knowing and not being able to control the ultimate outcome of our efforts has become unpalatable for some in health care today. We are now workers in a medical industry, based on a manufacturing paradigm. And the goals of this industry are not necessarily those of its “customers” — our patients. Corporate quality metrics can clash with patients’ desires.

Just like Osler spoke about equanimity in the face of suffering and the ravages of disease in the early 1900’s, we may want to apply it to the modern frustrations of doctors today; if we cannot control the system of health care where our patients’ and our own lives intersect, we risk descending into a spiral of frustration. Borrowing from Buddhist writings, there is an alternative to despair today, too, in equanimity from Frank Jude Boccio, teacher of yoga and Zen Buddhism:

Without this … it’s easy to fall into compassion fatigue, helper-burnout, and even despair. Equanimity allows you to open your heart and offer love, kindness, compassion, and rejoicing, while letting go of your expectations and attachment to results. Equanimity endows the other three brahmaviharas (sublime attitudes, Buddhist virtues), with kshanti: patience, persistence, and forbearance.

True equanimity is being stirred in our hearts by the needs of each one of our patients. But we must not be shaken into despair or resignation by their suffering, by the limitations of medical science, or by the shortcomings of a health care system we cannot control. 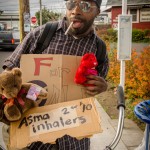 New feminism is about women, work, and the will to be authentic

When doctors care too much
2 comments