The decline of medicine as a profession began when it became legal for doctors and hospitals to advertise.

Apparently it all started when an Arizona lawyer sued for his first amendment right to advertise his services. In 1977, the US Supreme Court ruled that states could not prohibit advertising by lawyers.

This opened the floodgates for all professionals. Soon advertising by doctors and hospitals became common.

I don’t know what it’s like where you are, but I can’t listen to the radio without being bombarded by doctors advertising their wares like car dealers and ads for bogus “university” hospitals.

Just like car dealers, every hospital in my area is “#1” in something or other. Often more than one hospital is #1 in the same specialty.

Here’s a sobering number. In the first half of 2011, hospitals in the US spent $717 million on advertising. This is despite the consensus that hospital advertising has not been shown to be effective at generating business. In fact, hospital CEOs admit that much of their advertising is aimed at stroking the egos of their doctors or boosting staff morale.

Regarding advertising by doctors, I don’t know if that works either.

When I was in private practice in the late 1970s and early 1980s, advertising by physicians was mostly limited to the telephone book’s Yellow Pages (younger readers may be excused for a minute to Google the term).

I eventually stopped listing myself in the Yellow Pages.

In addition to wasting a lot of money, hospital and physician advertising is harmful because it creates unrealistic expectations among patients. A case in point is the ongoing debate about the supposed, but yet unproven benefits of robotic surgery. The ad below appeared in an airline in-flight magazine. Do you think it is effective? Do you believe it? 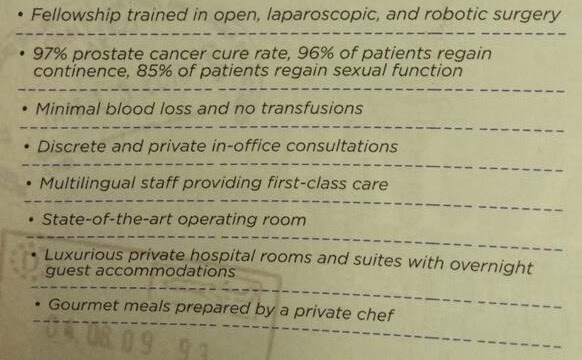 Although there is no proof that robotic surgery results in better outcomes than traditional laparoscopic techniques, hospitals have marketed robotic surgery by having potential customers play with the robot in such places as shopping malls and minor league baseball stadiums. (For a comprehensive look at robotic surgery advertising by hospitals, check out the Health News Review).

The public is flooded with advertisements promising miracles that often cannot be delivered. Disappointment surely follows

Is this the only reason for the medical profession’s fall from grace? Of course not, but it certainly hasn’t helped.

If advertising by hospitals and doctors disappeared tomorrow, we would all be better off. 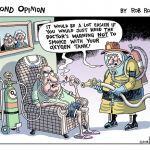