I had always thought I could never be a great doctor because I felt too emotionally bound to my patients. It was impossible for me to hold back tears when feeling that gut wrenching empathy for families mourning the passing of their loved ones. Because it always seemed as if I were the only resident moved by these scenes, I reasoned that this was an unprofessional impulse that prevented me from being the calm, scientific, quick thinking doctor that exemplified the model physician.

This perception is so exalted in medicine, that it was the motto of my medical school’s residency program: Aequaminitas. Based on an essay of that title by Sir William Osler, it means unperturbability. They urged us to become that ideal doctor who had that, “coolness and presence of mind under all circumstances, calmness amid storm, clearness of judgment in moments of grave peril, immobility, impassiveness.” It was these doctors who had the expertise to heal their patients, not ones who were so “weak” as to weep with a patient during life and death situations.

My last day of residency was my most memorable. I was rotating on the intensive care unit where a 21-year-old Mexican immigrant boy was dying of end stage testicular cancer that had spread throughout his body. His stomach was swollen from liver failure, he was in a deep coma from insults to his brain, and infection had spread throughout his blood and body. For days, we struggled to keep him alive — tethered to life support, with virtually every organ maintained through artificial means. He was the sole breadwinner of his large family, and they were completely unprepared to let him go. His mother threatened to kill herself if her son died, and his brother begged to me every day to let him donate half his liver to his sibling.

He died during rounds on my last day. Seared into my mind was the image of his mother throwing herself onto the floor and hitting her hands and head on the floor, howling with sorrow. His father swept their daughter into his arms and ran out of the ICU with unbridled angst.

Every doctor in the room stood there watching in silence. I tried with all my might to control my tears. Blinking frequently. Thinking about hard medical facts. Staring at the ceiling. But it was not possible, so I quickly excused myself to run into the supply closet to weep in private. When I returned, rounds went on as if nothing had happened.

A recently essay by David Bornstein, “Medicine’s Search for Meaning” resonated tremendously and brought these memories back to the fore. In it, he describes the need for a culture change within medicine to embrace emotions and provide compassionate care. His article and others have noted how a lack of humanism in medicine contributes to burnout and low physician satisfaction. Disillusioned physicians who initially pursued medical careers to connect with and help people, instead find themselves in a health care infrastructure dominated by bureaucracy and little time for patient interactions.

In order for programs such as the Healer’s Art, to counter the dehumanizing aspects of medicine in a physician’s professional life course, they must consider expanding to residency. Residency is the time when young doctors experience for the first time that terrifying sense of responsibility for making life and death decisions in the middle of the night, and having to tell a parent that their child has died.

These unforgettable experiences are watershed events in a doctor’s life, as they are the moments where their actions directly impact patients, rather than in medical school where they are chiefly the apprentice watching it being done. I had taken the Healer’s Art in medical school, but by the time residency rolled around there was little opportunity to circle back and reflect upon those lessons.

There is little time and space in the harried life of an intern to think about these sorts of things. Non-clinical time is packed with curricular essentials on the fundamentals of medicine. Yes, it is critical that a doctor understand how to treat high blood pressure and manage liver failure. But as the article stated, it is arguably as important to the therapeutic relationship to cultivate caring doctors who not only feel compassion, but also feel comfortable expressing it.

Perhaps more importantly, creating no-judgment spaces for dialogue amongst residents allows for mutual understandings of common experiences, which in my experience was completely alien in residency. I had always felt like there was something wrong with me for feeling emotions. I felt like everyone around me had a confidence and assurance that I never had, and did not experience the self-doubt I did when patients did poorly. Only upon reading Bornstein’s article did I realize that I might not be alone.

Elizabeth Dzeng is a general internal medicine fellow and can be followed on Twitter @LizDzeng and on her self-titled site, Elizabeth Dzeng, MD, MPH. 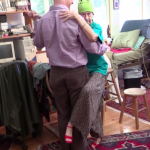 Why care must conform to patient values and cultural preferences

Bringing emotions back into medicine
5 comments