It was the third year of medical school. Month two. First afternoon of my primary care clinic, first patient. I felt overwhelmed and unprepared until I saw the brief chart note for F. He’d had a positive tuberculosis test for an employment physical, with a follow-up negative chest x-ray, but he was required to be on intensive, two-drug treatment for six months to prevent developing the condition. This was the initiation visit, to explain and give him the drugs, draw blood for liver function tests, and see him back in a month after the test results and to give him a new prescription. Easy. TB. Mid 30s, no other medical problems, and nothing else to do.  Even I could do this.

When I entered the exam room, F was sitting hunched over in the chair, wearing shorts and a basketball t-shirt slightly torn at the collar. His reply to my hesitant introduction and hand was a mumbled rush of words in an anxious, unsteady voice.

He hadn’t been to the doctor in years … maybe not since the high school football injury I noted in my thorough past medical history. He’d never taken medications, and he was terrified. He’d heard that these might affect his liver and he was afraid of that. He had trouble sleeping and took something herbal for it, but he differentiated that from “medicine.” He was nervous about the new job that had required the TB test in the first place – working as a night guard at a homeless shelter – and he was nervous about being at the doctor at all.

His initial blood pressure was a little high, but that was probably understandable given his fears. He didn’t care or notice that I was a student and almost ten years younger. To F, I was the one in the (albeit short) white coat, the one with the power and responsibility to allay his fears. To F, he could have been one of my sickest patients of the day. Everything I had considered “routine,” including a screening laboratory test, was a point of concern that needed to be specifically addressed.

And so we started.

Over the six months that we worked together, F continued to worry about his liver, though once I called him with the results of the first tests (slightly elevated, but close enough to normal), he started to relax. We talked about new strategies for his insomnia; the herbal sleep aid contained valerian root, which can have hepatotoxic effects, so my attending was concerned about interactions with one of the TB medications.

On subsequent visits, F’s blood pressure was still high. Acknowledging his continued (though much lessened) anxiety at being in the clinic, we worked out a plan in which he would check his blood pressure at a pharmacy near his house at least three times over the next week and bring in the results. He was worried I’d use the numbers as a direct route to new medications.

By the end, through diet and some exercise, tricky to work in with the job, he had brought the numbers into normal range. He was sleeping better, less anxious, and he’d accepted the (very) occasional Ambien to get him through the toughest days of becoming nocturnal at the shelter. And after every visit, I walked out to the desk with him to make sure he was given my last appointment of the day, to maximize the sleep he could get before going to work. Though F had only come in to prevent developing TB, over those six months, we worked together to address his anxiety, blood pressure, and sleeping and exercise habits. He got better, and I couldn’t have been more impressed with his own efforts. I told him that.

F always called me “doctor.” After re-explaining and re-insisting that, no, I was a student, first name is fine, I’d given up. One visit, a few months into our time together, I knocked, walked in, greeted him, and started on the usual early questions, how are you, how’s work. He replied, then looked at me. “How are you, doctor?” I was floored. It wasn’t the cursory question that doesn’t want an answer, but it was one of genuine interest and care. It was the first time a patient had asked me how I was.

It felt the same later when patients in the hospital would comment on how late I was still there and ask when I got to go home. Patients taught me that I, too, am part of the doctor-patient relationship. And there were evenings when I left clinic and could barely contain my skipping across the parking lot. 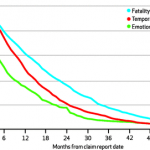