Standing up from my computer terminal to go see another patient, I caught a glimpse of a small, spindly frail woman being rolled by paramedics into one of my shock and trauma rooms.

Very calmly, I remarked, “That woman is dying.”

The medical student who was rotating with me was unnerved that I would make such a pronouncement out of a mere casual observance, “Oh my goodness! How can you just say that?”

“Well, I just know,” I said, and motioned her over to see the patient with me.

The paramedics identified her as “Mrs. Jones” and quickly gave me a report while she was still on their stretcher: 78-year-old female, advanced colon cancer, not eating or drinking for 3 days, barely responsive, sent in after home health nurse called the cancer doctors about her condition. Patient is on active chemotherapy. Family had no advance directives.

Visibly uncomfortable with my comfort, the medical student stood back as I leaned in close to Mrs. Jones and held her hand. She was really a pitiful site — 80ish pounds, gray-hued skin, swollen legs and breathing rapidly. The sound of bubbles and mucous in her airway muffled her voice for the only clear words that I would ever hear from her: “I’m dying.”

“Yes, you seem to be,” I said in my softest, gentlest voice. “What can I get for you? Are you in any pain?”

To each question, she shook her head. But she could not communicate anything beyond this, so I could not readily gather her wishes.

I ordered oxygen, labs and IV access while I tried to figure out what to do next. Would this be aggressive intervention, comfort care or somewhere in between? I wasn’t sure because she was clearly not on hospice, there were no advance directives, her husband wasn’t there yet, and there were no records of her in our computer to help me sort out my next urgent medical course of care for her. But, I did have the name of her oncologist, so I called him up.

“Hey, Jack (we are very collegial at my hospital), I’m taking care of Mrs. Jones here in the ER and I don’t have any records on her to understand the big picture of her care goals and plans.”

I continued, “I have to tell you, that she is in really bad shape.  Frankly, she appears to be actively dying and I didn’t know if you had discussed comfort care options with her before.”

Without pause, he responded, “Well, I haven’t discussed advance directives with her and her husband. But I really don’t think she is ready for comfort care only just yet. She is has been coming to the office all week for fluids and responded well to a round of chemo last week.”

I about fell out of my chair.

This was the first failure for Mrs. Jones.

How could someone have advanced cancer and never have had their doctor discuss advance care planning with them? Isn’t this a form of “moral” medical malpractice? Or was this an extreme case of medical paternalism at its worst?

Even worse, this oncologist had been seeing her frequently. Did he not see where she was on the map of her illness? Was he unable to see the forest for the trees? I mean, I looked across the hall and could tell that Mrs. Jones was dying, even before she told me herself. Didn’t he even have a hint of the same gestalt?

So, that was fail number one, from an oncologist: failure to help Mrs. Jones and her family plan and prepare.

Failure number two came from me.

When her husband arrived, I sat him down in the closest quiet space I could find and after a short “ease-in” period, I stated the bottom line: “She told me herself that she is dying, and I believe her.”

I waited for his response.

He said, “I have seen a lot of people die and I was thinking that she is dying. But at the same time, I really want to get her hydrated and try to get her nutritional status up.”

“Mr. Jones,” I replied, “I really think this is it. I think she is dying no matter what we do at this point. If she was my mother, I would only choose medications to make her comfortable.”

When I asked him what he thought Mrs. Jones would want if she could communicate it (substituted judgment), he said, “No CPR or breathing machine, but she would want to try everything else.”

So, here is where I failed; I entered a DNR order and let my conversation stop there. I let Mr. Jones’ preconceived hope for recovery, planted by the oncologist’s silence, to go unchallenged further. This led to Mrs. Jones going to the ICU for aggressive IV fluid and pressors (chemical blood pressure support agents). The family, limited by visiting hours and falsely expecting a turn-around with aggressive IV therapy, went home for a break.

However, instead of “turning around,” Mrs. Jones became unconscious soon after they left.

She was going to die, as I had known from the start. But now she was alone, except for the ICU nurse and the pulmonologist who saw her next — the doctor who unbeknownst to himself, provided the final failure for Mrs. Jones.

The pulmonologist at least recognized that Mrs. Jones was dying and appropriately honored her DNR order, but wrote these words in her chart “There is nothing more I can do for her … family called to come in.”

How did we arrive at a place where the doctor doesn’t think there is anything to do for the actively dying patient? Do we think that if we cannot order an IV drug or put in a central line that there is nothing for us to do? Doctors still hold a priestly role in society whether we accept and fulfill this role or not. It is high time that we take this mantle back upon us and be hell-bent on making sure that our dying patients are having “good deaths,” with as much devotion as we give to “saving” our patients and attempting to give them a “good life.”

It's a miracle: The connection between saints and doctors 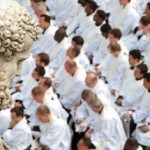