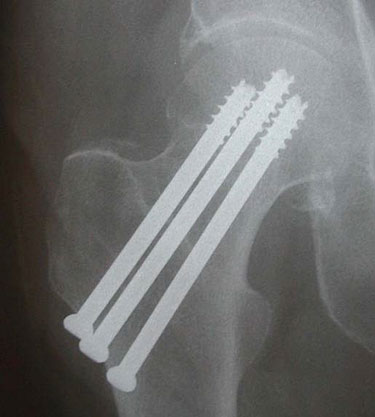 Six months ago I posted a story about a demented 94-year-old patient who’d fractured her hip. She’d lost more than thirty pounds in the preceding months and had already had a collarbone fracture from a previous fall.

Her son wanted her to be made comfort care only, and avoid a trip to the operating room since she was likely within six months of death and was immobile (bedbound) even before her hip fracture. She was going to be referred to hospice. We called off the orthopedic consultants who had been kind enough to recommend (and set her up for) hip stabilization.

I felt like this was the right course of action, and the family members (the ones I’d met) supported this decision. The patient appeared comfortable, able to sit up in bed and hold conversations (albeit demented ones), and not in any distress from her fracture.

The next day, I came to the hospital to find out she was already on the operating room table to have her hip pinned. No one had called me to discuss the change in plan.

I was furious. I felt betrayed by my orthopedic colleagues, who hadn’t seen fit to discuss their thinking or the change in planning (or the subsequent conversations with the family) with me. After all, I was the physician in charge of the case, the one legally responsible for the decision making and the outcome.

I’ve learned a lot from the case, and from my posting of something so fresh and full of emotion. Namely, that with the perspective of time, I now see that it was inappropriate of me to:

I apologize for my boorishness. I was quite angry, and I let it get the best of me.

Many people wrote asking what the resolution of the case was, and what the upshot of my post-hoc conversation with orthopedic colleagues would be.

I spoke with the department chair, after he’d had ample time to review the case and hear from the players.

I respect his approach and fact-finding, and he acknowledged that the communication over the patient’s fate (and consent to surgery) was mishandled. But he also helped me see the situation through the eyes of an orthopedic surgeon, which addressed my concern about their motivation(s). I will tackle his points one by one:

Hip fractures are a local problem. At this one 500-bed hospital in a medium-sized American city, there were more than 800 hip fractures last year — more than 2 per day. The weekend before I spoke with the chairman, there had been seven hip fractures.

Orthopedic surgeons are not motivated by money when it comes to hip fractures. Unlike much of orthopedics which provides elective surgeries, hip fractures are a form of trauma, and therefore do not conform to surgical scheduling. Orthopedists perform fracture repairs as add-ons to their regular cases, and most surgeons don’t like to perform them as they occur at off-hours, over and above their regular caseloads. Medical outcomes in hip fracture improve the sooner they are repaired; therefore the addition of time pressure to these cases is another stressor for surgeons.

In the case I blogged about, the orthopedic group collected $819.27 in professional fees (i.e. the doctor’s charge) for the pinning of the 94 year-old patient’s hip.

“Half of that goes to taxes, another quarter to overhead,” the chairman told me.

That leaves a collection of about $205 net for the procedure. The implication is that no one is getting rich repairing hip fractures.

Communication is a two way street. Much as I was displeased with the lack of communication in this case, the chairman provided several examples of where internists had simply not communicated with his team regarding a patient’s care. He’s absolutely right about this. It’s a fail for all of us.

They have created a center of excellence. One of the doctors who read my initial post works at the hospital in question. He pointed out, correctly, that not  pinning the elder woman’s hip (even though she was emaciated, demented, and fragile) would be cruel. She would have pain with any position changes and likely develop bedsores. The standard of care is to repair hip fractures, not let them heal (they actually can!) over time. The time cost (and risk) is too great.

That physician (an internist) has partnered with the orthopedic group to form a center of excellence in hip fractures, devoting resources to tackling this growing and costly problem in a systematic fashion. This is a great response–and I’m pleased to work and teach at a hospital that’s ready to tackle problems like this.

At the end of our chat, the chairman handed me copies of pages from the patient’s chart.

How exercise benefits kids with ADHD